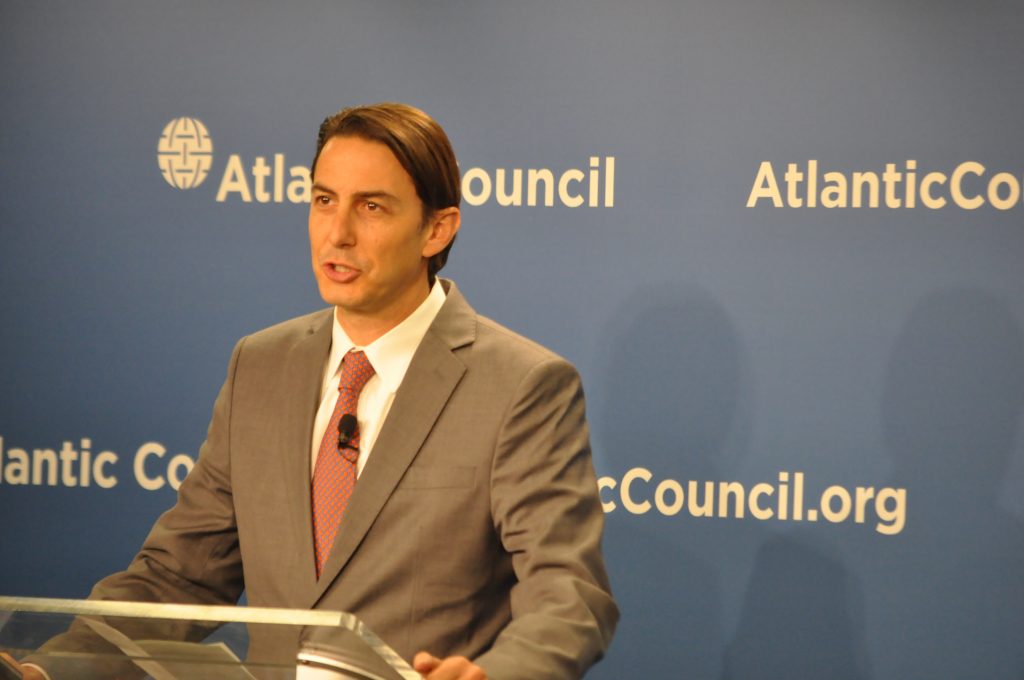 Europe must diversify its energy sources to avoid the threat of Russia again shutting off its gas supply, said Amos Hochstein, the State Department’s Special Envoy and Coordinator for International Energy Affairs.

About one-third of Europe’s gas comes from Russia, which has used the supply as a political weapon in its disputes with Ukraine. “It happened in 2006, it happened in 2009, and therefore it happened again in 2014, and there is no reason to believe it will not happen again. The way to prevent it from happening again is to change how Europe does its own business,” Hochstein said at the first meeting of the Atlantic Council’s Global Energy Center on January 8.

Russia’s annexation of Ukraine’s Crimean Peninsula last year and its intervention in southeastern Ukraine were a “reminder once again to Europe: ‘If you don’t do something about the fundamentals of your energy supply this will continue to happen,’” Hochstein said.

Describing Russia’s decision to shut off gas to Ukraine in June of 2014 as “not a unique event,” Hochstein said Europe must create “new infrastructures that can allow … for gas and other sources of energy to come into Europe and compete with Russian supplies.”

There is no reason why Russia couldn’t continue to supply energy to Europe, he added. “It just has to play within a market system.”

Hochstein: US Not Blocking Russia in Europe

Hochstein said US efforts with the European Union and Ukraine are not aimed at blocking Russian energy supplies into Europe.

“Russia will continue today, tomorrow, and for the foreseeable future to be an important supplier of energy products, not just gas, into Europe,” he said.

“If you have a fair-market competition, that’s the way to have a real sustainable market for Europe with options, that the threat of a shutoff does not play a disruptive role and is not used for political purposes,” he added.

In December, Russian President Vladimir Putin announced a decision to scrap plans for the South Stream natural gas pipeline to Europe. Instead, Gazprom, Russia’s top gas producer, will construct a pipeline to Turkey.

Richard L. Morningstar, the Founding Director of the Global Energy Center and moderator of the discussion on January 8, asked Hochstein why Russia “blinked” on South Stream.

“Europe took a strong stand on what was in its own interests, and I think that Russia understood that it was going to be able to build new pipelines and new infrastructure with Europe [only] if they played by European rules, by the rules of the game,” said Hochstein.

“Europe, for their reasons, stood up and said, ‘Here’s what the regulatory system is. Here is what we are going to allow. And here is what is in our interests as Europe for energy security and diversification of supply,’” he said.

South Stream was not a diversification of supply, Hochstein said. “It was taking the same gas from the same fields to the same end customers by using new pipelines.”

“If you are going to spend $45 billion on a new system of pipelines that is not creating new markets or new pathways for new gas then, as a recipient, you have got to ask yourself, ‘What is this largesse? Why are they so interested in giving me $45 billion worth of infrastructure not expecting to ever make that money back? And that’s when you have to ask that question and when you ask that question you say ‘Alright, this does not serve my interests,’” he added.

Cheaper Oil and Its Risks

Meanwhile, global oil prices have seen the biggest slump since 2008 dropping to below $50 a barrel. Despite the falling prices, Saudi Arabia, a top producer, has continued to pump oil.

By not cutting production Saudi Arabia’s actions could have a detrimental effect not only on countries like Russia and Iran, but also on US production and on some of its friends, said Morningstar, who wanted to know whether there is a US policy toward Saudi oil production.

“Saudi Arabia is a very careful, creative, professional country when it comes to addressing the oil markets… Overall they have managed oil markets and their own production in a remarkable way,” said Hochstein.

“I think they are just being a lot more cautious and careful, as I would have expected them to” be, he added.

But Hochstein acknowledged that the US is worried about the effect of falling oil prices on countries like Iraq and Nigeria.

“Iraq is a real concern because this is the worst possible timing for Iraq. … This is the time they need revenues to continue the very difficult fight against [the Islamic State of Iraq and Syria] and maintain the stability of the country… and the same goes for Nigeria,” he said. Boko Haram militants have been waging deadly attacks across northeastern Nigeria where they are trying to carve out an Islamic state.

It is precisely because of the uncertainty over oil prices that the US has consistently encouraged countries to diversify their economies, create rainy day funds, change policy and have more transparency on the use of revenues, said Hochstein.

“Countries have to look at rainy day conditions when the sun is shining,” he said.

Hochstein provided an overview of what he described as a “moment of opportunity” in energy markets in the Americas and the Caribbean.

In the eastern Mediterranean, new energy discoveries can be used as “vehicle to increase cooperation, increase collaboration, to support stability, security and prosperity,” he said.

“It is an opportunity. It is a moment in time, but it doesn’t mean that it will necessarily happen. All the parties in that region will have to take some rational steps that will overcome some of their tendencies and old conflicts in order to make it happen,” he added.

Asia, particularly India and China, are the largest consumers of global energy. The Obama administration is not only focused on cutting emissions, but also promoting the use of more renewable forms of energy and creating an integrated market in Asia, said Hochstein.

While focused on all these opportunities, the Obama administration is also committed to ensuring enforcement of Iran oil sanctions, preventing ISIS from selling oil to finance its terrorist operations, and ensuring that new oil and gas discoveries in maritime areas that have not been delineated are not used as a source of confrontation, said Hochstein.