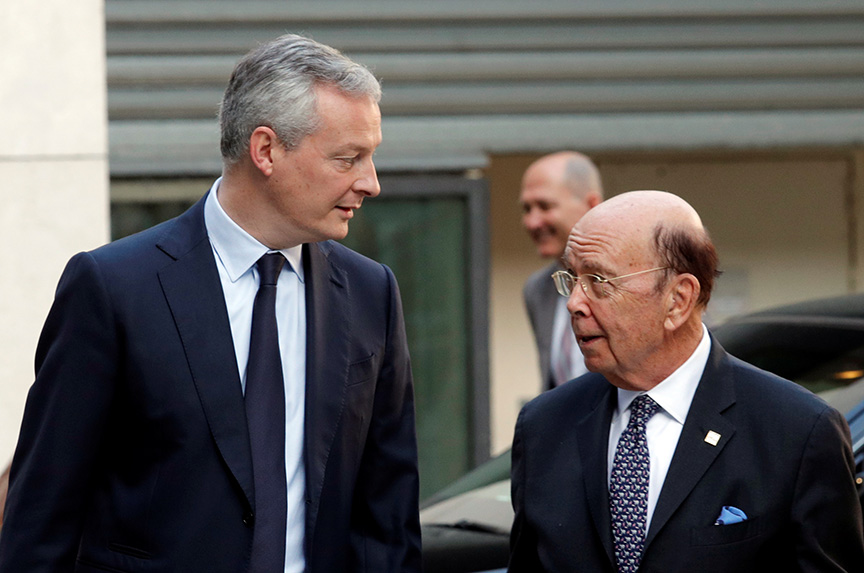 US President Donald J. Trump’s administration announced on May 31 that it will no longer exempt Canada, Mexico, and the European Union from previously announced tariffs on steel and aluminum imports. This means tariffs—25 percent on imports of steel and 10 percent on imports of aluminum—will go into effect at midnight on June 1. The decision will strain US ties with some of its closest allies and has already sparked retaliation.

The EU will target US products such as Levi’s jeans, bourbon, and Harley-Davidson motorcycles. Mexico on May 31 responded to the US decision with its own announcement of tariffs on imports from the US, including flat steel, pork products and fruit.

The Trump administration had used the threat of tariffs to get Canada and Mexico to accept its demands for rewriting the North American Free Trade Agreement (NAFTA) and as leverage in trade negotiations with European officials. Both the NAFTA talks and discussions with the Europeans have made little headway.

US Commerce Secretary Wilbur Ross, who is responsible for tariff negotiations with the EU, blamed the EU for a lack of progress in the talks. “China hasn’t used that [tariffs] as an excuse not to negotiate… It’s only the EU that is insisting we can’t negotiate if there are tariffs,” Ross said at the OECD meetings in Paris on May 30.

Ross’ position stands in stark contrast to that of the EU, articulated by European Commission President Jean-Claude Juncker, that the Union will “not negotiate with the sword of Damocles hanging over our heads.”

The United States separately reached agreements with other targets of the metal tariffs—Argentina, Australia, Brazil, and South Korea, which have agreed to limit their metals exports.

Atlantic Council analysts reacted to news that the United States has imposed tariffs on some of its closest allies. Here’s what they had to say:

“There will be an immediate assured response from the EU, which has carefully studied its options in this regard and will target its tariffs with some precision at the Republican base by the choice of products.

“This is the equivalent of a domestic tax increase as steel and aluminum are important production inputs for a wide range of goods such as cars and cans that will now become more expensive for the American consumer.

“The link to domestic security concerns is tenuous at best as the sanctions target key US allies.

“The tariffs play into China’s hands as they place at significant risk the US’ ability to work with these key allies on longstanding concerns regarding China’s trade practices, which include dumping and oversupply.

“The tariffs add to a growing list of geopolitical threats to the global economic growth environment. We expect growth to decelerate and come in under the International Monetary Fund forecast this year and next as negative surprises continue and hinder investment globally.”

“On a geostrategic level, this decision calls into question the future of traditional alliances. There will only be losers.

“The fact that the United States is using national security considerations as a legal justification to impose these tariffs on its allies will put into question the legitimacy of global trade rules, likely open a Pandora’s box, and allow other countries to misuse the same clause as a disguise for national economic considerations in the future.

“It also means that the United States no longer sees the EU as its traditional security ally—it just ruled the EU a threat to national security.

“The United States is abusing the rules-based system it once built to target the very same allies with which it built this system.

“The issue of tariffs will likely dominate the June 8 G-7 meeting, which will include Canada, France, Germany, Italy, Japan, the United Kingdom, and the United States.

“Potential tariffs on automobile imports will hurt the US automobile industry and would be a gross misuse of the ‘national security’ clause under Section 232 of the 1962 US Trade Expansion Act.”

Image: French Finance Minister Bruno Le Maire (left) and US Commerce Secretary Wilbur Ross arrived for a meeting at the Bercy Finance Ministry in Paris on May 31. US President Donald J. Trump’s administration on May 31 announced it would impose metal tariffs on the European Union, Canada, and Mexico. The Trump administration has justified its use of tariffs citing national security concerns. “We take the view that without a strong economy, you can’t have strong national security,” Ross said. (Reuters/Philippe Wojazer)