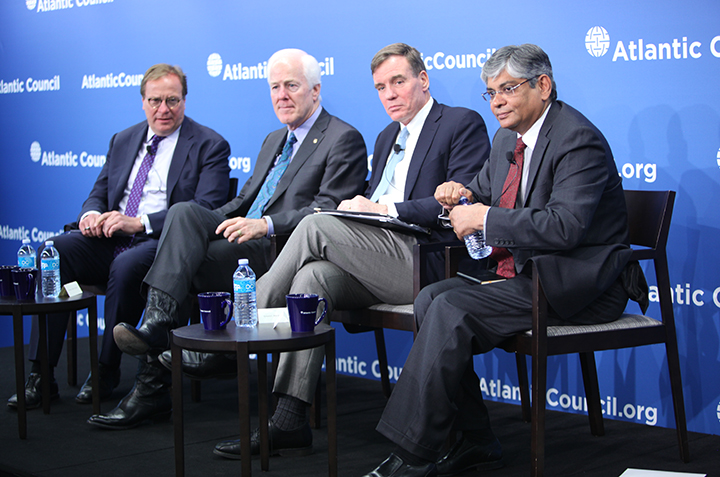 As the United States and India set out to realize their goal of elevating annual bilateral trade to $500 billion over the next decade, deeper defense cooperation will be key to energizing a trade relationship that has “plateaued,” two senior US Senators said at the Atlantic Council on April 25.

“One of the areas where I think there is great, great opportunity to increase this trade is in the defense realm,” said Sen. Mark Warner (D-VA). Noting that India is the second-largest buyer of US defense equipment, he added: “We need to increase that.”

Sen. John Cornyn (R-TX), who along with Warner co-chairs the Senate India Caucus, said the “defense industry can, and should, be a major piece” of the effort to expand the trade relationship for both economic and security reasons.

Warner and Cornyn spoke at the launch of the US-India Trade Initiative of the Atlantic Council’s South Asia Center. India’s Ambassador to the United States, Arun Singh, also spoke at the event. Following their remarks, Atlantic Council President and CEO, Frederick Kempe, moderated a panel with the three speakers.

Cornyn made the point that US-India trade had “plateaued” and trade between his home state of Texas and India had actually declined. “We should be doing more to make sure that we can jumpstart this important trade relationship and improve it in the future,” he said.

He suggested one way this can be done is by including India in existing trade structures such as the Asia Pacific Economic Cooperation (APEC) forum. India has expressed an interest in joining APEC. The White House welcomed this interest in a statement during US President Barack Obama’s visit to New Delhi in January of 2015. This week, Cornyn and Warner will introduce legislation in the Senate that would direct the State Department to develop a strategy to help India realize its goal to join APEC.

The US-India defense relationship has been marked by a recent uptick in meetings between defense officials on both sides. US Defense Secretary Ash Carter met his Indian counterpart, Manohar Parrikar, for the fourth time within a year when he visited India earlier in April. A joint statement following that meeting affirmed the importance of bilateral defense cooperation in the strategic partnership between the United States and India.

US-India defense ties have, in particular, expanded under the Defense Technology and Trade Initiative (DTTI) and Indian Prime Minister Narendra Modi’s “Make in India” initiative. This is reflected in the recent offer by Lockheed Martin and Boeing to manufacture F-16 and F/A-18 fighter jets in India.

Warner said that he understood India’s “appropriate desire” to build its own defense capacity and production facilities. Nevertheless, he noted, there are “enormous opportunities” for the United States and India to jointly partner—“not simply sell our equipment to India”—in areas like drones, advanced aircraft, and missile systems.

“We can have a win-win where India can build up its national capacity building on Prime Minister Modi’s ‘Make in India’ campaign, and we in America can leverage some of the intellectual capital assets that are in India,” he said. “This kind of joint collaboration and cooperation…is an area which offers great potential,” he added.

‘Bumps’ in the relationship

The US-India relationship has its share of challenges. One such challenge frequently cited by US officials and analysts is the fact that US firms have yet to benefit from a civilian nuclear deal the George W. Bush administration negotiated with India in 2008. The deal had become mired in contentious liability and insurance issues. Following a political agreement to address these concerns, Indian officials now say the ball is in the US companies’ court.

Another irritant is continuing US military support for Pakistan—a country with which India has fought three wars and from where terrorists attacked the Indian city of Mumbai in 2008. The Obama administration’s decision to supply F-16 fighter jets to Pakistan, over India’s objections, prompted an angry response from New Delhi in February.

Cornyn, who voted against a recent resolution from Sen. Rand Paul (R-KY) to block the sale of weapons to Pakistan, said it is important for the United States to have a relationship with that country. “I don’t think the United States is going to be asked to choose between [India and Pakistan], we need to be actively engaged in pursuit of our national interests with both,” he said. Warner voted for the resolution.

Warner acknowledged that there are other “bumps” in the US-India relationship. A key question for him was whether Modi will be able to convince the Indian Parliament to meet his ambitious agenda.

Another stumbling block is the Indian government’s caps on foreign direct investment, he added.

While some of these caps have been lifted—in insurance, for example—Warner said: “We think if we are going to have a full and robust trading relationship with India we need to continue to have our Indian partners lift the caps so that American and other outside investment can continue to flow into India without constraints in terms of caps on the amount on foreign ownership in key areas.”

US officials, eager to boost the economic relationship with India, have been prodding New Delhi to do more. On a visit to India earlier in April, Nisha Biswal, US Assistant Secretary of State for South and Central Asian Affairs, said US firms looking to invest in India need “transparency, predictability, and legal certainty.” The US Ambassador to India, Richard Verma, has described the absence of a Bilateral Investment Treaty (BIT) as an “impediment” to growing bilateral trade.

Negotiations on a BIT are moving in “spurts and starts,” said Warner while advising that a BIT should be high on the list of priorities for both countries. “Getting a BIT in place…will give the level of confidence that investors in India, and for that matter investors in the United States, will have to make sure that these investments across countries are protected,” he said.

With a growth rate of seven percent, India is the fastest-growing economy in the world; it expects an investment of $1 trillion in infrastructure over the next five years as well as greater defense spending; it is replete with opportunities for collaboration on digital technology and renewable energy; and is a hub of innovation and startups, said Singh.

Given this context, “and making allowance for the fact that the political economies of the two countries are different…and that there cannot be a cookie-cutter approach…I believe we are today at a moment where there is tremendous opportunity for new areas of trade and investment flows between India and the United States,” he added.

India has bipartisan support in Congress—a fact that has been reflected in recent Democratic and Republican administrations. That support is reciprocated in New Delhi. Atlantic Council Chairman Jon M. Huntsman, Jr., noted a “growing enthusiasm, desire, and keen willingness [in India] to engage deeper and deeper with the United States.”

Obama hosted then Indian Prime Minister Manmohan Singh for the first state dinner of his administration in November of 2009. Modi—who attended the Nuclear Security Summit in Washington earlier in April—is expected to visit Washington again in June. Cornyn said House Speaker Paul Ryan is favorably inclined to inviting Modi to address a joint session of Congress as a way to give not just the Prime Minister, but also India, a bigger platform.

“There are very few countries where there is this much of uniform good feeling in the United States Congress as there is towards India,” said Warner.