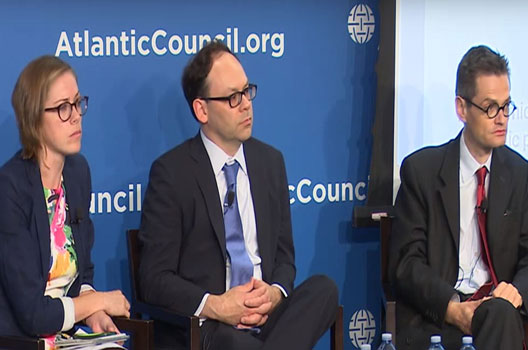 Amid global trends of isolationism and proposals from Donald Trump for US disengagement, an international survey conducted by Pew Research Center suggests that isolationist policies would be “unpopular” if enacted by the next US administration.

“If you look at our data… in different ways it’s clear that people are still looking for engagement with the United States. They want economic engagement, diplomatic engagement; they want the US to play a security role,” said Richard Wike, director of Global Attitudes Research at Pew, at the Atlantic Council in Washington on June 29.

“I don’t see any evidence in our data that people are looking for the US to pull back,” he said.

Wike spoke on the results of the survey for the United States’ international image at the Atlantic Council at an event hosted by the Brent Scowcroft Center for International Security. He was joined by David Rennie, Washington bureau chief and Lexington columnist for the Economist. Daniel Chiu, director of the Scowcroft Center’s Strategy Initiative, gave opening remarks while Molly O’Toole, reporter for Foreign Policy, moderated the panel discussion.

Wike’s findings come as the question of the United States’ foreign policy strategy is being hotly debated in the race for the White House. With the United Kingdom voting to leave the European Union on June 23; the United States facing “increasing distrust” from the Middle East, according to Wike; and the Obama administration experiencing Pakistani pushback following the US drone strike that killed Taliban leader Mullah Mansour, some have felt that US global engagement should be scaled back in the future.

At the same time, an open letter signed by US State Department officials has urged the Obama administration to carry out definitive military action in Syria, Eastern Europe has called for an increased NATO presence, and South Asian countries desire greater US assistance  in countering Chinese actions in the South China Sea. Others have taken these events as signals for the United States to remain involved on the global stage. According to Wike’s results, sustained US involvement in foreign affairs stands as the global opinion.

When survey participants were asked about the overall favorability of the United States, ratings were mostly high across Europe, Asia, and North America. Generally, if a country favors the United States, it will be less opposed to a more engaged US foreign policy, according to Wike.

This was tested in the immediate audience as well—assuming those in the room had a positive view of the United States, over eighty percent of the audience advocated for a US role that necessitates engagement:

Support for US involvement was reflected in Wike’s results. Particularly, US military action against the Islamic State of Syria and al-Sham (ISIS) has been very popular, despite significant criticism of the Obama administration’s Syria policy.

This is in stark contrast to the previous George W. Bush administration, whose foreign policy was widely criticized around the world due to the unpopularity of the Iraq war, said Wike.

“I think that the reason why… is that Europeans and many others around the world are very concerned about ISIS. I think that’s the reason why this time around we’re seeing people welcome the use of hard power in the Middle East by the United States,” said Wike.

“If President Trump happens, we’re in for a lot of trouble…the caricature of George W. Bush is fairly close to what Donald Trump tells his supporters he will be. He will be America first…he will not try nation building. He’s not interested in democracy. So everything that Europe thought they disliked about George Bush, Donald Trump is currently telling his supporters he will deliver,” said Rennie.

“Now some of that may be rhetoric, but I think that gives us a sort of glimpse into how bad it could be,” he added.

Rennie emphasized the need to look beyond the larger picture. Highlighting Italy, Hungary, and Greece, as well as the French far-right political party, the National Front, and the UK Independence Party, Wike noted that certain organizations with far-right leanings were more likely to approve of Trump and US disengagement. However, isolationist policy as a whole was overwhelmingly unpopular, he noted.

A closed off policy “is something that really doesn’t have a lot of appeal to many parts of the world in terms of if that were it to be the US’ approach to the world. We see lots of evidence that, at least among our allies and many parts of the world, people want US engagement; they want a closer relationship with the US,” said Wike.

“A closed America, in many countries at least, is not something people are looking for,” he added.