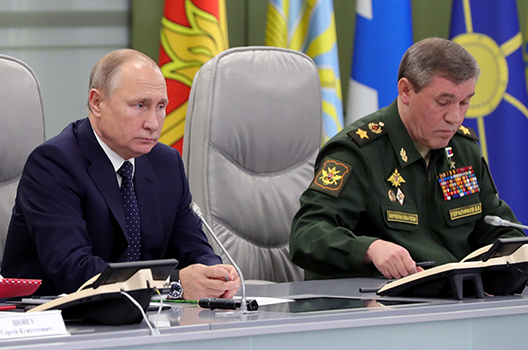 The US decision to suspend participation in a decades-old nuclear arms control treaty with Russia has raised the probability of a US-Russian arms race, according to Alexander Vershbow, a distinguished fellow in the Atlantic Council’s Scowcroft Center for Strategy and Security and a former US ambassador to Russia.

“Although the US withdrawal will not take effect for another six months, today marks the effective end of the INF Treaty, the only nuclear arms agreement to ban an entire class of missiles,” Vershbow said. “The loss of the treaty creates a real possibility of an unpredictable and unconstrained US-Russian arms race in Europe and, potentially, in Northeast Asia as well.”

US Secretary of State Mike Pompeo announced the US decision on February 1 claiming that Russia was,  despite a sixty-day deadline set by the Trump administration in December for Moscow to come back into compliance with the Intermediate-Range Nuclear Forces Treaty (INF), continuing to violate its treaty obligations.

“To this day, Russia remains in material breach of its treaty obligations,” Pompeo said at the State Department in Washington. Pompeo said the United States will, therefore, be suspending its involvement in the agreement effective February 2, with full withdrawal possible in six months. “When an agreement is so brazenly disregarded and our security so threatened we must respond,” Pompeo said.

Russia has long violated the Intermediate-Range Nuclear Forces Treaty, developing and fielding a prohibited missile system that threatens our allies and troops abroad. Tomorrow, the U.S. will suspend its obligations and begin the process of withdrawing from the treaty.

In January 2014, the New York Times reported that US officials had proof Moscow was testing a new ground-based missile that was in the United States’ view in clear breach of INF provisions. Pompeo said the United States had raised its objections to Russia’s missile activity “more than thirty times” with Moscow but has been met with no discernible action by Russia to reverse its activities. In July 2014, US President Barack Obama sent a direct letter to Russian President Vladimir Putin stating that Moscow had broken its treaty obligations and insisting that Moscow abandon its new missile program.

On October 20, 2018, US President Donald J. Trump announced that the United States would look to withdraw from the INF Treaty, saying that since Russia is not following the agreement, the United States will “have to develop those weapons,” to meet any threat from Russia.

“Russia bears primary responsibility through its development and deployment of a non-compliant  ground-launched cruise missile, the 9M729,” said Vershbow. “Its belated attempts at transparency were too little too late:  publicly displaying the purported canister of the 9M729, without showing the missile and its internal workings, did nothing to refute the evidence obtained by the United States that the missile has been test-flown to a range well beyond the INF limit of 500 kilometers.”

Vershbow said that a diplomatic solution during the six-month withdrawal period seems unlikely, as “the Russians have rejected the entirely legitimate US demand that the 9M729 be dismantled and the program shut down.”

US President Ronald Reagan and Soviet leader Mikhail Gorbachev  signed the INF Treaty in December 1987 in order to ease the buildup of nuclear forces in Europe. The agreement, which now includes former Soviet states, bans nuclear and conventional missiles with ranges of 500 to 5,500 kilometers. The treaty resulted in the dismantling of almost 2,700 missiles and their launching systems in the early 1990s.

“The INF Treaty has enhanced the security of Europe for decades and the United States would have preferred for it to remain in place,” said Matthew Kroenig, deputy director of the Atlantic Council’s Scowcroft Center for Strategy and Security. “Unfortunately, Russia has been cheating on the treaty for a decade and it does not make sense for the United States to be unilaterally constrained as Russia builds and deploys missiles that are currently threatening US allies and forces in Europe.”

It makes no sense, Pompeo argued, for the United States to be “restricted by the treaty while Russia shamelessly violates it.” In an official statement on February 1, Trump argued that the United States “cannot be the only country in the world unilaterally bound by this treaty.”

The United States has adhered to the INF Treaty for more than 30 years, but we will not remain constrained by its terms unless Russia comes into verifiable and enforceable compliance.

Vershbow, who is also a former NATO deputy secretary general, said: “The United States and its NATO allies, who are directly threatened by the illegal Russian INF missile, have remained remarkably united in recent months as the INF drama entered the endgame. It is essential that they remain united in assessing together the options for countering the Russian violation, as they did when the original INF dual-track decision was taken back in 1979.”

Pompeo gave “special thanks to our NATO allies, who stood with us in our mission to uphold the rule of law and protect our people.”

The solidarity NATO allies have shown, Pompeo said, “reflects the historic strength and unity of the NATO alliance. Their support is good for our shared security, it is good for transatlantic unity, and it’s good for international peace and security. President Trump is grateful for all you have done.”

NATO Secretary General Jens Stoltenberg tweeted his full support for the United States’ decision on February 1, while an official NATO statement said that “Russia will bear sole responsibility for the end of the Treaty.”

Russia is in material breach of the #INFTreaty & must use next 6 months to return to full & verifiable compliance or bear sole responsibility for its demise. #NATO fully supports the US suspension & notification of withdrawal from the Treaty: https://t.co/VOhUB0HoAd pic.twitter.com/28Rwicqr8o

Vershbow suggested that the United States and its allies should “focus, first and foremost, on conventional solutions that can negate the advantage the Russians hope to gain by deploying the 9M729 along NATO’s Eastern flank.”

“The United States and its allies have sufficient nuclear capabilities to deter potential nuclear variants of the 9M729, particularly with the improvements envisaged in the administration’s Nuclear Posture Review (low-yield warheads and new nuclear-armed, sea-launched cruise missiles),” he said.

“Arms control may still have a role to play in preventing an action-reaction cycle, but the focus should shift toward extending the New START Treaty before it expires in 2021 and possibly broadening it to include limits on non-strategic systems and emerging technologies such as hypersonic cruise missiles,” Vershbow said, adding: “With the demise of the INF Treaty, New START will be the only remaining constraint on Russia’s formidable and growing nuclear capabilities.”

The end of US INF commitments also has implications for US activity in Asia, as the United States is now free to “build and deploy INF-range, conventionally-armed missiles in Asia to balance against China, which possesses hundreds of these missiles,” Kroenig explained.

For Vershbow, the US decision has special meaning. “The INF dual-track decision was one of the first issues I worked on at the start of my Foreign Service career in 1977,” he explained. “It is disappointing that Russia has chosen to undermine the INF Treaty and so many other pillars of the security architecture that ended the Cold War at the end of the 20th century.”