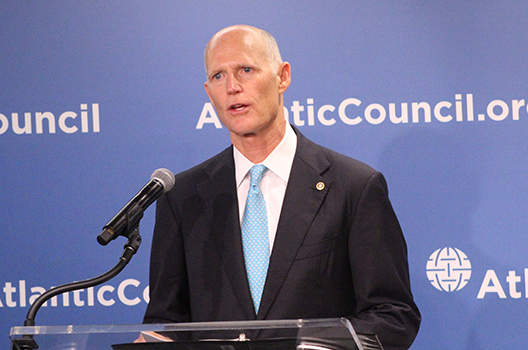 Maduro has led Venezuela since his election as president in 2013, when he took over from Hugo Chavez. On his watch Venezuela has become mired in an economic and humanitarian crisis marked by widespread unemployment, food and medicine shortages, and hundreds of thousands of Venezuelans have left country. After Maduro was inaugurated for a second term on January 10, following elections deemed fraudulent by many international observers, National Assembly President Juan Guaidó was selected as interim president by the National Assembly and recognized by the United States and more than fifty other countries. Guaidó attempted to rally support from the Venezuelan military to depose Maduro in his “Operation Freedom” on April 30, but has been so far unable to force Maduro to step aside.

The situation in Venezuela “is a crisis that threatens the safety and security of our allies in Latin America and eventually the United States of America,” Scott, a member of the US Senate Armed Services Committee, said at the Atlantic Council in Washington. Describing the conditions facing Venezuelans, he explained that “there is starvation. There is hunger and if you listen to the families, there is not a lot of laughter. There is a lot of pain.”

Noting that children are starving to death, the senator said: “there is one person that is primarily responsible for it and his name is Nicolás Maduro.”

Russian support has been critical to Maduro retaining power. In December 2018, two nuclear-capable Russian bombers landed in Venezuela as part of an exercise, and then two Russian military planes dropped off 100 Russian troops in the country on March 24. Russia has long been a considerable investor in the Venezuelan oil sector and helped Venezuela develop a digital currency—the “Petro”—to help avoid US sanctions on oil sales.

“Russia has to know that their continued support of the thug killing his own citizens and denying basic human rights calls into question their position on the world stage,” Scott said. “If Russia wants to be a serious geopolitical player they need to withdraw from Venezuela. The quicker the better,” he added.

Scott maintained that the presence of Russian troops and aircraft in Venezuela is intended to “intimidate the United States and other countries in the region to make sure we don’t do anything” to harm Maduro and also to help Moscow “gain a foothold in the Western Hemisphere.”

Putin’s actions in the region are particularly dangerous for the United States, Scott argued. “The presence of Russia, along with Cuba, China, Iran, Hezbollah, as well as other international terrorist organizations, in Venezuela presents a clear and present danger to the national security interests of the United States and all of our allies in Latin America,” he said. “Not since the Cuban Missile Crisis has Russia taken such aggressive steps to expand their influence in the region.”

“The driving principle of Russia’s actions” in Venezuela “is fundamentally to marginalize if not eradicate US power internationally,” Paula Dobriansky, former undersecretary of state for global affairs and an Atlantic Council board director said.

John Herbst, director of the Atlantic Council’s Eurasia Center and a former US ambassador to Ukraine agreed, saying that Putin probably “feels that he persuaded Washington to step back” from intervening militarily to oust Maduro when Russia sent in troops and planes.

According to Jason Marczak, director of the Atlantic Council’s Adrienne Arsht Latin America Center, for Putin Venezuela is “a low-cost opportunity to plant the flag, foster instability near the United States, and have leverage over key energy resources at the same time.”

Domestic concerns are also a main motivator for Putin’s interest in Venezuela, Evelyn Farkas, a resident senior fellow at the German Marshall Fund and former deputy assistant secretary of defense for Russia, Ukraine, and Eurasia said. “For Putin it is all about regime survival… he is afraid that someday that regime change… will come to roost in Moscow.”

Konstantin Eggert, a columnist for Deutsche Welle added that Putin’s domestic and international image can be burnished by getting involved in places like Venezuela, as he can become “the go-to man” for other autocrats who are threatened by internal dissension.

Despite Putin’s interest in keeping Maduro afloat, there are now several signs that Russia’s support is waning. Earlier in June, Russia began withdrawing many of the military advisers from the country, while also beginning to roll back its economic investment in the country.

Atlantic Council Nonresident Senior Fellow Mark Simakovsky noted that “you have not seen any significant [new] arms deals between the two sides,” while Russian oil company Rosneft “has not upped significantly its stake in Venezuela.”

Fransisco Monaldi, director of the Latin America Initiative at the Baker Institute for Public Policy, explained that Moscow may be hesitant to invest more because it has benefitted from the collapse of the Venezuelan oil sector, which has allowed Russia to avoid cutting oil production to prevent price drops.

Scott said reports of Russian withdrawals are “welcome news,” but argued that “every day we have to keep the pressure on.” Scott was confident that “If Russia stops propping up the regime in Caracas, I believe the dominoes will fall and the people of Venezuela will be free from this evil and tyranny of Maduro.”

The senator argued that the United States must do all it can to stop the suffering in Venezuela and “prevent a Syria in our hemisphere.” This means, he added, that “all options, including the use of American military assets, must remain on the table.”

“The United States and its allies need to do everything we can to get Maduro to step aside,” Scott maintained. “We cannot let this evil continue under our watch.”