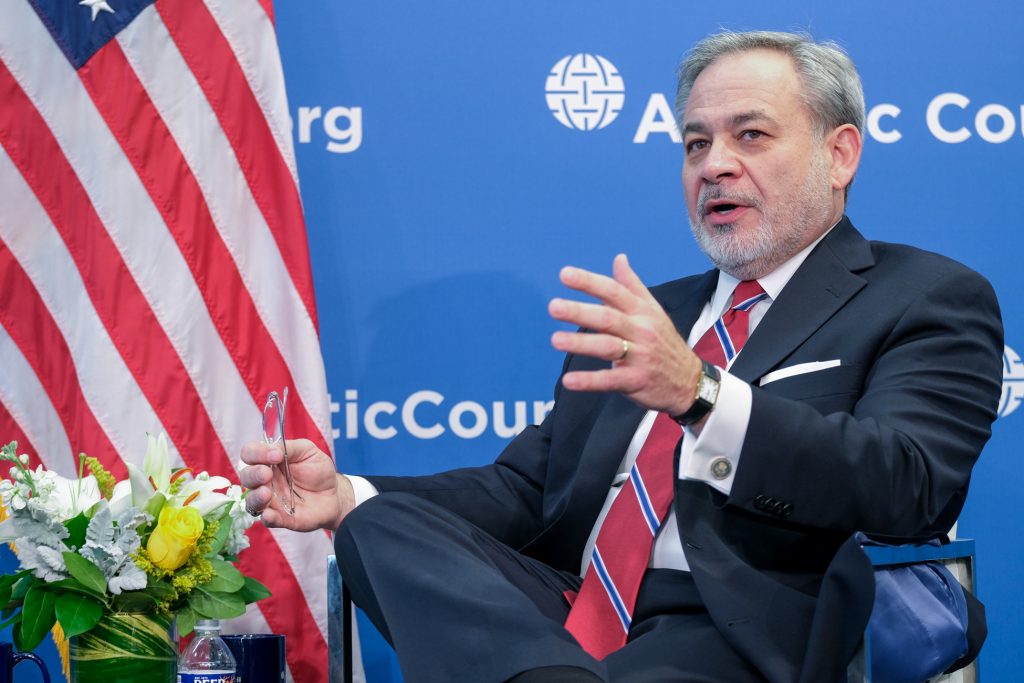 The United States’ transformation into a net exporter of energy “has revolutionized our foreign policy, and it frees us to pursue options that we have not had at least in my lifetime,” US Secretary of Energy Dan Brouillette said on February 7.

Speaking at the Atlantic Council, Brouillette argued that “with US energy production now at record levels, the world is no longer subject to the will of countries who seek to do us harm,” such as Russia and Iran, and allows the United States to use energy cooperation and investment as a key tool to advance its foreign policy aims. “Energy remains a critical aspect and a critical component of our national security,” Atlantic Council Executive Chairman Emeritus General James L. Jones Jr. said while introducing Brouillette, adding that “the United States’ role as an energy and energy technology exporter has provided a deeper toolbox of policy options to meet our foreign policy goals.”

Brouillette argued that the boom of US energy production followed “a long struggle between innovation and regulation,” but now “innovation is winning the day,” as the Trump administration has “made innovation the cornerstone of our energy policy.” Brouillette credited new technology and looser regulations with helping the United States become not only “the world’s largest producer of both oil and natural gas,” but also “the world’s second largest generator of wind and solar power.”

The energy secretary added that the United States is also focused on “reviving two of the world’s most reliable, 24/7 generators of electricity—nuclear [energy] and coal.” Brouillette announced that the Trump administration would be releasing $64 million of research and development funds into the Coal FIRST initiative, which will “help us produce more coal-based power more efficiently, and transform it into a near-zero-emissions energy source for not only our country, but the rest of the world.”

Brouillette noted the concern of continuing to rely on carbon-intensive coal for electricity generation amidst global efforts to cut carbon emissions but argued that this effort is intended to find ways to make coal electric power generation cleaner and more efficient. He stressed that developing countries continue to rely on coal and “if we are going to see that product used to generate electricity, we want it to be used as cleanly as possible.” He explained that research would focus on making coal plants smaller and more efficient, as well as integrating more carbon capture and storage technology. Brouillette added the Trump administration also announced $125.5 million on February 5 for solar technology research.

Coal is just one example of how increased US energy production opens up new opportunities for the United States to meet its foreign policy goals abroad. He explained that the Coal FIRST initiative will also help explore ways to export cleaner coal technologies to markets such as Asia and Africa in order to help them limit their carbon emissions and diversify their energy sectors. Boosting all of the United States’ energy sectors “strengthens our energy security [and] improves our economic security,” Brouillette argued. “Costs have fallen, jobs have risen, and opportunity flourishes. It bolsters our national security, by freeing us and our partners from unstable and often unfriendly foreign suppliers.”

The impact of the United States’ new energy resources is already being felt in Europe. Brouillette cited EU figures that “many European countries remain dependent on Russian gas to meet more than 75 percent of their annual gas imports.” This dependence is dangerous, he argued “given Russia’s use of energy to bend other nations to its will,” as Moscow has attempted several times with its neighbor Ukraine. “Those nations must diversify,” Brouillette said, “[and] thankfully, I think the United States is offering a compelling answer.” He reported that US exports of liquified natural gas (LNG) have “risen by nearly 600 percent,” but maintained that more needs to be done. He stressed that “roughly 40 percent of the EU’s LNG regasification capacity cannot be accessed by their neighboring member states.”

The United States supports efforts to help Europe rectify these shortfalls through both the Partnership on Transatlantic Energy Cooperation (PTEC) to help grow infrastructure for US LNG exports to Europe, as well as the Three Seas Initiative to help strengthen intra-European gas transport infrastructure. “Through PTEC and the Three Seas Initiative, the United States will mobilize technical expertise…and help Europe create a better environment to attract what we feel is the investment they need to build new infrastructure,” Brouillette said. “America’s incredible energy success story means the transformation of both sides of the Atlantic—and indeed the world—in truly wonderful ways.”

The energy secretary also highlighted the effect of the energy transformation on US relations with Latin America. Brouillette reported that the Trump administration has “accepted the challenge of developing a Western Hemisphere Energy Strategy, which was launched right here with the Atlantic Council, to give us a modern blueprint for supporting energy projects all across the Americas.” The strategy is already bearing fruit, he explained, as he chaired the first meeting of the US-Brazil Energy Forum in Rio de Janeiro on February 3. Launched by US President Donald J. Trump and Brazilian President Jair Bolsonaro in March 2019, the Forum “exemplifies the bold new frontier for our own hemisphere’s integration, its independence, and ultimately its prosperity,” according to Brouillette. “From oil and gas to civil nuclear energy to power and energy efficiency, the dialogue we had was both extensive and illuminating.”

Brouillette said the United States remains committed to engaging with the entire Western Hemisphere on energy cooperation to help further prosperity. “From the pre-salt drilling in Brazil to unconventional gas projects in Argentina, to the potential deployment of renewables in Colombia and Chile, the Americas present incredible opportunities for nations to work together and to develop energy resources,” he said. “We can work together to achieve energy security and work together to foster economic growth.”

For the United States, energy can provide another critical tool to help further the United States’ vision of a free and peaceful world. “We believe that in order to have a more secure and a more prosperous world, we must encourage more free, transparent, rules-based markets within countries, and to replicate these fundamental values around the globe to enhance commerce among these countries,” Brouillette said. As the United States enters a new age of energy abundance, these new resources can drive US action to bring about that new world.

What will Brexit mean for energy markets?

“Initial indications are that post-Brexit Britain will pay less attention to issues concerning climate change despite the fact that it is to hold COP 26 in Glasgow in November,” John Roberts says.

Image: US Secretary of Energy Dan Brouillette speaks at the Atlantic Council on February 7, 2020.