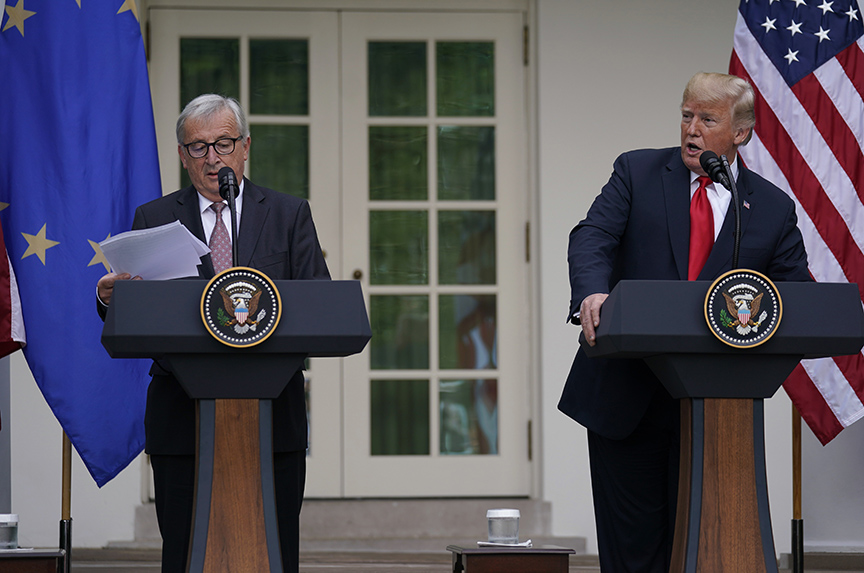 US President Donald J. Trump and European Commission President Jean-Claude Juncker attempted to tamp down trade tensions between the United States and the European Union (EU) in their meeting at the White House on July 25. Juncker pledged that the EU would seek to import more US soybeans, buy more US liquified natural gas (LNG), and work toward an agreement on zero tariffs for industrial products in exchange for a promise from Trump to back off his threat to increase tariffs on European-made cars.

Speaking in the White House Rose Garden, Trump announced that both leaders had agreed to start a serious trade negotiation, with the hope to “launch a new phase in the relationship between the United States and the European Union.” In addition to the deal to avoid the car tariffs, Trump said that the United States and the EU would work closely in the future to achieve “zero tariffs, zero non-tariff barriers, and zero subsidies on non-auto industrial goods.”

Importantly, however, Trump did not announce the cancellation of US aluminum and steel tariffs that began the trade dispute in March. He said that Europe and the United States “would resolve the steel and aluminum tariff situation and the [European] retaliatory measures,” but offered no details on how this would be achieved. He did promise that there would be no new tariffs, as long as no side “terminates the negotiations.”

Bart Oosterveld and Marie Kasperek of the Atlantic Council’s Global Business and Economics Program were cautious about the outcome of the July 25 meeting. Although the promise of a conditional reprieve from additional tariffs is good, the “threat of tariffs is still intact,” according to Oosterveld, who is the director of the Global Business and Economics Program. “The avoidance of disaster is not a full-blown success,” he added.

The meeting produced what Kasperek, an associate director in the Global Business and Economics Program, called a “semi-truce,” where the leaders walked back from some threats (car tariffs and potential European retaliation) but did not make clear how they would address the existing steel and aluminum tariffs that are already in place.  In addition, the new negotiations announced will, no doubt, be long and complicated, she added.

Barbara C. Matthews, a nonresident senior fellow with the Global Business and Economics Program, noted that Trump and Juncker’s statement indicated trade in services as a potential avenue through which to dial down trade tensions, something Atlantic Council experts argued for in the run-up to the meeting. According to Matthews, “the transatlantic relationship works best when we talk with each other, so this joint statement should be welcomed as an excellent first step toward a more constructive set of trade discussions.”

While Trump said earlier on July 25 that he wanted to negotiate a “fair trade deal” with the EU, relations are still far from where they were before Trump’s election in 2016, when the United States and Europe failed to enact the proposed Transatlantic Trade and Investment Partnership (TTIP) free trade agreement. The aluminum and steel tariffs Trump enacted will remain a barrier to any serious discussions of a free trade deal, according to Kasperek, because the Europeans will not “negotiate with a gun pointed to the head.”

“The joint statement issued lays out an extremely ambitious agenda that talks about eliminating all non-tariff barriers, for example, and tackling different standards, both have which have long stymied transatlantic negotiators,” said Earl Anthony Wayne, who served as US ambassador to Mexico from 2011 to 2015 and is now a nonresident senior fellow with the Global Business and Economics Program.

Even if negotiations begin, Kasperek noted, they will be fraught with the same disagreements that torpedoed TTIP, especially among the European public. Trump’s emphasis on not only tariffs, but also barriers and subsidies, will send up red flags in many European countries. To the extent the US administration is looking for “quick wins,” Kasperek argued, the multi-year effort required to make serious progress will bring a quick dose of reality.

At the time of writing, it was unclear what “concessions” Trump gained from Juncker in exchange for dropping the threat of car tariffs. The joint press statement released after the meeting alluded to “working towards” lowering barriers and increasing trade on soybeans, industrial goods, and LNG, but did not list specific measures agreed.

The Atlantic Council experts also noted the importance of Trump’s stated desire to reform the World Trade Organization (WTO). The joint statement declared both partners would “work closely together with like-minded partners to reform the WTO and to address unfair trading practices, including intellectual property theft, forced technology transfer, industrial subsidies, distortions created by state-owned enterprises, and overcapacity.” Trump’s willingness to sign up to working with the multilateral organization was notable and provided a clear signal to China that the United States and Europe are serious about addressing Beijing’s aggressive trade tactics.

The promise from Europe to import more LNG from the United States will also give Trump a potential “win,” as he can “now say he got the Germans to buy [American] LNG,” Oosterveld said. After lambasting the Germans for relying on Russia gas during the July 12 NATO Summit in Brussels, Trump can point to this as a tangible success of his aggressive style of diplomacy.  However, once again, it is not clear how the EU leadership can get its member states to buy more from the United States, or how quickly they can show progress.

Trump announce that it was “a very big day for free and fair trade,” but his meeting with Juncker is at best the start of a longer, difficult negotiation. “Having worked on US-EU economic relations for some fifteen years, I know how complicated it will be to take the agreements announced to concrete, practical results,” Wayne said. “This is a tremendously worthwhile effort and I applaud the newly blessed work agenda, but it will take time, intense negotiations and patience to succeed,” he added.

Without quick engagement and signs of progress, trade conflict between the world’s two largest economies could return soon.