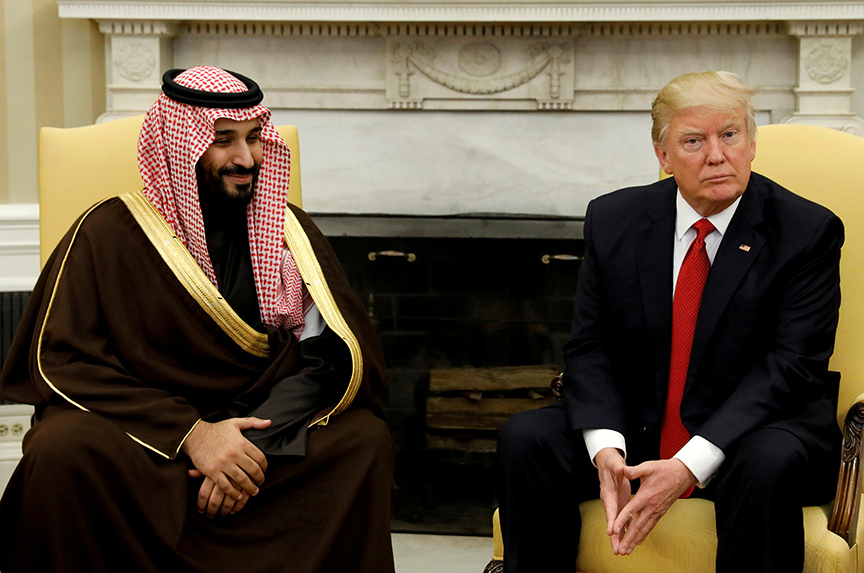 Saudi Crown Prince Mohammed bin Salman and US President Donald J. Trump, pictured here in the Oval Office of the White House on March 14, 2017, will meet again in Washington on March 20. (Reuters/Kevin Lamarque)

Saudi Crown Prince Mohammed bin Salman’s visit to the United States has energized the commentariat in Washington. Rarely have I seen more Middle East experts opining excitedly on the personality of and prospects for an Arab leader, on the significant change he has already brought to Saudi Arabia, and on the need to support his efforts to transform his kingdom economically and socially.  And, indeed, this young dynamic leader has taken long-overdue steps—allowing women to drive, reining in the religious police, formulating a vision for economic reform. Perhaps most refreshingly, he has acknowledged that it is OK, and even important, for Saudi citizens to have fun in public—opening movie houses and amusement parks as a start.  (A glass of wine with dinner is not in the cards, however.)

In a region known for its leaders who have been in power much too long, the Saudi crown prince is a breath of fresh air. Given the exuberance and high expectations, perhaps three quick cautionary notes are in order.

First, do not expect US-Saudi relations to suddenly shift from a largely transactional nature to some sort of more durable strategic relationship. On the plus side, the Saudis share the US interest in countering Iran and have cooperated in eliminating some Sunni terror threats. But some, if not many, Americans, including Islamophobes inside or close to the Trump administration, cling to suspicions about Saudi support for radical insular interpretations of Islam and will not be convinced by evidence that the young prince has taken steps to reduce such support. And many Americans will shake their heads in disbelief in the face of jailing of Saudis who dare to offer some criticism (not even rising to the level of dissent) about policies near and dear to the crown prince.

Meanwhile, one of the traditional pillars of the US-Saudi bargain—keeping oil prices low—no longer resonates. US companies fracking in the Permian Basin want prices to climb as high as they will go.

Second, the crown prince’s pitch for more foreign investment in Saudi Arabia is unlikely to gain much immediate traction, especially among those who have tried to do business there. Dave Eggers’ 2012 novel “A Hologram for the King” remains one of the best descriptions of an American businessperson’s frustration navigating the opaque corridors of procurement power in the kingdom. No Saudi leader can wave a magic wand and create a business climate that is transparent, agile, and based on rule of law.

In this regard, it will be interesting to hear the crown prince’s rationale for locking up and shaking down hundreds of businessmen. His defenders claim that this was the only viable method of recovering ill-gotten gains, or it was necessary to send a message about corruption. Maybe that is true in the Saudi context, but if major Saudi business magnates can be extorted at will, how many American executives are going to clamor for an opportunity to expand operations in Jeddah? Princely assurances will be inadequate—a system of rules and institutions needs to be installed and respected.  And some curious Saudis. as well as outsiders, might even wonder about the sources of Mohammed bin Salman’s own vast fortune.

Third, while it is important for Saudi Arabia to take a leadership role on the international stage, do not expect this inexperienced crown prince to offer any clear vision of a stable, let alone peaceful, Middle East. And do not expect consistent follow through on Saudi foreign and security policy ventures.

There is no justification for continued Saudi toleration of the humanitarian nightmare in Yemen. The Saudi intervention has made things worse there and seems to have contributed to the determination of Houthi fighters. Summoning Lebanese Prime Minister Saad Hariri to Riyadh in November of 2017 and forcing him to resign was, at a minimum, an embarrassing piece of foreign policy theater.

Saudi support for Egyptian President Abdel Fattah el-Sisi has not resulted in any visible economic improvements in Egypt, while Egyptian ability to project military force in the region in support of a Saudi anti-Iran strategy is negligible.

The Saudis have largely abandoned their earlier efforts to play a leadership role in ending the war in Syria. And the long-held American hope that the Gulf Cooperation Council (GCC) would form a unified front against Iran has been shattered, partly by fear among the smaller GCC states that Riyadh’s new leaders are intolerant of any sort of nuanced view of Iran, much less any effort to engage Iran in some sort of constructive dialogue.

Saudi leaders have never been very good at or very interested in communicating with the rest of the world. So it is great to see the Saudi heir-apparent out in public explaining his country and his plans for it.  Like other countries in the throes of major transformation, much can change in a society while much stays the same.  Finding ways to support positive change in Saudi Arabia, while not offering unquestioning support, should be a major objective of US policy in the Middle East.

Richard LeBaron is a nonresident senior fellow at the Atlantic Council. He served as the US ambassador to Kuwait from 2004 to 2007 and deputy chief of mission at the US Embassy in Tel Aviv from September 2001 to July 2004. Follow him on Twitter @RBLeBaron.