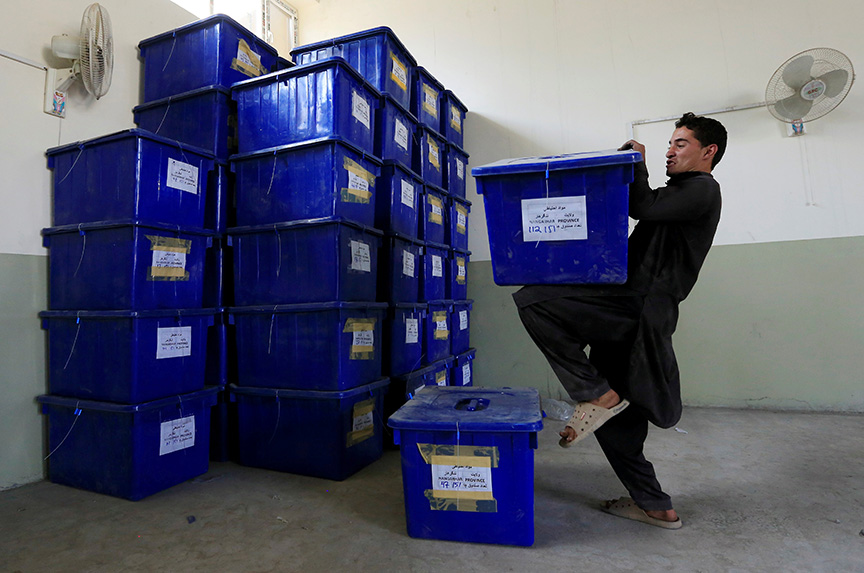 An Afghan election commission worker prepared ballot boxes and election material to send to polling stations at a warehouse in Jalalabad, Afghanistan, on October 19. (Reuters/Parwiz)

Afghans will vote in parliamentary elections on October 20 amid the familiar threat of violence.

The fragile security situation in Afghanistan was underscored on October 18 when Gen. Austin Miller, the top US military commander in Afghanistan, escaped unharmed in an attack by a Taliban gunman in Kandahar. Lt. Gen. Abdul Raziq, Kandahar’s police commander, and Abdul Momin, the provincial intelligence chief, were killed in the attack. The Afghan government has postponed the vote in Kandahar province by a week.

In the rest of Afghanistan, voters will head to the polls on October 20 to elect candidates to the lower house of parliament. The election is three years overdue. Around 2,500 candidates are standing for 250 seats.

Holding the election is “an important measure of progress that underscores how far Afghanistan’s nascent democracy has come,” said Javid Ahmad, a nonresident fellow with the Atlantic Council’s South Asia Center.

“The United States is merely supporting a democratic process, where the Afghan people are in the lead in deciding their own future through ballots instead of bullets,” he added.

Presidential elections are scheduled for the spring of 2019.

“There is clear desire for democratic expression in Afghanistan,” said James B. Cunningham, a nonresident senior fellow with the Atlantic Council’s South Asia Center who served as the US ambassador to Afghanistan from 2012 until 2014.

Political parties are not allowed by law to contest in the election. “It’s individuals,” explained Ahmed. “Even those who are affiliated with certain parties are required by law to run as independent candidates.”

Besides Kandahar, the vote has been delayed in Ghazni province following disputes over ethnic representation and fears of violence. “There are also at least thirty districts (out of 407) that fall under Taliban’s control, where elections are unlikely to be held,” said Ahmed.

The Taliban has steadily extended control across Afghanistan.

A recent report from the Special Inspector General for Afghanistan Reconstruction (SIGAR) found that as of August, 13 percent of the 407 districts in Afghanistan were under Taliban control or influence, compared with 11 percent in February.

The Taliban in a statement described the upcoming election as “a foreign plot to prolong occupation.”

The recent surge in violence and the Taliban’s calls for people to boycott the vote means security is a major concern.

Ahmed said that the Taliban’s opposition to the election stems from the fact that the militants don’t believe in a democratic process and people’s will. “They’re also opposed to the process because it would further alienate them from the people,” he added.

The Taliban have killed at least ten candidates besides scores of police officers and Afghan soldiers. The violence has had a negative impact on Afghans’ sense of security. A recent poll found only 13 percent of respondents felt safe, down from 36 percent in 2016.

The Afghan government has deployed more than 50,000 troops to protect the voting booths. “This would counter likely election-day violence, but it also doesn’t mean the vote will be entirely violence-free,” said Ahmed.

Despite this violent backdrop, US President Donald J. Trump and Afghan President Ashraf Ghani have been determined to explore the possibility of jumpstarting peace talks with the Taliban.

Earlier this year, the White House ordered US diplomats to engage directly with the Taliban to start up peace negotiations. US Secretary of State Mike Pompeo has appointed Zalmay Khalilzad to lead this effort. Khalilzad met Taliban representatives in Qatar earlier in October.

The outcome of the October 20 election could be crucial to the fate of this effort to make peace, said Ahmed. A new parliament, “especially if it includes more members from the younger generation, could possibly increase the pressure on the Taliban to engage in talks rather than violence,” he said.

A fairly large number of women are also running for seats in parliament, Cunningham noted.

“How many of them get elected can change things,” he said.