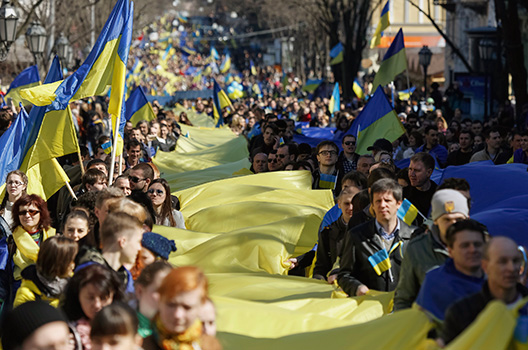 One year after Russia annexed Crimea from Ukraine in a brazen act that violated international treaties and rewrote Europe’s borders for the first time since World War II, Western governments and the media have largely forgotten the peninsula’s plight.

In Russia, however, that land grab is far from forgotten. Crimea annexation day will be celebrated with much pomp, parades, and the recent release of a new Russian documentary, Crimea: The Way Home. In the film, Russian President Vladimir Putin reveals that he ordered the annexation of Crimea and that this plan was hatched in a late-night meeting in February after then-Ukrainian President Viktor Yanukovych fled Kyiv and took refuge in Russia. Taking credit for the swift and relatively bloodless land grab, Putin says he was ready to put Russia’s nuclear arsenal on alert in case the situation escalated because Crimea was simply that important to Russia’s President. And it’s easy to see why: the annexation helped drive Putin’s popularity to its highest levels (according to latest polls, Putin’s approval ratings are at 86 percent) and ushered in a new wave of Russian nationalism that has made Russia’s economic woes easier to explain to the Russian population. For Putin, the annexation of Crimea has provided a windfall.

In between the West’s neglect and Russia’s reverence is Crimea itself. Russian occupation of the peninsula brought more than Russian passports to its residents; it brought a repressive new regime that stifles independent voices, discriminates against ethnic minorities, harasses Ukrainian speakers, and selectively enforces the law.

Crimeans today have little access to outside news sources, and Western audiences know very little of the many human rights violations that have now become a regular part of daily life on the peninsula. An Atlantic Council and Freedom House report, Human Rights Abuses in Russian-Occupied Crimea, chronicles in stark detail the intimidation techniques used by the Russian authorities: activists and journalists are made to “disappear”; members of the indigenous Crimean Tatar community are prevented from exercising civic rights of peaceful assembly; and all residents, regardless of ethnicity or linguistic preference, are vulnerable to harassment and can have their property seized. This shows the Kremlin’s complete disregard for the very people it claimed to protect when it annexed Crimea on March 18, 2014: Russians. Many Crimeans remain apathetic about their future as Russian citizens. Like most people around the world, they simply wish to have a sense of security—something that the Kremlin promised but has yet to provide.

The international community has turned its attention to Ukraine’s east, but Crimea should not and cannot be forgotten. Russia must still be held accountable for breaking the Budapest accord in which it agreed to secure Ukraine’s independence, sovereignty, and borders. In response to that accord, Ukraine gave up its nuclear arsenal, becoming the only country in the world to do so—a decision for which it has now paid dearly. It is not too late for Western European and US leaders to take a strong, united stance on Crimea. Economic sanctions in combination with the low price of oil are taking a toll on the Russian economy. Nationalism will only go so far to cover up the economic pain felt by the Russian people. If Putin loses support at home, he will have a much harder time convincing his citizenry that a proxy war in Ukraine is a good idea. Russia today is weaker economically and more overextended militarily than it was a year ago.

Western leaders should cut Russia out of the SWIFT system, a secure messaging system used by thousands of banks for international money transfers. This would be detrimental to Russia’s banking sector. In addition, Russian authorities should be held accountable for the illegal expropriation of private property in Crimea. Citizens and private businesses that have lost assets in Crimea—assets that are estimated to be worth billions of dollars—must be empowered to take the authorities to the International Criminal Court. The international community can ensure that there is a clear path for such legal action.

Now is not the time to forget about Crimea; now is the time to remind the Kremlin that the transatlantic community is still driven by democratic values and respect for the rule of law, and that there are real consequences when these laws are broken.

Image: People hold long lengths of cloth in the colours of the Ukrainian national flag as they take part in a rally against the annexation of the Black Sea peninsula of Crimea by Russia, in Odessa March 30, 2014. Russia said on Saturday it had no intention of invading eastern Ukraine following its annexation of Crimea, while the Black Sea peninsula's Muslim Tatars demanded autonomy. REUTERS/Yevgeny Volokin