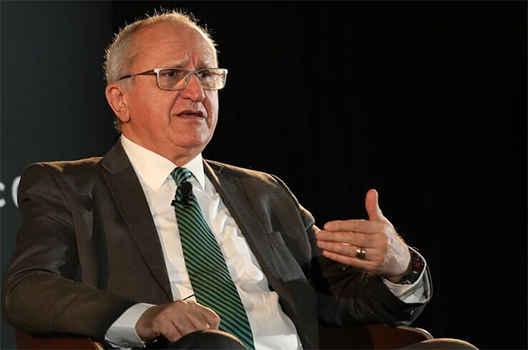 Despite US President Donald J. Trump’s threat to pull the United States out of the North American Free Trade Agreement (NAFTA), it will be much harder to kill NAFTA if the US Congress does not approve a revised trade deal, said Jesús Seade, who served as then Mexican President-elect Andrés Manuel López Obrador’s chief NAFTA negotiator in recently concluded, and often contentious, negotiations.

Trump has threatened action as a way to force members of Congress—Democrats as well as Republicans—to ratify the recently concluded US-Mexico-Canada Agreement (USMCA).

“If the new treaty doesn’t pass, NAFTA will be more resilient and more difficult to kill,” Seade said at the Atlantic Council’s Annual Forum in Washington on December 14.

In such an event, Seade said he “wouldn’t see a lot of political capital [expended] in also dumping NAFTA.” The Mexican and US governments would instead “probably resume negotiations to have something smaller and less contentious,” he said. Seade is undersecretary-designate for North America in Mexico’s Ministry of Foreign Affairs. He participated in a discussion moderated by Sabrina Rodríguez, a trade reporter with Politico.

Democrats, who will take control of the House of Representatives in January, say the USMCA does not do enough to protect American jobs and workers, while some Republicans think it is too protectionist.

The deal revises NAFTA, which went into force in 1994. Trump, then Mexican President Enrique Peña Nieto, and Canadian Prime Minister Justin Trudeau signed the USMCA  on the sidelines of the Group of Twenty (G20) Summit in Buenos Aires, Argentina, on November 30. The deal must still be approved by Congress.

Seade said that public support in the United States for the USMCA has built up over the past year. “So, dumping NAFTA and not approving [USMCA] seems to me not very likely because lawmakers are sensitive to public opinion and public opinion seems to have move in the direction of wanting trade,” he said.

While the trade negotiations between the United States, Mexico, and Canada were oftentimes contentious, Seade said they had produced a deal that is a “very significant development for the region.”

USMCA negotiations led to a “very satisfactory result for Mexico and also for the United States,” he said, noting that it is a “sea change in the way things are being done.”

Seade acknowledged that the negotiations were borne out of Trump’s hostility over trade deficits. But, he argued, while there are certain aspects of the agreement that appear to be hostile to trade—or protectionist, as some congressional critics claim—it will create an incentive for a higher level of investment linking the countries in North America. “Investment linkages are much deeper,” he said. “That begins to create a deeper form of economic union in the region.”

House Democratic leader Nancy Pelosi has said Congress may not pass the USMCA if labor and environmental provisions are not strengthened.

Seade, speaking to these concerns, said the USMCA addresses social issues: corruption, labor rights, and the environment. “The annexes on trade union formation [are] almost a blueprint of a best practice on labor issues,” he said. “What it is missing, in the viewpoint of many Democratic congressmen, is enforcement, and enforcement is a trade issue, it is not a labor issue.”