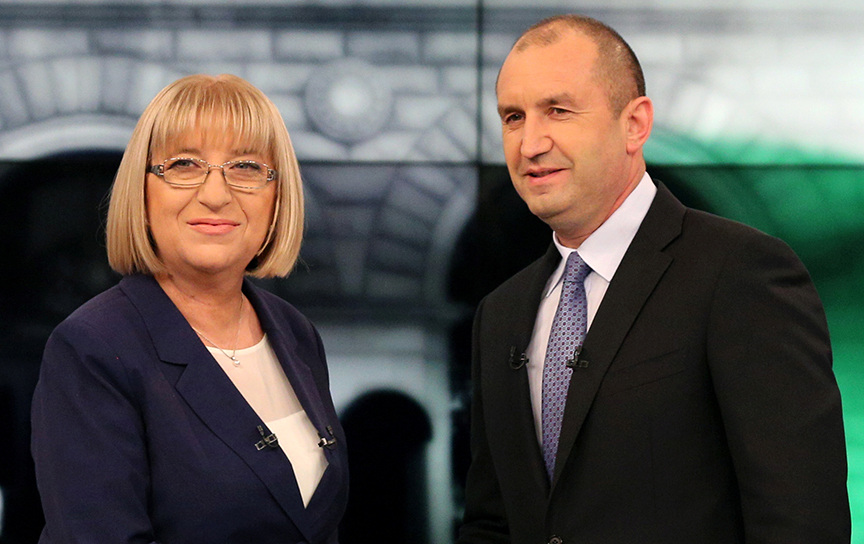 Bulgaria’s orientation toward Russia, and the renewed awareness of this shift, has become a major political issue in its presidential elections. While neither of the leading candidates has directly disputed Bulgaria’s membership in NATO and the European Union (EU), they have both argued that the EU should lift the sanctions imposed on Russia for annexing Crimea in March of 2014.

Tsetska Tsacheva, the candidate from Bulgaria’s ruling Citizens for European Development of Bulgaria (GERB) party, is likely to move away from this firm pro-Russian course just to set herself apart from her Socialist Party opponent, Gen. Rumen Radev, ahead of the November 13 runoff election.

The takeaway, however, is clear: Bulgaria is reconsidering its allegiance to the West and is trying to execute a precarious balancing act. This is no surprise as Bulgaria is fully dependent on Russian gas imports with no credible alternative in sight. Russian tourists have purchased a sizeable part of the property market in seaside towns in Bulgaria, thus creating whole areas which speak Russian, and currently seek to create Russian supermarkets and Russian schools, yet also participate in local governance. In addition, it has been speculated that Russia is financing some far-right parties in Bulgaria, such as Ataka.

In a surprising outcome, Radev narrowly defeated Tsacheva in the first round of the presidential elections on November 6. Russian newspapers expressed satisfaction with the electoral dominance of Radev, whom they called a “Russian friend.” Since neither Tsacheva nor Radev received more than 50 percent of the vote, they will face each other in the runoff.

It was not Radev’s unexpected victory that upended the political stability in Bulgaria. In a dramatic twist, Prime Minister Boyko Borisov reneged on his pledge to resign if his candidate, Tsacheva, did not win in the first round. Borisov now says he will resign if Tsacheva does not win the runoff. He said his decision to resign was based on his belief that a presidential vote reflects the approval of his government. His opponents argue that he is trying to blackmail voters by threatening instability.

In a previous presidential election, Borisov had boasted that he could get a donkey elected if he named it as his candidate. Apparently, this time his overconfidence has outweighed his otherwise acute political instincts. Borisov picked an uncharismatic candidate whom he refused to name until a month before the election. Tsacheva skipped the debates with all other candidates except Radev, thus legitimizing him as her only opponent.

Radev and Tsacheva have attempted to forge political alliances, but in both cases instability is looming. If Tsacheva, by some miracle, reverses the odds—probably by making generous offers and promises to the candidates who received the most votes in the first round—the country will be in crisis due to the perceived fragility of her government. If Tsacheva loses in the runoff, which is the more likely scenario, Radev will form a caretaker government backed by the Socialists in parliament, the Turkish party DPS, and some other parties. The problem is that the parliamentary vote has been highly fragmented since 2013 and a new government, regardless of the outcome, will be unstable. Even if new elections are held, a likely possibility, there is little chance that any party would win enough votes to form a stable government.

Another looming question on the agenda is the efficacy of the mandatory voting passed into law by parliament in April. The law postulates that if a citizen does not vote in two consecutive elections, his or her voting rights will be revoked. Turnout under mandatory voting was 54.51 percent, while turnout in 2011, when voting was not mandatory, was 51.83 percent. There is a great deal of doubt as to whether the law could be viewed as effective based on the increase in votes by2.6 percent. Many of these additional votes are attributed to people going to the ballot box to vote on the referendum attached to the presidential election.

The referendum in question is the other important consideration of this election. The referendum, proposed by Slavi Trifonov, a long-term evening entertainment showman, proposed switching from a proportional to a majoritarian parliamentary system, mandatory voting, and reducing subsidies for political parties. Although voters overwhelmingly approved the proposed changes, the referendum is still invalid because it fell 37,000 votes short of the roughly 3.5 million votes needed to turn the suggestions automatically into law. Trifonov has interpreted this result as an indicator of the public’sreadiness to overhaul the system. He is currently considering entering politics by creating a party. If he does, Bulgarian politics will have a very strong new player.

By all accounts, this is a landmark presidential election. It seems that the status quo is not approved by the majority, and alternatives are constantly multiplying. For the first time in many years, the governing party has lost its bastion in the capital, Sofia, and many other major cities.

Bulgaria will have a new president on November 13, but it will not have political stability should Borisov make good on his promise to resign if his candidate loses.

Gergana Dimova is a nonresident associate fellow at the Institute for Euro-Atlantic Cooperation.

Image: Presidential candidates Tsetska Tsacheva (left) of Bulgaria’s ruling Citizens for European Development of Bulgaria (GERB) party and Gen. Rumen Radev of the Bulgarian Socialist Party greeted each other before the start of their debate in Sofia, Bulgaria, on November 10. (Reuters/Stoyan Nenov)