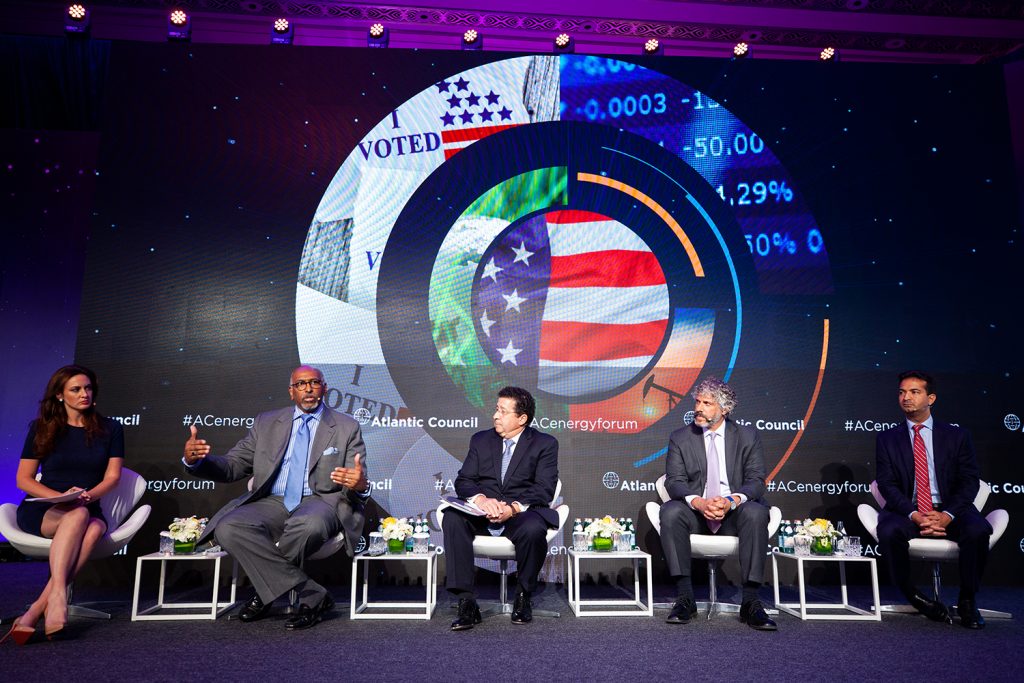 From the release of the Green New Deal to global protests on environmental policy, “climate [has become] a prominent national issue and all the attention it received in 2019 guarantees that it will be a top issue in an American presidential election for the first time ever,” according to former US Congressman Carlos Curbelo (R-FL).

Speaking at the Atlantic Council’s Global Energy Forum in Abu Dhabi on January 12, Curbelo argued that there has been a recent “Republican evolution on climate,” that has led Republican politicians at the federal and state level to begin to ponder their own climate policies in response to those of their Democratic colleagues. “The growth of the Republican side of the aisle,” on this issue “has been extraordinary,” he said. He noted plans by Republican House Leader Kevin McCarthy to roll out a new package of bills to address climate change and the formation of a bipartisan climate caucus by Senator Mike Braun (R-IN) and Senator Chris Coons (D-DE) as evidence that Republicans are beginning to move on the issue. This shift in thinking leads Curbelo to believe that “we are moving inexorably towards a national climate policy and…that will happen regardless of who wins the next election.”

While Avi Garbow agreed with Curbelo that climate change is likely “to take a high perch in no way that an environmental issue has ever had in a US election to date,” he disagreed that the outcome of the election will not change the likelihood of significant federal action on climate policy. The numerous actions the Trump administration has taken to rollback limited reforms undertaken by the Obama administration, including the Clean Power Plan to regulate carbon emissions from electricity plants, lifting restrictions on drilling and exploration of public lands and offshore waters, and withdrawing the United States from the Paris Climate Agreement, Garbow argued, means that it is hard to believe that Trump would not “continue his deregulatory push,” should he be re-elected.

Garbow added that the timing of the election is also important because “another four years is critical…for these Trump rollbacks to have any durability whatsoever. The fact is that the majority of the administration’s energy and climate priorities are just now getting finalized—litigation is now commencing on the rollbacks and the replacement of the Clean Power Plan—so it is critical from the Trump administration’s standpoint that the ‘Trump Justice Department’ if you will is in one year’s time the one defending these rules as they likely go up on appeal from the DC Circuit.”

As the US presidential election in November 2020 draws nearer, the energy policy platforms—including domestic energy, climate change, foreign, and trade policies—from the Democratic candidates, as well as the energy policies of a potential second Trump Administration, have become increasingly clear.

Michael Steele, former chair of the Republican National Committee, explained that “a lot of the rollbacks that you are seeing across the government are because Obama’s name was attached to the original decision,” as the Trump White House makes “a concerted effort to make [the Obama] administration and those eight years nonexistent in terms of policy.” Despite this opposition to Obama-era climate actions at the federal level, Steele pointed to “a series of actions that are being taken by states, governors—Republicans, Democrats, across the board—because of lack of federal action in this area.” He highlighted several initiatives in states like California, Florida, New Jersey, and Maryland to enact new regulations and standards for lowering carbon emissions, which he explained are happening because states “have to deal with the reality of what science is telling them is going to happen to their states.”

David Goldwyn, chairman of the Atlantic Council’s Energy Advisory Group, warned, however, that this state action could be affected by the 2020 election as well, because the Trump administration is already “taking on the states,” and saying to governors that federal policies “are the ceiling” for what can be done to regulate the energy sector.

The opportunities and pitfalls for Democrats

The climate plans of the 2020 Democratic candidates for president have already received significant attention as the primary season heats up. While there is concern among many Democrats that the plans of Senators Elizabeth Warren (D-MA) and Bernie Sanders (D-VT) are too radical for a general election, Goldwyn argued that “there is rhetoric and there is reality. I think the rhetoric is that Elizabeth Warren and Bernie Sanders cannot, without having both House of Congress and a lot of support from swing Democrats, intervene and [enact policies like] regulating fracking on private lands.” Garbow argued that in his view, there really isn’t “a tremendous difference between the climate plans at least that have been put forward by Elizabeth Warren, certainly Bernie Sanders. Even [former Vice President] Joe Biden’s plan is relatively aggressive in contrast to what we saw in the Obama administration and what we have seen since.”

Goldwyn warned, however, that the 2020 election will likely once again come down to swing states like Ohio, Michigan, and Pennsylvania, that have significant oil and natural gas industries. “Democratic candidates have to have their eyes on Pennsylvania and Ohio and places where they are gas producing states,” he said, “and not threaten the efficacy of their industry there.”

Regardless of the electoral significance, Curbelo argued that the eventual climate policies undertaken by the next president must be a compromise between the two parties. “If we are going to have meaningful, durable climate policy in the United States, it must be bipartisan,” he said, as “politically, there will be pain if we adopt a serious climate policy—there will be drastic changes in the economy and no party is going to want to face that on their own.”

All of the panelists agreed that climate change will be one of the top issues on the minds of voters as they elect a new president in 2020—even if the implications of their choice are still unclear.

As the US presidential election in November 2020 draws nearer, the energy policy platforms—including domestic energy, climate change, foreign, and trade policies—from the Democratic candidates, as well as the energy policies of a potential second Trump Administration, have become increasingly clear.