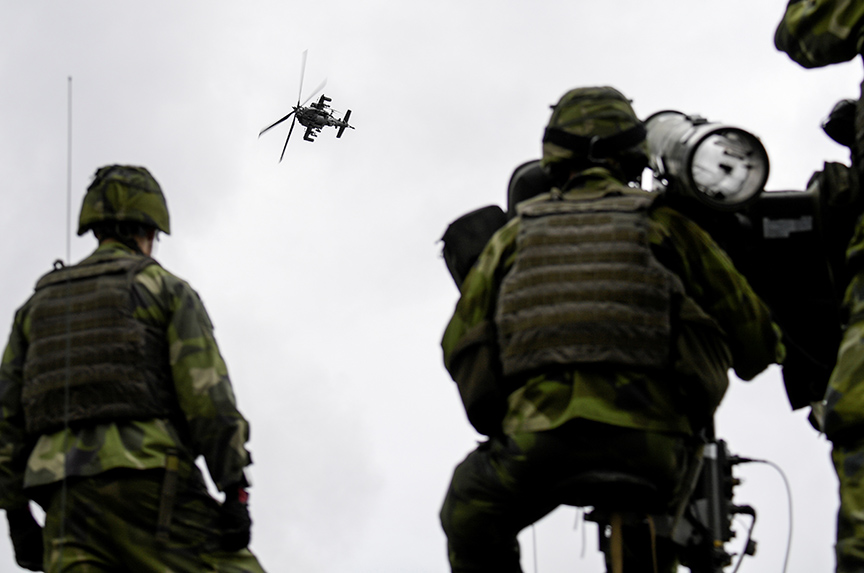 Swedish air defense personnel practice for the first time against attack helicopters as part of the military exercise, Aurora 17, on the Swedish island of Gotland on September 19. (TT News Agency/Anders Wiklund via Reuters)

Sweden is currently conducting its largest military exercises in over twenty years. Almost 20,000 Swedish troops are participating in Aurora17, which will run until September 29. They are joined by military units from Denmark, Estonia, Finland, France, Lithuania, Norway, and the United States, which has sent more than 1,000 troops, including a Patriot missile battery, helicopters, and a National Guard tank company.

On the other side of the Baltic Sea, Russia has been mobilizing what are believed to be up to 100,000 troops for its major exercise, Zapad 2017, which includes Belarus.

Meanwhile, Sweden’s popular Defense Minister Peter Hultqvist appears to have avoided a no-confidence vote over a data leak scandal. This means that the security policy doctrine, commonly known as the “Hultqvist Doctrine,” will survive as well. This doctrine seeks to balance the delicate issue of Sweden remaining outside NATO while deepening its partnership with the Alliance, as well as its relationship with the United States and, less controversially, Finland. Other major components of the doctrine include rebuilding national defense capabilities and taking a strong stance in favor of a rules-based security order.

The Hultqvist Doctrine has succeeded in a turbulent era in building confidence in Sweden’s security and defense. However, some challenges must be dealt with in order not to undermine that confidence in the long term.

For Sweden, Russia’s illegal annexation of Crimea in 2014 and the worsened security situation in the Baltic Sea was a rude awakening.

Russia’s previous Zapad exercise, in the fall of 2013, clearly illustrated an enhanced Russian capability to mount large-scale, complex military operations in its neighborhood in coordination with operations in other areas. A few months earlier, Sweden had painfully experienced the shortcomings of its military readiness during the so-called Russian Easter. After midnight on Good Friday, Swedish air surveillance spotted six aircraft rapidly approaching Swedish territory from the east. These aircraft practiced bomb attacks [according to NATO, these were nuclear bomb attacks] close to the Swedish border and then returned home to Russia without Swedish fighter jets being scrambled in response. Why? There were none ready to respond.

While Sweden is nowadays greatly concerned about Russia, it does not perceive an immediate threat of an armed attack. The risk is rather of being drawn into a crisis or conflict centered in other parts of the region, most likely on very short notice. The adversary’s goal would be to create freedom of movement in the region by taking control of airspace and/or territorial waters and land.

The Swedish island of Gotland is, as a result, in the spotlight. Russia may be interested in deploying air defense systems to Swedish territory in order to strengthen its capacity to deny NATO access to airspace over the Baltic Sea. In fact, a Russian attack against the Baltic States could be preceded by operations against Sweden.

Lt. Gen. Ben Hodges, the commanding general of the US Army Europe, described Gotland as a key location on his visit to the island in July. In an address to Swedish soldiers, Hodges said: “You have a strategically very important task here. I do not think there is any island anywhere that is more important.”

Russia’s interest in keeping Sweden’s military non-aligned has been explicitly repeated by its official representatives. Most recently, Russian President Vladimir Putin claimed that if “Sweden joins NATO, this will affect our relations in a negative way because we will consider that the infrastructure of the military bloc now approaches us from the Swedish side. We will interpret that as an additional threat for Russia and we will think about how to eliminate this threat.”

Despite its military non-alignment, Sweden made a little-known unilateral declaration of solidarity, embraced by Parliament in 2009. It states that “Sweden will not remain passive if another EU Member State or Nordic country suffers a disaster or an attack. We expect these countries to take similar action if Sweden is affected. Sweden should, therefore, be in a position to both give and receive military support.”

After the declaration was adopted, it soon fell into oblivion and remained there until the turbulent year of 2014 when Russia annexed Crimea. Through the Hultqvist Doctrine, Sweden has been able to assure others of its commitment to common action in case of a crisis in the Baltic Sea, despite the lack of security guarantees. Given the strategic situation in an area with a high degree of security interdependence, this Swedish reassurance contributes to regional stability.

The main components of creating that confidence have been political engagement and cooperation, a track record of high military standards and interoperability, participation in advanced exercises, and the signing of the host nation support agreement with NATO, which facilitates giving and receiving military support. In order not to undermine that confidence in the long term, there are some challenges that must be overcome.

While the process of strengthening defense and deterrence is under way, it is progressing slowly and with low levels of funding. Sweden has managed to ensure international confidence in its commitment to increase operational defense capabilities, despite the risk of falling under 1 percent of GDP in defense spending. A failure to substantially strengthen national defense will undermine the respect and trust that Sweden has earned.

The United States is crucial for Baltic Sea security. Sweden is dependent on bilateral relations to maintain US attention, and has succeeded to a surprising extent. In May, US Defense Secretary James Mattis declared that if the Russians were to attack, “America will not abandon democratic allies and partners, and we will stand with Sweden … It’s not a NATO ally, but it is still, from our point of view, a friend and an ally.”

But the unpredictability of US President Donald J. Trump’s administration casts a shadow over the bilateral relationship. In addition, the driving force for US engagement with Sweden is tightly knitted with its treaty commitment to protect the Baltic States, which in turn is connected to the credibility of its global network of security alliances. An American decision to assist Sweden will be made from this perspective, which may or may not align with Swedish needs and interests.

On Sweden’s relationship with NATO, the key question is whether the two can get any closer. While Sweden counts on others for military assistance, being militarily non-aligned puts obstacles in the way of joint operational planning with NATO. The security interdependence of the region makes this a concern not only for Sweden, but for allies as well. Increased information sharing and coordination on operational planning with allies could help decrease this gap.

Regarding NATO decision-making, as a non-ally, Sweden will not be part of the Alliance. If Stockholm would consider making Swedish military infrastructure, territory, airspace, and territorial waters available for NATO’s needs in case of a crisis, a seat at the table would facilitate the process. The best option as an outsider is to ensure a well-functioning mechanism for shaping decision-making, in parallel with what was developed between NATO and partners for out-of-area missions. Since a conflict in the Baltic Sea region is likely to develop very quickly, early partner consultations would be useful for all.

Finally, on the defense of the rules-based security order challenged by Russia, as a small power, Sweden has no better option than to raise its voice forcefully to protect this order. Clearly, it is in the common interest of the Baltic States to uphold strong institutional cooperation as much as possible. If Sweden and Finland remain outside NATO, it will be even more important to find ways to work pragmatically to strengthen, not undermine, the institutional framework.

Anna Wieslander is director for Northern Europe at the Atlantic Council and Secretary General of the Swedish Defence Association. Follow her on Twitter @AnnwieAnna.