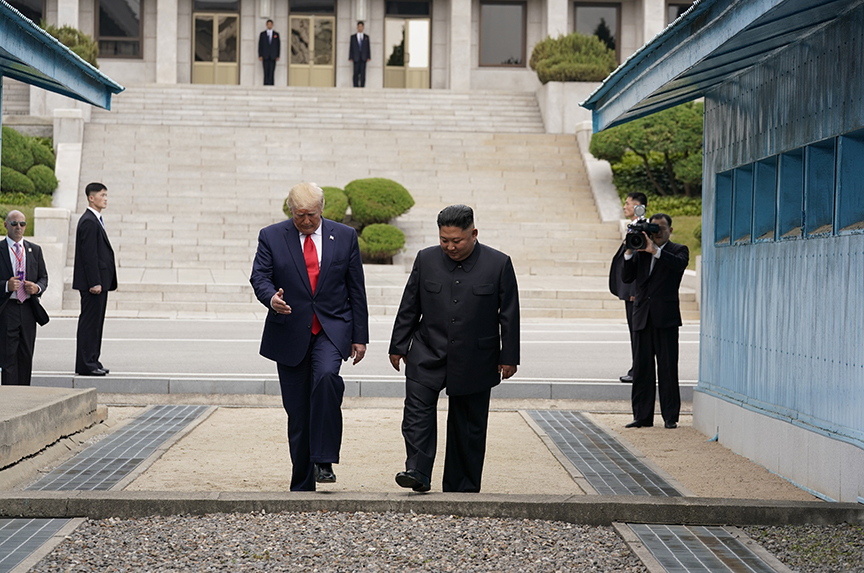 On June 30, Donald J. Trump became the first US president to set foot in North Korea. Trump made history when stepped across a low concrete marker accompanied by North Korean leader Kim Jong-un and walked a few steps into the North. The two leaders agreed to have their negotiators resume an effort to reach what has so far been an elusive nuclear deal.

“The United States, under the Trump administration, has disrupted the longstanding, but failing, US policies of past administrations by seeking to build trust from the top down,” said Barry Pavel, senior vice president, Arnold Kanter chair, and director of the Atlantic Council’s Scowcroft Center for Strategy and Security.

“This was helpful for reducing the near-term threat, but so far it is unclear whether it will help to achieve the denuclearization that we seek,” said Pavel. “How much trust building will be required before North Korea begins the process of denuclearization? Certainly, today’s ceremony and symbolism is not unhelpful, but it is unclear how and when this path will lead to a nuclear-free North Korea.”

Alexander Vershbow, a distinguished fellow in the Scowcroft Center and a former US ambassador to South Korea, said: “While President Trump’s DMZ meeting with Kim Jong-un was conceived mainly as a public relations stunt, it may prove to be an important step toward reinjecting momentum into the negotiations on denuclearization.”

The downside to this “spectacular historical stunt,” said Robert Manning, a senior fellow in the Scowcroft Center, is that “what Trump is oblivious to is that it helps legitimize Kim Jong-un, with Trump appearing the supplicant to ‘Dear Leader’ in the eyes of North Koreans.”

“What does the United States or Trump get for it? Mainly, a great stage prop for Trump’s re-election campaign,” said Manning, adding: “It was political theater masquerading as diplomacy, but one has to give Trump credit, it was a brilliant move.”

The Trump-Kim meeting on June 30 was the third time that the two leaders have met. They have had two summits in the past thirteen months. The first, in Singapore on June 12, 2018—the first time that a sitting US president had met the leader of North Korea—produced a joint statement in which Trump committed to provide security guarantees to North Korea, while Kim “reaffirmed his firm and unwavering commitment to complete denuclearization of the Korean Peninsula.”

The second summit in Hanoi on February 27 and 28, 2019, ended in failure as Kim refused to agree to complete denuclearization. Instead, North Korea insisted that all sanctions be lifted in exchange for dismantling only its most important nuclear facility—the Yongbyon enrichment facility.

“After two summits, Kim is testing short-range missiles and continuing to work on his missile and nuclear program,” said Manning. “Trump pretends this is not happening because he’s such great friends with Kim.”

Manning noted that despite Trump’s declarations of the great relationship he shares with Kim, “the word ‘denuclearization’ was not spoken. And is not that the central point of diplomacy with North Korea? The United States and North Korea still do not have a common definition for denuclearization. So how can it happen?”

US and North Korean negotiators have struggled to bridge the gap on how they define complete, verifiable, and irreversible denuclearization (CVID)—a key US demand.

US Special Representative for North Korea Stephen Biegun admitted as much in remarks at the Atlantic Council on June 19. “We don’t have that agreed definition of what denuclearization is and we do consider that to be a very important starting point,” Biegun said. “We will never get to our destination if we don’t know where we are going, so it is very important for us to agree upfront on what that destination is.”

“For both countries, denuclearization sits at the center of this discussion,” Biegun said, adding: “Our expectations have been made quite clear to the North Koreans, but Chairman Kim has also signaled to us during the course of [the Hanoi summit] how important this issue is to him.”

But Biegun also said that the “the door is wide open” for negotiations with North Korea.

“The agreement to intensify negotiations at the senior expert level, to be led by Steve Biegun on the US side, provides an opportunity to bring the parties together on a common definition of denuclearization and to agree on at least the initial stages of a roadmap leading to the achievement of that goal,” said Vershbow. “The roadmap would define the steps North Korea is prepared to take to freeze and eventually dismantle its nuclear weapons programs, and what reciprocal steps the United States is prepared to take in terms of sanctions relief, security guarantees, normalization of diplomatic relations and conclusion of a peace treaty.”

“Both sides will need to show greater flexibility if they want to bridge the gap that has remained since the collapse of the Hanoi Summit,” said Vershbow.

Manning said: “Beyond the show business and symbolism [of the Trump-Kim meeting], there appears potential progress in breaking the diplomatic stalemate as Trump and Kim spoke of agreement to starting working-level talks.”

A key to success of future negotiations would be if the North Korean negotiators are empowered to discuss denuclearization. Biegun said that ahead of the Hanoi summit US negotiators quickly realized that their North Korean counterparts were not empowered and that this topic was one over which Kim had total control.

Manning sensed some flexibility in the US position. “Before any more empty summits, they need to negotiate the framework and roadmap for a deal. To break down deep distrust on both sides, this needs to be a step-by-step, action-for-action reciprocal process. But the United States had held to an all-or-nothing hardline position. So this appears a shift toward more flexibility,” he said.

US-North Korea negotiations have been in what Biegun described as a “holding pattern.” Biegun reportedly received no response to a letter he wrote to North Korean Vice Foreign Minister Choe Son Hui asking to resume working-level talks.

Now, with a signal from Trump and Kim to resume negotiations, Manning said that the steps the two sides take can be big. “After Hanoi, Kim’s offer to dismantle all nuclear facilities at Yongbyon was left on the table. That will be the starting point for Biegun-Choe talks: Is the DPRK willing to dismantle all nuclear facilities at Yongbyon, including the tritium plant, under IAEA monitoring and verification? I would also add the HEU facility about 15 miles outside Yongbyon,” he said.

“If Kim is willing to do that, that would be a big frontloaded first step, capturing a large chunk of his nuclear weapons program. This should be worth a lot to the United States and Trump should consider a big package, including some suspension of sanctions,” Manning said, noting that at the DMZ, Trump hinted that this might be negotiable. “Also, in the package might be an exchange of liaison offices, security assurances, allowing some economic cooperation (reopen the Kaesong industrial complex, etc.), support for North Korea starting talks with the IMF/World Bank on membership, and four-party talks on a peace treaty,” Manning added.

While Manning expected senior working-level negotiations between the United States and North Korea to resume, he said he has seen no indication of any change in Kim’s view of denuclearization, “which unlike that of the United States, would come in the context of nuclear arms control—after the United States withdrew its nuclear umbrella from the Korean Peninsula, not as a political deal.”

“Kim’s goal remains  to be accepted as a de facto nuclear weapons state, like Pakistan and Israel, no sanctions and be treated as a normal country. Until that changes there is little cause for optimism,” said Manning.

Image: US President Donald J. Trump, accompanied by North Korean leader Kim Jong-un, stepped into North Korea at the border village of Panmunjom on June 30. Trump is the first sitting US president to set foot in North Korea. (Reuters/Kevin Lamarque)