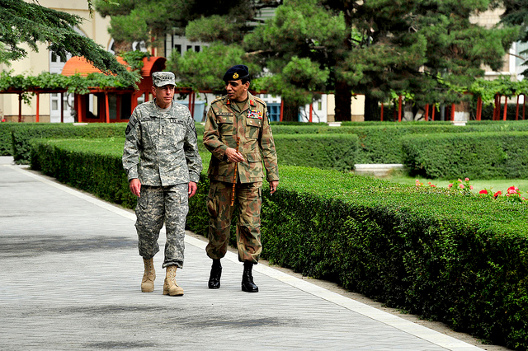 Prime Minister Nawaz Sharif finally made known his choice for the new army chief, arguably the most powerful job in the Pakistani military, one day before General Ashfaq Parvez Kayani retired after completing his second three-year term. Suddenly the talking heads and on-line experts shifted from speculating on who the next chief would be to assessing General Raheel Sharif as the new military leader of Pakistan. Most ignored the potentially subtle but important shift in civil-military relations that might follow this change of command. It is also worth remembering that this job changes the man in charge of the army as much as his personality affects the force that he commands.

Kayani has cast a long shadow on Pakistan’s history since he became Director General Inter-Services Intelligence in 2004 and then army chief in November 2007. He took over the army at a point when President Pervez Musharraf, who concurrently was the army chief as a result of political legerdemain, began to slide in strength and popularity. So, Kayani was critical to most political developments in the country beyond November 2007, effectively making defence policy and often foreign policy from that date forward. He was the go-between on the deal that brought back Benazir Bhutto and opened the door for Nawaz Sharif to return to Pakistan. He also tried to put a hugely civilianized army on the path to professionalization as a military force, while resisting the urge to actively take over government when it faltered. And he opened the door for the civilian government to talks with India and became the Pakistani interlocutor on the tripartite negotiations between the United States, Afghanistan, and Pakistan on the future of Afghanistan beyond 2014. Some saw him as an obstruction on those fronts, as he tried to balance the historical interventionist stance in Afghanistan and the deep suspicions of Indian coercive diplomacy against the need to stabilize relationships in the region. Not surprising, given his ISI background and his own experience as a young subaltern in the 1971 war with India that led to Pakistan’s defeat in then East Pakistan and a stalemate on the western front.

Kayani was also a major protagonist in the love-hate drama with the United States. He tried to put a logical framework on that fraught friendship of sorts. American wishful thinking, epitomized by the paen to Kayani penned by US Joint Chiefs of Staff Chairman Admiral Mike Mullen for TIME magazine’s 100 most influential persons issue of April 2009, captured that sentiment well:

I don’t remember all the details of my first meeting with General Ashfaq Kayani, the Pakistan army’s Chief of Staff. But I do remember thinking, Here is a man with a plan, a leader who knows where he wants to go. He seemed to understand the nature of the extremist threat inside Pakistan, recognized that his army wasn’t ready to meet that threat and had already started working up solutions.

This was a far cry from Mullen’s angry testimony before the US Senate Armed Forces Committee in September 2011.

“The fact remains that the Quetta Shura [Taliban] and the Haqqani Network operate from Pakistan with impunity,” Mullen said in his written testimony. “Extremist organizations serving as proxies of the government of Pakistan are attacking Afghan troops and civilians as well as US soldiers.”

Kayani’s taciturn approach to military and political diplomacy confounded his friends and foes alike. The failure of the civilian government to establish control over defence and foreign policy gave Kayani even more power than he had as army chief. The government allowed the military to heavily populate the defence ministry and the ministry of defence production with retired officers. The Prime Ministers, the titular heads of government though President Asif Ali Zardari pulled the strings of power, rarely exercised their prerogatives to get regular briefings by the head of the ISI or the army. In return they got little respect. (A small but telling sidelight on this was the break in centuries-old military etiquette that showed most photos of military leaders meeting indoors with their civilian “bosses” with their caps on their heads! The new chief might take note of the signal this sends.)

Much has already been written about General Sharif and his professional pathway to the chief of army staff. He, like his senior colleagues, has all the professional background to allow him to run the army. But the job will demand that he grow even further as a military and strategic thinker. He may well become a key fulcrum for the establishment of civilian supremacy in Pakistan, while continuing Kayani’s path to professionalizing the army and preparing it for the long internal wars that will be necessary to impose the writ of the state on the territories inside Pakistan’s borders. And, if India plays it smart, especially after the elections next Spring, the new army chief may be critical in reshaping Pakistan’s relationship with its massive eastern neighbor too. India needs to show some positive moves to reduce the threat of its deployments on Pakistan’s eastern flanks, even as it tries to shore up defences against China in its north east.

Raheel Sharif’s signal achievement was in altering the training curriculum of the Pakistan Military Academy (PMA) at Kakul, where he was commandant before taking over the XXX corps in Gujranwala. He introduced new methods of teaching officer cadets to undertake operations against militants. He was instrumental in shifting from exercises purely based on the Foxland-Blueland (India vs. Pakistan) construct to scenarios that involved operations against bands of irregulars led by a Mullah. During a visit to PMA during his tenure, I learnt of profile images of bearded mullahs being placed on easels in such training exercises at the PMA. He knew the academy well, having passed out in October 1976, and then having served as Adjutant under then commandant Major General Asif Nawaz. He took great pride in the physical training course he had introduced that involved an indoor automated firing range imported from Germany (where he had been trained and also served on attachment) and numerous physical obstacles involving fighting against militants and terrorists.

His Gujranwala Corps was entrusted with the job of checkmating any potential Indian thrust under the so-called Cold Start Strategy or Pro-Active Strategy of the Indian army, having been beefed up with the 1st Armored Division. And when he was moved to General Headquarters to become Inspector General Training and Evaluation, he presided over the release of a new Army Doctrine that spoke of a “multifaceted” threat to Pakistan, importantly shifting from a sole focus on India as the un-named enemy of choice for Pakistan. As chief he will now have to prove his commitment to combating the new internal threats to Pakistan. Three years is not a lot of time. But it will be important to see him continue the new doctrine and align it with the new doctrines of the other services. An integrated approach will be key to success.

General Sharif will play a critical role in the possible emergence of a sustained democratic system in Pakistan and in improving its relationships with neighboring countries, especially Afghanistan and India. The chemistry between him and the Prime Minister will help shape the civil-military relationship. Kudos to the Prime Minister for naming a member of his inner circle as the new defence minister. Khawaja Asif will need to accelerate his knowledge of defence strategy and policy, and perhaps more importantly, defence economics, to better manage the defence establishment, while becoming an informed spokesperson for the defence services. This is a full time job. So the Prime Minister may well need to decide if two huge tasks, energy and defence policy, can be handled by one man. History has not been kind to civilian leaders who do not understand the military and its complexities in Pakistan. Yet, a huge opportunity has arisen for the new government of Pakistan to show that it can govern the country and its military effectively.

Even as the new army chief shifts the focus of the military to battling internal enemies, the civilian government will need to show its competence across a broad range of activities. The recent Turkish experience shows that good governance is the best weapon at its disposal. If it can deliver services to its people by creating an open and enabling environment for Pakistani businesses and the common man to operate effectively and efficiently, it will lay the ground for better management of the military. Much needs to be done to end the “Culture of Entitlement” that infects government and the military, especially at the higher levels. Fat cutting can only happen when the fat cutters are free of taint and imbued by selfless service. Greater transparency in reporting on failures and mistakes is also called for. Parliament will need to play an even more active role in that regard instead of becoming cheerleaders, as it did after the Abbotabad attack.

Prime Minister Sharif can also take the tenure of this army chief to prepare for reorganization of the higher defence command and consider devolving military responsibility to four-star regional and strategic force commanders. These generals could be selected by the same appointing authority that appoints the service chiefs. This will rebalance the power structure within the army from a steep pyramid to a balanced structure, and allow the army to function much more effectively and efficiently. A full and open discussion of these options is needed.

Finally, the new government and army chief have a chance to come clean with the Pakistani people on a number of reports that the previous government and the military headquarters promised but never made public. Making public the results of inquiries resulting from military operations in Swat and Baluchistan or on the Abottabad attack will not damage the military or the civilian government. Such openness and candour can only strengthen confidence in both institutions over time and allow them to work together for the common good.

This is a heavy agenda. But a necessary one. The onus now lies on both civilian and military leaders in Pakistan to make it work for the common national good.

Shuja Nawaz is the director of the South Asia Center of the Atlantic Council in Washington DC and the author of Crossed Swords: Pakistan, its army, and the wars within and Learning by Doing: the Pakistan Army’s experience with counterinsurgency.

Image: US Army Gen. David Petraeus, the commander of the International Security Assistance Force, talks with Pakistani Chief of Army Staff Gen. Ashfaq Kayani in the gardens of the Afghan Presidential Palace in Kabul, Afghanistan, Aug. 9, 2010. (Photo: US Department of Defense/Public Domain)