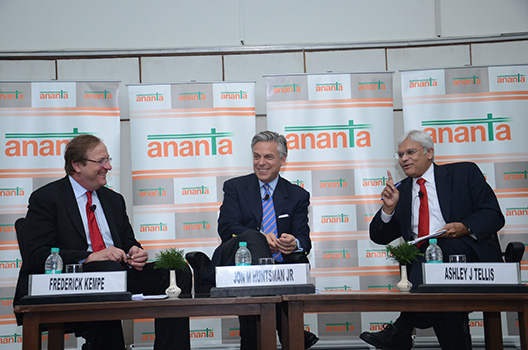 Since the Second World War, the United States spurred global economic growth and made substantial investments in Europe and Asia. As European nations face a crisis in Ukraine, China seeks to be the preeminent power in the Western Pacific and consolidate Asia into an exclusive bloc that is deferential to Chinese national and security interests. India’s economic rise since the 1990s has created the potential to transform it into a 21st Century Great Power. India-US cooperation at this historic moment is pivotal to maintain an international order of peace and security where nations can harmoniously rise together to meet the challenges of the future.

In 2012, the Obama administration announced that it was going to be intensifying its focus to the Asia-Pacific in a policy popularly known as the “rebalance to Asia.” The objective was to address the fact that the balance of powers in the Asia-Pacific region shifted in China’s favor following the 9/11 attacks and the U.S. war on terror. The policy signaled that the US would be refocusing its interests and resources toward the Asia-Pacific region by investing and developing new capabilities, strengthening existing alliances and investing in key partnerships. This “concert of democracies” strategy involved courting democracies in the region to manage the uncertainties caused by a rising China.

Currently, it is unclear whether there will be any formal version of a policy such as the Quadrilateral Strategic Dialogue (QSD) that was unveiled in 2007 by the Japanese Prime Minister, Shinzo Abe. But what is clear is the bilateral relations between Asia’s maritime democracies — India, the United States, Australia and Japan — are stronger than ever. These four countries interact regularly at a military-to-military level as well share intelligence regularly.

There is no denial that the U.S. presence in Asia provides stability and certainty to India. There is also increasingly less doubt that India finds comfort in a U.S.-centric world order based on shared values and mutual perceptions of stability. The U.S. presence in Asia ensures peaceful resolution of disputes as well as economic progress. It is unclear if India has the capacity or the resources to address challenges posed by a rising China on its own or with the cooperation of its other allies. For this reason, it is important that India and the United States deepen their engagement on military, economic and security levels to make the U.S. rebalance a success.