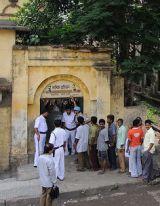 India
On December 8, India announced the results of the recent state elections, which were a severe blow to the ruling Congress Party. The Bharatiya Janata Party (BJP) won handily in Madhya Pradesh, where they were already a majority, and dislodged Congress to become the majority party in Rajasthan. The BJP also won, though by only a slim majority, in Chhattisgarh. Delhi showed the biggest surprise, where the new Aam Aadmi Party (AAP) won nearly as many seats as the BJP and far more than the Congress Party. No party holds a majority in Delhi, and the BJP, which won the most seats, has declined to form a government, citing a lack of a mandate, and prefers to sit as the opposition. The results are widely seen as a demonstration of the public’s frustration with the Congress Party, and as a preview of the national elections in 2014.

Afghanistan
Afghan President Hamid Karzai met with Iranian President Hassan Rouhani in Tehran on Sunday, December 8. Afghan officials state that the two leaders may enter into a cooperation pact. The pact would cover “long-term political, security, economic, and cultural cooperation” between the neighboring countries. The Iranian government has also urged Afghanistan not to sign the Bilateral Security Agreement with the United States, stating that the presence of foreign troops in Afghanistan destabilizes the region. Iran has significant soft power in Afghanistan, as well as strong cultural and historical ties.

Pakistan
Iftikhar Chaudhry, Pakistan’s longest serving Supreme Court Chief Justice, stepped down as this week, leaving behind a mixed legacy. Chaudhry was one of the judges to legitimize Pakistan’s military takeover in 1999, and was made Chief Justice by then-president Pervez Musharraf in 2005, only to be removed in 2007, and then reinstated. He has been criticized for exceeding the purview of his office and some of his highly politicized cases but he has been praised for challenging politicians and the security apparatus. Chaudhry is succeeded by Tassaduq Hussain Jillani, who has a reputation of being a moderate. His appointment can be seen as a step to bolster the elected government’s authority over the judiciary.

Iran
The Geneva nuclear deal between Iran and the P5+1 has already begun to bear fruit for Iran. A wider number of foreign suppliers are willing to trade with Iran. The Geneva Agreement agreed to facilitate ‘humanitarian transactions.’ As a result, Iran has begun building up its grain reserves in recent weeks and is importing raw sugar directly from India. The UK and Iran have also begun to improve their relations, with Iran’s envoy to the UK set to visit the foreign ministry in London. While these are modest changes, they offer Iran concrete evidence that a permanent nuclear agreement will be in its best interest.

Bangladesh
On Thursday, December 12, Bangladesh executed Abdul Kadar Mullah, an Islamist leader convicted of committing atrocities during the 1971 Bangladesh War, by hanging. Mullah’s death will likely further polarize Bangladesh, which has been wracked with political violence and deep political divides. At least five people were killed in clashes between protesters angered by the execution and the police. Many Bangladeshis, however, supported the execution. Mullah was the first person convicted by Bangladesh’s International Crimes Tribunal to be executed.