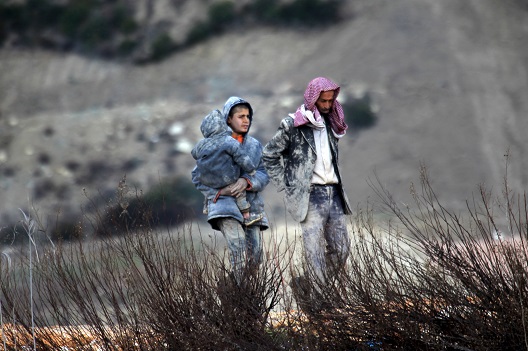 This series is from interviews with the lawyer Ayman Jalwan. It highlights the difficult choice that Syrians face—dying in the war zone that Syria had become, or flee the land he loved. Last year, he and his wife said goodbye to their families and joined the wave of citizens leaving the country. First they had to make it to Turkey. Then they needed to cross the cold Mediterranean to Greece. After that, they would have to deal with human traffickers in Eastern Europe to reach one of the few nations willing to welcome them: Germany. In this blogs series, Ayman Jalwan explains the decision to leave, the trials he and his wife encountered along the way, and the consequences of their decision.

So after my wife and I crossed the lands of the Free Syrian Army (FSA), we reached the village called Bab al-Hawa. It’s a border crossing between Syria and Turkey in an area that’s under the control of the Kurds. My friends give me a number for someone who can help us cross from Syria into Turkey. But this would be an illegal border crossing, of course.

This was a difficult time for me and my wife. Imagine you are walking between the mountains and the forest in the middle of the night with a stranger, someone you don’t know at all. You don’t trust him. So here are two young people with someone they don’t know. We could only imagine what bad things were awaiting us. Maybe this man is not good, I don’t know; he’s a stranger in the end. So these are bad times. But we have no choice. We just have to trust him.

So we stay in his house for a day, just to be able stay in one place where we can watch the Turkish soldier who is guarding the border. That night the man wakes us up and tells us the time is now—go! He cuts the fence for us and “Go!” And you are off. Imagine. We run fast. Don’t stop! Just run to the next point. So as we are running, I hear someone say, “Stop, or I will shoot you!” The Turkish soldier catches us. Of course I think this is the end of the story. So he takes us into custody, we sit down on the floor and he searches our stuff. He starts to speak to us in Turkish. Of course we don’t know this language! He has caught many people like us, and he starts to beat many of them. But he doesn’t do anything to me and my wife. And of course I’m very scared because I don’t know what he will do with us.

Then he starts to ask me, “You are a Kurd?” And I say, “No, I am an Arab.” In Syria, there are Kurds, too. They have their own language, and they have problems with Turkey. So when you hear the soldier saying “Are you a Kurd?” you think, oh my God! So the guard wants to be sure we are not Kurds, but he doesn’t speak my language—he doesn’t know much Arabic. He asks, “Where are you from in Syria?” I tell him, “From Deir Ezzor.” In Deir Ezzor, of course, all the people are Arabs. There are no Kurds there.

So, I try giving him my phone, but the Turkish soldier won’t take anything. He won’t take money, either. They have good discipline. Even if you if you hurt him, torture him, he won’t take money. I try to give him something else, like our wedding rings. He refuses. Then he looks at me and he says, “Now, I will let you go back.” “To where?” “To Syria, of course.” “Please, let me go to Turkey. Please. This is the last chance for me.” “Yok Türkiye!” In English, this means, “No Turkey!” In other words, “Don’t think you will get into Turkey in this way. No!” Ok. I give up. I tell my wife, “Come on, it’s at least good that we will go back to Syria without jail time in Turkey.”

He had searched our stuff, so he would have known that it was illegal to let us enter Turkey this way. I don’t know why he helped us. I really don’t know. Maybe because I begged him: I told him, I don’t want to go back to Syria because I will die there. But his face showed no sign that he accepted what I was saying—he was just angry, he just kept saying “no” to us. But then this changed to “Go. Git! Git Türkiye, git Türkiye!” We are lucky. I couldn’t believe it.

So we start running—me and my wife, we start running in the mountains. We have all our things with us, and this is a problem. And I am afraid for my wife. I don’t care about the stuff, just her. I want to grab her hand and go, go, go, running, running, running. Then we arrive at a place where we can take a bus. At the bus station when you arrive Turkey, they don’t ask you for your passport or anything like that. It’s no problem. You can just buy the tickets and go anywhere you want to.

Image: Photo: Internally displaced people, covered with mud, wait as they are stuck in the town of Khirbet Al-Joz, in Latakia countryside, waiting to get permission to cross into Turkey near the Syrian-Turkish border, Syria, February 7, 2016. REUTERS/Ammar Abdullah