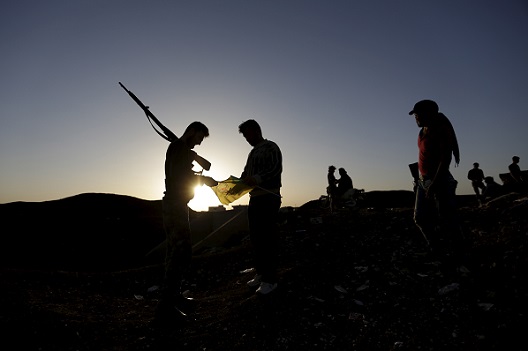 This is the second part of a series of interviews with the lawyer Ayman Jalwan. It highlights the difficult choice that Syrians face—dying in the war zone that Syria had become, or fleeing the land they love. Last year, Ayman Jalwan and his wife said goodbye to their families and joined the wave of citizens leaving the country. First they had to make it to Turkey. Then they needed to cross the cold Mediterranean to Greece. After that, they would have to deal with human traffickers in Eastern Europe to reach one of the few nations willing to welcome them: Germany. In this blog series, Ayman Jalwan explains the decision to leave, the trials he and his wife encountered along the way, and the consequences of their decision.

The army of Bashar al-Assad arrested many people and surrounded Deir Ezzor, but I had already received permission to leave the city. I had a contact in the government who had given me official permission to go. But I was afraid because I was wanted for military service; the army could catch me at any of the checkpoints on the road. But I managed to arrive safely in Aleppo, and I stayed there for four to five years. At first it was peaceful, but after that, the revolution arrived in Aleppo. The city started to divide between who was with Bashar al-Assad, and who was against him. This was 2013.

After four or five years in Aleppo, I tried to leave to go to Turkey. But I was very worried. It’s like I was surrounded in this city. I couldn’t go outside of it, because if I traveled outside, maybe they will identify me at a checkpoint—and I have to go to the army. As a Sunni, I would have no chance to survive in the army of Bashar al-Assad. They would send me right to the front line of a war I do not want to fight—a war against my friends, my brothers.

Another problem with leaving to go to Turkey was telling my mother. She was used to spending much her time with me. She was afraid. I had a younger brother, a pharmacist who had studied in the Republic of Georgia. After he completed his studies, he discovered that he had cancer. He died about a year before the revolution. So imagine: My mother has already lost one of her sons, and she is very afraid. She can’t imagine that she might lose me, too. She would say, “If you decide to leave, I may never see you again.” But many members of my family explained to her that she must let me leave the country because it is very dangerous to stay. Sooner or later they will catch him, they told her. And what kind of a life is it to stay here and always be running away from the people, from the government?

And my work as a lawyer stopped. Of course, I could not go to the courts. The military police were there in their cars, performing searches on everyone. They take your ID card or papers, search you, and check who you are on the computer: “Oh you are wanted, come, you must serve in the military.” It’s like this. They started catching young people in the streets and sending them to the war. It’s not a normal way of life.

But sooner or later I know they will catch me. So I make the decision to leave Syria. I trust in God to help me. I have a friend who has good relationship with the military police officers. So I come to a checkpoint, and of course I pay money to pass. The officer there checks me, but I give him money. This was on the road between Aleppo and Hama; I wanted to reach the lands of the Free Syrian Army (FSA), lands that are controlled by groups that are against Bashar al-Assad. I can’t leave the country and go to Lebanon via the official checkpoints because my name is on a list. If you want to get away from Bashar al-Assad, the FSA will help.

I am in danger, because I am afraid I will have to cross the lands that are under the control of Daesh [the Islamic State, ISIS, ISIL]. And because I am a lawyer, I also am wanted by Daesh. Why? Because of my job. Daesh thinks that if you work as a lawyer or philosopher or teacher or chemist, you don’t believe in God. You are the lawyer of the devil! To them, the law of God is the only law. The laws we study as lawyers are the laws devised by human beings, they say, not God. If Daesh catches anyone who studies law or is a lawyer, they have orders to kill them on the spot. So I am afraid to cross the land. You see the dangers I was facing there. I was wanted by the two sides, by Bashar al-Assad and by Daesh.

So of course I burned nearly every paper I had that showed that I had studied law. I carefully hid my official school qualifications in our bags. But thank God, the places we passed through there were not under the control of Daesh. They were under the control of the FSA. And sometimes we would meet groups from the Nusra Front. They did not do anything to us. They are very different from Daesh; they fight Daesh. They say this group, Nusra, belongs to al-Qaeda, but it’s very different from Daesh. If they know that you are a lawyer, it’s no problem. There are many people in Syria from many groups that want to control the various areas or make trouble. We prefer to cross where the Nusra Front is in control; it’s far better than Daesh.

If you meet someone from Daesh, you cannot speak with him. He will kill you—just kill you. With a person from the Nusra Front you can discuss your situation with him; you can convince him to let you pass. Someone from Nusra might say, “Why doesn’t your wife cover her head?” Then he might say, “Please cover your head, my sister. It’s not good not to, because God is…” and so on. Just that. But if someone from Daesh sees that your wife does not have her head covered, that’s it.

With the FSA, no—it’s different. The FSA groups just want to fight Bashar al-Assad. So I prefer to pass through areas controlled by the FSA, of course. They helped us. So finally we arrived in the lands that are under the control of the FSA, but we were very exhausted. It had been a long trip.

On the way there, we were in a bus, and the driver helped us many times. At every checkpoint he stopped at, he helped us. You just pay money, over and over again, to the government forces. The forces of Bashar al-Assad don’t care. Just give them money. You know the Daesh leader Baghdadi? If he wants to come to Syria and go to Damascus? No problem — just pay money. No problem—just pay money! It’s like Serbia, you know?