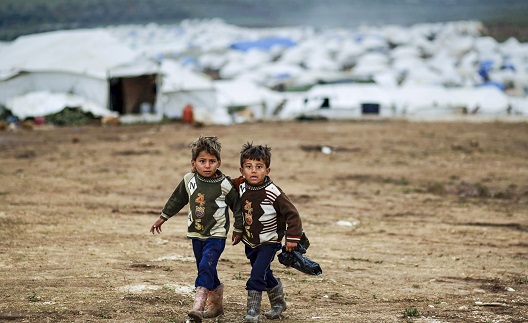 More than half of Syria’s pre-war population now falls into one of the following categories: dead; dying; disabled; tortured; terrorized; traumatized; sick; hungry; homeless. The regime of Bashar al-Assad is responsible for the bulk of this rampant, remorseless criminality. The administration of Barack Obama, if it stays on its present course, will make it through noon, January 20, 2017, without having defended a single Syrian civilian from the Assad-Russia-Iran onslaught. This thoroughly avoidable result may well serve to define Mr. Obama—accomplishments at home and abroad notwithstanding—as a failed president.

President Obama has provided historians with important—and potentially damning—evidence in his various interviews on the subject of Syria. Describing the September 2013 red line climb down—a body blow to American credibility not lost on Russia’s Putin—as his proudest presidential moment, will not likely attract critical acclaim in the decades to come. And White House spokesman Joshua Earnest continues to violate the first rule about climbing out of a hole: stop digging.

In his August 25, 2016 press briefing Mr. Earnest was asked about the administration’s failure to protect Syrian civilians in the face of what he described as the Assad regime’s “unconscionable use of violence against civilians.” He clarified, using language that defines vacuity, the administration’s policy as follows: “But our approach to the Assad regime has been to make clear that they’ve lost legitimacy to lead that country.” Claiming, in a sentence that defines wishful thinking, that “Russia shares this assessment,” Earnest suggested that the way forward toward ending mass murder is for Moscow to live up to its commitments and rein-in its homicidal client. He did not mention Russia’s own growing portfolio of war crimes in Syria.

In fact the administration’s policy toward Assad Syria (as opposed to ISIS Syria) rests on its desire to accommodate Iran—a full partner in Assad’s collective punishment survival strategy—so that the July 14, 2015 nuclear agreement can survive the Obama presidency. In the case of ISIS, Earnest noted with evident pride that the United States has put boots on the ground in eastern Syria and is at war with a loathsome terrorist group. In the case of offering Syrian civilians not the slightest modicum of protection from Assad, however, Mr. Earnest had an excuse evidently not applicable to ISIS: Iraq 2003.

According to Earnest, “We’ve got a test case just over the border in Iraq about what the consequences are for the United States implementing a regime-change policy and trying to impose a military solution on the situation.” Warming to the subject, Mr. Earnest went on to say, “And look, there are some people who do suggest that somehow the United States should invade Syria.”

Shame on a news media that consistently permits this dissembling to go unchallenged. Mr. Earnest, if asked, would be unable to name anyone counseling the invasion of Syria. Mr. Earnest would be unable, if asked, to explain why limited military measures designed to end Assad’s mass murder free ride—such as that offered by the 51 dissenting State Department officers—amounts to “regime-change” and “trying to impose a military solution.” Indeed, if challenged, Mr. Earnest would be required to retract his subsequent false claim that no critic of the president’s Syria policy has ever offered specific, operationally feasible alternatives to a catastrophe-producing approach.

The point here is not to vilify Joshua Earnest. He does not dissemble as a free agent. He does so on behalf of a president unwilling to say something like the following: ‘Look, I realize what a catastrophe Syria is. It’s the premier humanitarian abomination of the 21st century. I know that Russia and Iran have enabled a despicable family and its gangster entourage to commit mass murder and state terror. I’ve read all of the intelligence about Russia deliberately targeting civilian hospitals. I can see the effects that mass migration from Syria is having on our European allies and even on us during this election year. I get it all: a lost generation of Syrian children, people being shelled, strafed, sexually assaulted, and starved to death by their own so-called government. What I want people to understand is that I’ve had to make the hardest of calls. I think the nuclear agreement with Iran prevented a war and opens a door. I’m afraid that if I use cruise missiles or supply anti-aircraft weapons to make Assad pay a price for mass murder, Iran’s supreme leader—who sees Assad as an invaluable agent—will scuttle the nuclear deal. I may be wrong, but that’s the call I’ve made. That’s why I get paid the big bucks.’

A statement like the foregoing would provide a platform for useful debate. And it would spare Mr. Earnest the trouble of having to offer up excuses and alibis he surely knows are false and misleading.

The view here is that a colossal mistake has been made: one fully exploited by Russia and by an Iran not likely to abandon the nuclear agreement if its client gets spanked. Indeed, the supreme leader is probably as stunned as anyone by American passivity in the face of a civilian slaughter that is genocidal in terms of effects and results. But retiring the straw men and putting the real issue on the table ought to be a high priority. Doing so might actually advance the cause of democracy and self-government in America.

Image: Photo: Syrian boys, whose family fled their home in Idlib, walk to their tent, at a camp for displaced Syrians, in the village of Atmeh, Syria, Monday, Dec. 10, 2012. Freedom House via Flickr