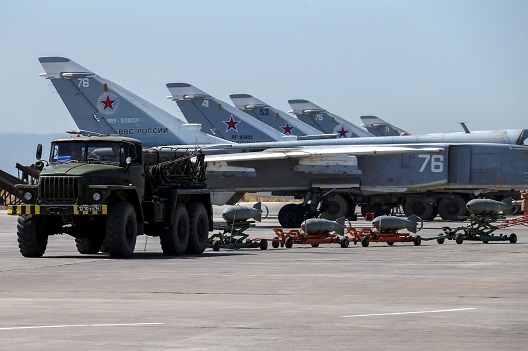 US officials repeatedly say that United States and Russia share the goal of defeating the Islamic State (ISIS). Why then has Russia apparently attacked the New Syrian Army (NSA)—a US-armed and trained force whose sole purpose is fighting ISIS? And how can the United States salvage its ability to recruit local partners against the extremist group?

The NSA is a small but relatively well-equipped force of several hundred in eastern Syria, largely drawn from and fighting in Homs and Deir Ezzor provinces. US covert and special operations personnel equipped and trained the unit, and it is tasked with fighting ISIS (not Russia’s ally, the regime). Thus, while it is an army of local fighters, it is also essentially a US proxy force. Similar to the Kurdish PYD and its local Arab partners, the NSA shares the US priority of fighting ISIS rather than the Syrian regime.

Through the lens of US policy, which sees the war on ISIS as separate from the broader civil war in Syria, Russia has no obvious reason to attack the NSA since it does not fight the regime. Yet according to an unnamed senior US defense official, on June 16 Russia launched an air strike on a New Syrian Army position in the strategic Tanf border area, which was recently seized from ISIS. By one account the strikes killed two NSA fighters and injured four others, in addition to damaging NSA vehicles. Other sources confirmed the attacks (though not the perpetrators).

Russia may have mistaken NSA fighters for ISIS ones. However, a US military source claims Russia ignored US warnings to stop the strikes, indicating the operation was planned and deliberate. It is therefore likely that Russia deliberately attacked and killed fighters that the United States trained, equipped, and deployed in service of a major national security interest and US military campaign. A deliberate Russian attack may have been aimed at disrupting the NSA’s intended northeast offensive toward the ISIS-held border town of al-Bukamal. If the NSA takes al-Bukamal, it would probably keep moving north to sever ISIS supply lines from Iraq, and in the process flank the ISIS-held city of Deir al Zour. The regime is already fighting to preserve its foothold in Deir al Zour, however, and likely intends to expand it after that. A NSA thrust northward would force the regime and Russia to cede strategic (and oil-rich) territory to a US proxy. Worse, these NSA fighters are both native to the areas and a projection of US power. Alternatively, Russia may have wanted to avoid a precedent of US-backed local forces retaking important terrain from ISIS.

Russian motives may never be known, but the fact remains that Russia felt confident enough to bomb a US proxy group in Syria and kill US-backed fighters that posed no immediate threat, had not come into conflict with Russia or the regime, and espoused an agenda to which Russia was nominally subscribed. The United States already has a poor record of protecting local groups that it supports in the insurgency in Syria, but those groups are not full-fledged partners since they fight both ISIS and the regime while the United States is focused on the former. The NSA, however, is an arm of a critical US counterterrorism campaign—a campaign built on having local forces do the bulk of the fighting.

Would-be US allies against ISIS are closely watching how the United States treats its local partners, especially whether it can protect them from unprovoked attacks by enemies they are not supposed to have. Yet in the wake of the Tanf air strikes, a senior US defense official responded “We will seek an explanation from Russia on why it took this action and assurances this will not happen again.” At this point, an explanation and promise are unlikely to inspire local confidence in the United States. It seems that embedded US personnel are the only way to protect groups against attacks by Russia and its partners. US groups already operate with Kurdish-dominated Syrian Democratic Forces fighting ISIS in northern Syria. Arab anti-ISIS forces such as the NSA are just as important given that they are indigenous to ISIS-controlled territory. They are also no less deserving of full protection by the United States, without which only an irrational fighter would join any US effort against ISIS.