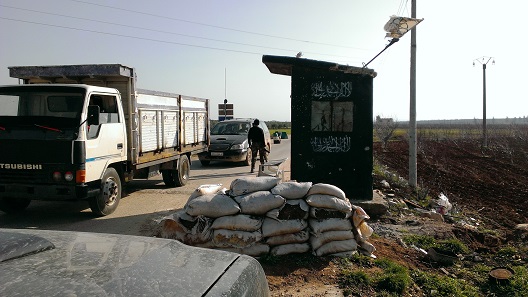 For the last five years Afrin (Kurdish: Efrîn) was the most tranquil of the three Kurdish enclaves in Syria. As in the other two Kurdish cantons, Kobane and Jazira (Kurdish: Kobanê, Cizîrê), the Syrian regime army pulled back from the region in spring 2012 and left it to the control of Democratic Union Party (PYD) forces, the Syrian sister-party of Turkey´s Kurdistan Workers Party (PKK). As in Kobane and Jazira, the PYD and declared Afrin’s autonomy in January 2014. Unlike Jazira, there were no regime forces in Afrin, and unlike Kobane, the Islamic State (ISIS) never attacked Afrin. Afrin only had frontlines with the regime enclave in Nubl and al-Zahra and a variety of different rebel groups.

In February 2015 I crossed into rebel held northern Syria and into Afrin. Once in Syria, it took about one and a half hours of difficult negotiations between myself and fighters from Ahrar al-Sham and Liwa al-Tawhid, and between the fighters and the armed wing of the PYD, the People´s Protection Units (YPG). Eventually, the rebel groups called Kurdish fighters from the Kurdish militia Jabhat al-Akrad to escort me to the first YPG checkpoint. The relationship between al-Jabha al-Islamiyya, which had recently become al-Jabha al-Shamiyya, and the Kurds was not friendly, but also not openly hostile. The Kurds in Afrin needed the border crossing to Turkey to remain open for trading, and they knew that Turkey would close the border if the Kurds seized it from the rebel groups.

Inside Afrin the situation was calm. The canton was under Kurdish control, but internally displaced persons (IDPs) from Aleppo and other parts of Syria and the YPG built defensive constructions on the frontlines with the different rebel groups. This relatively calm situation was mirrored by the YPG and its female counterpart the Women´s Protection Units (YPJ). While the cantons of Kobane and the Jazira introduced forced conscription for male Kurds to the YPG in summer 2014, the YPG was still a voluntary force in Afrin in 2015. Even the internal conflicts between the PYD and the Kurdish opposition parties that participated in the Kurdish National Council (ENK) were relatively calm. Unlike in Jazira, the parties supportive of the Iraqi Kurdistan president Masoud Barzani were traditionally weak in Afrin and the PKK had been dominate since the 1980s.

Although skirmishes occurred between YPG and the rebel groups, none of these skirmishes led to a full scale war. In fact, Afrin managed to maintain some trust with both its regime and rebel neighbors, as exhibited by  its role as a negotiator between rebel groups and the pro-regime forces in the Shia enclave of Nubl and al-Zahra.

The situation started to change when Turkey closed the Öncüpınar / Bab al-Salama border in March 2015. The border crossing was a lifeline for both rebel groups and the Kurds in Afrin, and keeping it open had ensured at least some cooperation between the Kurds and opposition groups. The opposition coalition al-Jabha al-Shamiyya, which at that time controlled the Syrian side of the border crossing, lost their most important tool for negotiating with the YPG and the Kurdish administration in Afrin. Turkish attempts to erect a border wall to prevent illegal border crossing also caused economic problems in Afrin.

The Russian-backed regime offensive from February 1-3 of this year opened a corridor to Nubl and al-Zahra, north of Aleppo city, and opposition forces in northern Aleppo around Azaz found themselves cornered with the regime to the south, ISIS  to the east, Afrin to the west, and a closed Turkish border to the north. The YPG and Jaysh al-Thuwwar, both members of the Syrian Democratic Forces (SDF), and began attacking the opposition to unite Afrin with the eastern Kurdish cantons. SDF is predominantly Kurdish YPG/YPJ forces—51,000 of its 55,000 are Kurdish—but it also contains 4,000 Arab and Syriac fighters. The fact that Jaysh al-Thuwwar has been prominent in attacking opposition forces around Azaz makes it difficult to simplify the current fighting to Kurdish versus Arab forces. However, Jaysh al-Thuwwar is probably hedging its bets. The main fighting groups all have international support: the US backs the SDF, Russia and Iran back the regime, and Turkey and Saudi Arabia back various rebel coalitions. Jaysh al-Thuwwar sees allying with the YPG, which it fought with against ISIS, and US support as its best chances for survival.

The rebel held-city of Azaz lies between Jarablus and Afrin. The YPG is trying to reach it before Turkish or regime forces. If the Syrian regime takes Azaz or Turkey establishes a safe zone there, the YPG would not be able to link the cantons of Afrin and Kobane. From Kobane in the east, the YPG is advancing east towards Jarablus against ISIS. Turkey has said that crossing the Euphrates is a red line, and has shelled YPG forces for trying to do so. The SDF forces are strong enough to fight ISIS and the rebel groups in the region, especially while taking advantage of Russian and regime air strikes against the opposition, but are not strong to survive  a confrontation with the Turkish army or Syrian army and their Russian and Iranian supporters.

Turkey is in a difficult situation. Although it has indicated that it is prepared to send ground forces into Syria, it is unlikely to do so without international backing. Instead, it has resorted to shelling Kurdish positions and supporting rebel forces against the YPG. On Friday, February 19, Turkish forces started shelling Kurdish villages and Afrin city. Turkish forces are attacking from Kilis (north of Afrin) and Sucuköy (west of Afrin). Turkish artillery shelled Afrin’s city center and its Ashrafia neighborhood, killing two civilians. The Turkish army also shelled the villages Deir Ballout, Hamam, Kafr Janneh, Meşalê Hêgicê, Senarê, Anqelê, Firîrê, Hec Hesnê, and Avraz, where three civilians from the same family were killed. The Turkish army crossed about 300 meters into Syria and pulled out some 500 olive trees in preparation of erecting a wall for security and to prevent smuggling.

Turkey and Saudi Arabia have also supported the formation of Jaysh Halab, a new opposition coalition that says that it will fight the regime, ISIS, and SDF. Its first operations were reportedly against the latter. Turkey also helped rebel fighters cross from Idlib through Öncüpınar / Bab al-Salam and through the village of Atme, just south of the Afrin canton, so that they can attack SDF forces. Atme, which hosts one of the biggest camps of displaced persons (the Olive Tree Camp) with more than 28,000 people, could become a new frontline between rebel groups and the YPG/YPJ. However, the most important battle will be in Azaz and Jarablus. It is a race for who will take the corridor first: Turkey, the regime and its allies, or the Kurds and their allies.

Thomas Schmidinger is a political scientist at the University of Vienna. In 2014 he published a book on Rojava in German, Krieg und Revolution in Syrisch-Kurdistan Analysen und Stimmen aus Rojava, which was translated to Turkish.