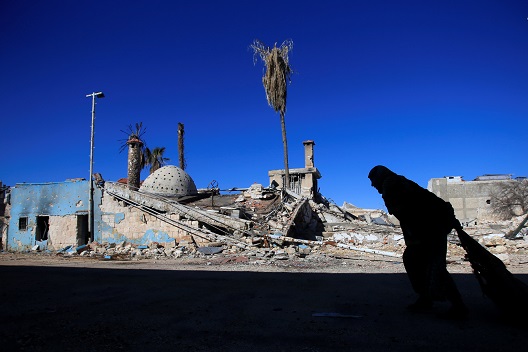 Below are remarks by Ambassador Frederic C. Hof at the Syrian American Medical Society (SAMS) annual gala in Lombard, Illinois on March 4, 2017 that touched upon economic rebuilding of Syria, the war on civilians, supporting armed Syrian opposition and the limitations of US-Syria policy.

Dr. Hamadeh, Mrs. Jabri, ladies and gentlemen. When I received your invitation earlier this year to key-note your Annual Fundraising Gala, one word came immediately to mind: Yes. In a conflict that has often brought out the worst in all who have touched it, the Syrian American Medical Society has acquitted itself with honor, courage, and excellence. I can and I will say that I am honored to be your guest. And yet, I am painfully aware that the contrast between what you have done and what I have failed to do is striking. It is this contrast that makes me feel unworthy of the honor you have bestowed on me.

Put simply, the contrast is this: you have succeeded in saving lives and mending bodies under the most difficult and even unimaginable of circumstances. I have failed, both as a government official and as a policy specialist in a nonprofit organization, to persuade my government to address more directly the primary source of Syria’s misery: unprotected civilians. Your success should fill you with pride.  My failure fills me with sadness and regret.

SAMS has been in business for nearly twenty years. But the past six years have put this organization and its people to the test. It is a test that is passed with flying colors every day.

Both inside Syria and in refugee camps you have protected and sustained civilian victims of unrestrained, unrestricted warfare. Conflict in Syria has, with rare exception, been a war on civilians. And although one might be hard-pressed to attribute absolute innocence to anyone who has taken up arms, there is no doubt that the strategy of the Syrian government has been one of deliberate state terror. There is no doubt that this strategy has featured collective punishment and mass homicide. And there is no doubt that the overwhelming majority of crimes against humanity in this conflict have been committed by agents and supporters of the Assad regime. The evidence amassed by international non-governmental organizations and the United Nation’s Commission of Inquiry is overwhelming.  SAMS – its volunteers and those who have been treated and saved – bear witness to the horror of what has taken place.

The American taxpayer has not been AWOL in responding to the humanitarian abomination that has unfolded over the past six years. Total US assistance has approached six billion dollars. The Obama administration, Congress, and – above all – American taxpayers deserve credit for this sacrifice. They have made a horrific situation less horrible than it might have been. Along with citizens who have contributed voluntarily to SAMS and other NGOs, they have saved lives that would otherwise have been lost.

Yet the doctors, dentists, and others who have volunteered their time and their skills to SAMS know better than anyone that their work has addressed the effects of deliberate civilian slaughter, not its cause. The sad and shameful fact of the matter is that an American administration left office on January 20th after having protected not a single Syrian civilian from the mass homicide practices of the Assad regime and its external supporters: not one.

I left government service in the fall of 2012 when I became convinced that the administration had no interest in addressing the source of mass homicide. I thought that by being able to speak freely on the outside I might have a better chance of influencing my government’s policy toward a conflict that was destroying Syria and destabilizing the region.

During World War II a distant relative of mine, General Joseph Stilwell, said the following to the press after leading a retreat out of Burma: “I claim we got a hell of a beating. We got to run out of Burma and it’s humiliating as all hell. I think we ought to find out what caused it, go back and retake it.” I claim, as an American, that the United States has taken a hell of beating in Syria. We spoke confidently about people stepping aside, red lines not to be crossed, and atrocities not to be tolerated. Yet we did nothing of consequence to protect civilians as the premier humanitarian outrage of the 21st century unfolded. As millions of Syrians were routed from their homes by barrel bombs and artillery barrages deliberated targeted on residential areas, the credibility of the United States in the eyes of adversaries and allies alike went up in smoke.

In a recent Politico article, a former Obama aide and a Washington, DC professor derided credibility as “chimerical” and cited the President’s “reluctance to get ensnared in Syria’s civil war . . .”  Yet we were more tightly ensnared than many suspected. After all, are political leaders and the states they head really exempt from the consequences of words not connected to deeds? Can we really say in all honesty that there is no connection at all between the dangerously destabilizing behavior of Russian President Vladimir Putin and conclusions he drew about the United States based on what he saw in Syria? And if the goal was to avoid getting “ensnared” in “Syria’s civil war,” was no thought given to guarding one’s tongue on the grounds that people would listen, watch, and react?

Those of us who tried to persuade the administration to protect civilians – if necessary through the application of limited military force – failed completely. We got a hell of a beating, for which Syrian civilians paid in full.  President Obama beat us totally. Relying on a broad public base of apathy and skepticism toward the Middle East, he got away with the false argument that only invasion and occupation could do any good; that anything short of that would be useless.

As a Vietnam veteran, I believe very passionately that military intervention is the option of last resort. And I know that no one dedicated to the protection of civilians sees violence as the first resort.

Still, there is no doubt in my mind that President Obama knew there were measures far short of invasion and occupation that at least could have ended the free ride for mass murder, thereby saving lives. Helicopters brought down from the sky and disabled on the ground could have persuaded pilots and crews that an easy, homicidal round trip was no longer in the cards. The free ride; the effortless application of mass terror; the boundless sense of impunity: all of it could have been ended or at least curtailed, with lives saved. None of it would have required the invasion and occupation of Syria.

Now we seem to be in a new era. What the arrival of President Donald Trump means for Syria and its people is not yet clear. Like his predecessor, Mr. Trump has made the defeat of the so-called Islamic State his top Syrian priority. Unlike his predecessor, the President spoke as a candidate of aligning American efforts with the Assad regime and with Russia. Although I think the possibility of working with Russia will be explored seriously, no doubt the President has discovered an unpleasant and unavoidable truth: if you ally yourself with the regime, you have allied yourself with Iran.

What, if anything, can be done to make an abysmal situation in Syria better for the Syrian people and Syria’s neighbors? I would suggest the following:

The record of the Syrian American Medical Society in saving lives and upholding the reputation of the United States is second to none. Those of us who have failed may have many explanations. Ultimately we have no excuse. We got a hell of a beating in Syria. It is a beating for which the Syrian people are paying in full. We’re going to find out what caused it. And we’re never going to stop trying to make it right.