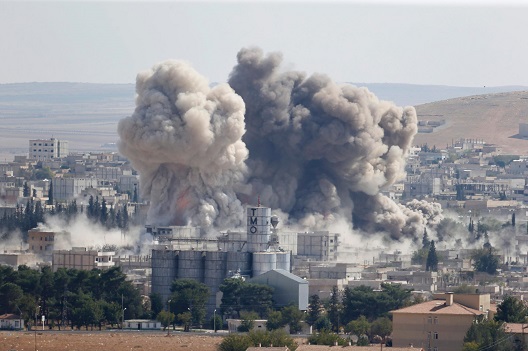 Photo: Russian airstrikes in Syria in 2015.

Despite Russian aerial support for Syrian regime forces, Jaysh al-Fatah has scored an unexpected victory over the Syrian regime and the Iranian militias supporting it. The opposition coalition Jaysh al-Fatah took Khan Tuman, a village located on the highway connecting Aleppo and Damascus. Syrians hope this victory marks a resurgence of Jaysh al-Fatah from a period of being weakened by internal ideological differences that limited its potential to effectively resist the regime in recent months and contributed to its withdrawal from Latakia under intense Russian bombing.

These ideological differences began in September 2015 when Jaysh al-Fatah member factions the Nusra Front and Jund al-Aqsa threatened to withdraw from the organization. Jund al-Aqsa withdrew at the end of October and issued a statement explaining its reasons, including its rejection of projects that “clash with Islamic Sharia” and the pressure put on it “to fight the Islamic State inside Jaysh al-Fatah.”

A source close to Jaysh al-Fatah, who declined to disclose his affiliation, stressed in private statements that the current number of Jaysh al-Fatah fighters exceeds 3,000, and there are negotiations ongoing with several other brigades and factions that intend to join. The source also stressed that “the re-launching follows a huge popular demand, and the latest massacres carried out by Russian and Assad aircraft in Aleppo are the main drivers behind it. Jihadist preacher Abdullah al-Mohaisany also played a major role in re-constituting Jaysh al-Fatah.” The source also added that “each faction is required to equip at least 450 fighters with light and heavy weapons. They should operate fully as part of Jaysh al-Fatah and be willing to fight anywhere in northern Syria.”

The source expressed the Syrian people’s frustration with endless political negotiations and the idea circulating among Syrians about the West’s complicity with the regime, even if only by ignoring the Syrian people’s suffering. The source ended saying: “I expect this powerful faction to be classified as an international terrorist group in the future, but I assure you that it has no hostile intent towards any Western country as long as it does not support the Syrian regime. If we consider the criteria for what makes a terrorist, the Nusayri [pejorative term for Alawite] tyrant Bashar al-Assad should be known as the most brutal killer in history. However, the West’s complicity with him is clear and we do not need anyone who doubts our fight to defend our land and religion. The issue is very simple: if they want to establish good relations with Jaysh al-Fatah and other powerful factions, all they have to do is topple Assad and save our people from him.”

All the factions that comprise Jaysh al-Fatah have a long history in fighting, especially the Nusra Front, which has used its capacity to prepare dozens of IEDs to destroy fortifications and defenses of the regime, and the newest group the Islamic Turkestan Party, which halted progress of the regime soldiers in Sahl al-Ghab and Jabal al-Akrad on the Syrian coast. The other factions are all comprised of Syrians. For example, most Jaysh al-Sunnah fighters are from Homs and Hama, while the founders of Ahrar al-Sham and Faylaq al-Sham have spent decades in the infamous Sednaya prison and rushed to take up arms when given the opportunity.

All armed groups are aware that the Syrian regime is stalling in the negotiating process and most Syrians consider the Geneva negotiations a waste of time. Abu Khaled, a fighter with Jaysh al-Fatah, said: “We strike our own prisoner exchange deals to take our children out of prisons, while not one prisoner has been liberated through an international request or through the implementation of a UN resolution, like the article on liberation of prisoners and detainees in Resolution 2254 adopted by the Security Council.” He confirmed: “Everyone who has taken up arms in Syria has an endless score to settle with the Assad family, and that is why all Western attempts to re-market Bashar as a leader and president of Syria have failed.” Finally, he added: “We will not give up arms before Assad and his family are crushed. The West… is fully aware of the nature of the regime’s crimes, but we will not give in to them. Every Syrian home has a martyr, detainee, or disabled person because of Assad. The war will continue and our future generations will fight until the goal is achieved.”