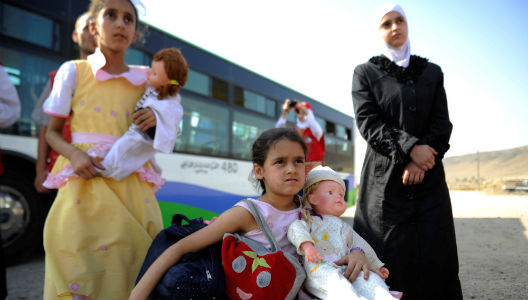 BEIRUT – A little girl shakes violently, crying as two men soothe her burned skin with mud, the only first aid they can find. A little boy trembles and screams as adults try to find gauze to put on his burns. Other photos, too horrible to share, show the charred bodies of two-year-old Hamza and seven-month-old Marya al-Tadmouri.

The brother and sister were burned in their sleep on August 27, when warplanes dropped a flammable substance on the al-Waer neighborhood of Homs, according to a doctor who attended the bodies. Their mother is alive, but in extreme shock, said the man, a dentist turned emergency doctor during the war, who asked to be identified as Dr. Abu Albousher. “Her situation is very bad,” he said, sadly. “She has lost her mind.”

In the last weeks of August, as international attention focused on the much-followed battle for Aleppo, another battle was just beginning. It started quietly, with the dropping of internationally condemned incendiary weapons on Darayya, a Damascus suburb and one of the few rebel-held areas where local civilians had not been shoved aside by violent, well-funded Islamist groups. Days later, the warplanes came to al-Waer, the last remaining opposition-held neighborhood in the city that Syrians once referred to as the capital of the revolution. Within days, both areas had signed agreements to evacuate their besieged civilian populations to government-run reception areas and their fighters to Idlib, a governorate in the north of the country that is now under rebel control.

Darayya and Homs were among the first to join the Syrian uprising in its early days. Now they are the first to experience the same brutal endgame, one that is likely to continue to other areas: a heavy military assault with banned weapons, accompanied by an ultimatum to evacuate or be crushed and a settlement agreement that requires a mass population transfer.

“The regime wants one thing: to empty al-Waer neighborhood of its population, to expel the people who still have the soul of the revolution inside them,” Firas al-Said, a media activist from Talbiseh in communication with negotiators inside al-Waer, told Syria Deeply as the settlement was being finalized. “Sadly, the people inside now have only two options: forced migration or annihilation.”

In both Darayya and al-Waer, the government has demanded that all armed opposition fighters be transferred to Idlib. On Friday, some 300 civilians were evacuated from Mouadamiya, another suburb of Damascus, and taken to processing facilities in the nearby government-held district of Hrajeleh. The Hama countryside seems likely to be next, as the government extends its strategy of mopping up rebel-held areas and transferring their populations to other parts of the country. “After Darayya we may have other Darayyas,” said Staffan de Mistura, the United Nations special envoy for Syria, speaking at a press conference in Geneva.

What these areas have in common is that they have all been targets of the Syrian government’s ongoing “kneel or starve” strategy, in which government troops have kept rebel-held areas under siege for as long as four years. The civilian population, weakened by years of food and medicine shortages, cannot hold out against a sustained military assault. Now, the Syrian government is turning its attention to these besieged areas one by one, as part of a major military escalation that some see as a precursor to further division of the country.

“What is very clear is that the regime is trying to take over Damascus and its countryside, and forcibly displace those populations, and those residents – which are Sunni – to Idlib,” says Reem Salahi, a Syrian-American human and civil rights lawyer who works with a non-governmental organization in southern Turkey. “And it’s very interesting that they’re not being offered the option of being displaced to Daraa, which is much much closer. So there is a huge shift and political desire to move those populations to Idlib.”

In addition to being a symbolic victory, the surrender and mass displacement of besieged Syrians has several strategic advantages for the government. First, transferring large numbers of half-starved people into rebel-held areas will put the burden of supporting them on to Assad’s opponents. Second, the population transfers will free up the government to redeploy the troops now enforcing the sieges, and their allied militias, to other front lines: Hama for now, as well as Aleppo, where fighting is ongoing, and perhaps in the end to Idlib itself.

A member of Hezbollah, the Lebanese Shiite militia that is fighting in Syria alongside the Syrian government, suggested that the government will extend the current strategy to other rebel-held areas across the country. “As for Idlib, and any other area where there are concentrated numbers of people, he will use the same tactic,” said the Hezbollah member, who asked not to be named. “In the end they will leave Aleppo, and they will go somewhere else, even if it’s the last handspan of Syria. And this is war, and this is the nature of war.”

The rapid, domino-like fall of these besieged areas is the most recent result of Syrian president Bashar al-Assad’s ability to wait out international condemnation for war crimes. When the Syrian government used sarin gas on the civilian population in Mouadamiya in August of 2013, U.S. president Barack Obama’s threat to treat chemical weapons as a “red line” evaporated when Assad called his bluff. By brazening out what U.N. Secretary-General Ban Ki-Moon blasted as a war crime, the government was able to shape events on the ground as it waited for international attention to move on. In the end, the only repercussion for Assad was international monitoring, which has done little to stop the government’s use of weapons like chlorine gas, barrel bombs and incendiary weapons.

The tactic of withholding food and medical supplies, when used against civilians, is also a war crime under international law. But the Syrian government has pursued a strategy of encircling and cutting off rebel-held areas since late 2012. The sieges have ground on despite United Nations monitoring and condemnation, but with no provision for enforcement, leaving the government free to besiege these areas for years – and now, one by one, to force them into surrender.

“America said chemical weapons were a red line,” says Dr. Albousher, the dentist-turned-doctor in al-Waer. “But he used them, and they did nothing to him. What are they waiting for, America and Europe? Nuclear weapons?”

Annia Ciezadlo is a Senior Editor at Syria Deeply. She has been living and reporting in the Middle East since 2003, focusing on the politics of food and civilian life during wartime. She was a special correspondent for The Christian Science Monitor in Baghdad (2003–2004) and The New Republic in Beirut (2005–2007). She is the author of the award-winning book Day of Honey: A Memoir of Food, War, and Love.

Image: Photo: Girls that were evacuated from the besieged Damascus suburb of Daraya after an agreement was reached on Thursday between rebels and Syria's army, arrive to a camp inside the government controlled Herjalleh suburb of Damascus, August 27, 2016. REUTERS/Omar Sanadiki