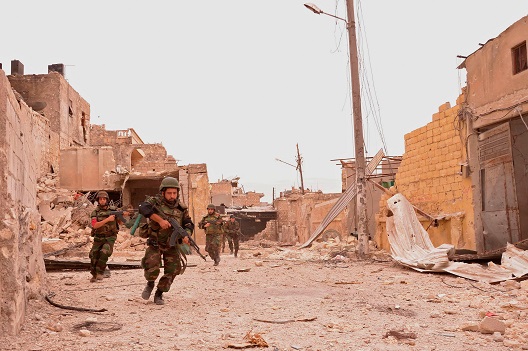 On November 22, the General Command of the Syrian Army announced the formation of its first official volunteer-based military force, the Fifth Assault Corps. The official statement described it as a commando force aimed at “fighting terrorism,” which would be deployed alongside other army units and foreign allied forces (but did not specify where). Among the populations targeted for recruitment are civilians who are not already drafted for military service, army deserters and government workers.

The Fifth Corps offers recruits a monthly salary and case settlement for those who previously deserted their military posts. Volunteers with government jobs are given year-long contracts and continue to receive their government wages and benefits, in addition to their Fifth Corps salary. A Facebook page claiming to be the official page of the force, named “the Syrian Arab Army – Fifth Corps,” which already has over 8,000 likes, listed a phone number for potential recruits to call and learn about the benefits of joining.

The formation of the Fifth Corps and its unprecedented army recruitment tactics highlight the complexity of the regime’s military situation in Syria. With the creation of the new force, the regime is attempting to address two major issues: the lack of indigenous manpower compared to the massive pro-Assad foreign presence and the need to institutionalize auxiliary forces into the army. How this plays out on the ground will determine the future of the Syrian Army as well as Russian-Iranian relations, their ability to cooperate and their positions in post-war Syria.

The Current State of Assad’s Army

Over the past five years, the Syrian regime has lost significant manpower. In July 2015, just two months before Russia’s military intervention, President Bashar al-Assad said that his army was facing “a shortfall in human capacity.” Russian forces were able to fill this gap, massively aiding regime troops fighting the opposition, and within a year were able to shift the balance of power on the ground.

Prior to the war, the Syrian army was estimated to be around 300,000 strong, composed primarily of mandatorily conscripted youths. As of October 2015, it was estimated to be between 80,000 and 100,000. This substantial decrease is the result of mass defections (beginning directly after army forces were ordered to attack peaceful protesters in 2011), high death tolls and draft dodgers. With such numbers, Assad’s forces would be unable to survive the war without the support of local and foreign militias, as well as military contributions from Iran and Russia.

Local militias were established to operate primarily within communities that were controlled by and important for the regime, such as Latakia, Tartus, Homs, Hama and the capital Damascus. Moreover, most of these militias do not necessarily fall under the regime’s direct control and much of their funding comes from shady pro-regime businessmen, with recruitment based on sectarian lines. Given the religious motivation behind such groups, the majority are known to operate under the leadership of the Iranian Revolutionary Guard Corps (IRGC) and Lebanon’s Hezbollah. In addition, local forces are expected to fight in areas near to their hometowns, limiting their deployment, allowing the regime to maintain control, albeit through proxies, of Assad’s support base in the coastal and center-western regions.

Currently, Assad is conducting his war against the opposition with few troops of his own. Since Russia entered the Syrian conflict in September 2015, Moscow has been wary of conducting military planning and coordination with the chaotic kaleidoscope of non-institutionalized, Iran-controlled militias. Russian commanders reportedly prefer to work with official Syrian state institutions. In response to Russian pressure, a month after Moscow’s entrance into Syria, the regime established what it called the Fourth Corps, combining NDF and other paramilitary groups.

Pro-regime columnist Mayson Yousef wrote in al-Watan newspaper that the creation of the Fourth Corps proves that the Syrian Army is “holding power and control and is capable of reorganizing and creating units,” reassuring “the friend [Russia] with its ability to control … circumstances.” She added that in doing so the regime is helping its Russian supporters. Following its creation, the Fourth Corps made advances against the opposition in Hama with noticeable Russian air support. However, given that auxiliary groups such as the NDF are still active over a year after the establishment of the Fourth Corps and have not merged with it, this indicates that full coordination between Russia and Iran has not been successful, at least until now, and that the Syrian army is unable to influence all non-state forces to align with its larger strategic objectives.

The creation of a volunteer military force under the command of the Ministry of Defense suggests that the regime is trying to gain some control over local forces. Multiple pro-regime media outlets reported that Hezbollah and Russia are taking lead roles in funding the Fifth Corps. This implies that another attempt by Russia and Iran to institutionalize local forces is underway. In broad terms, the Fourth Corps failed in this goal, but it did establish some official army oversight on auxiliary groups in Latakia and Hama. The Assad regime is making great efforts to get new volunteers to join the Fifth Corps, something that was not part of the Fourth Corps’ plan, one that solely focused on already-established auxiliary groups.

The regime is employing nearly all mobilization means to attract new recruits. Other than the aforementioned salary – which is a great offer for Syrian youth facing high unemployment – the government is also using religious calls to incite recruitment. The Ministry of Religious Endowments (awqaf) ordered the head imams of mosques in regime-held areas to mobilize the youth to join the Fifth Corps. On December 20, the imam of the Grand Umayyad Mosque in Damascus publicly exhorted young Syrians to join the Fifth Corps during a televised Friday prayer. Leaflets promoting the new force were left in government-produced bread bags, and advertisements ran on state television and in newspapers. This indicates that the regime not only wants more troops, but needs Syrian troops in particular.

It remains unclear how successful the Fifth Corps will be, or whether it can overcome Russian-Iranian differences, but it indicates that the current state of the Syrian army is alarming on many levels. The future of the country’s defense forces is being propped up by long-term foreign investments. Assad is granting Russia and Iran long-term contracts to control what remains of the army, which may hinder post-war reforms of this state institution.

What’s more, over the past year, the Assad regime has further entrenched the sectarian divides of the Syrian army. Adding a force such as the Fifth Corps to the military and effectively institutionalizing sectarian auxiliary groups will only deepen the army’s sectarian nature, a move quite similar to that of Iraq’s decision to legalize the Shiite-led Popular Mobilization Units.

It is clear, at this point, that the state army in Syria will be inherently influenced by foreign powers in the long run. This consequence will not only obstruct the peace process among Syrians, but also regional stability, as Syria will likely continue to be the competition field of rival regional and international powers.

Abdulrahman al-Masri is a Syrian journalist and analyst who focuses on Middle East politics and security and foreign policy. He is also a fellow with The SecDev Foundation, researching information warfare and digital safety in Syria. Follow him on Twitter at @AbdulrhmanMasri.