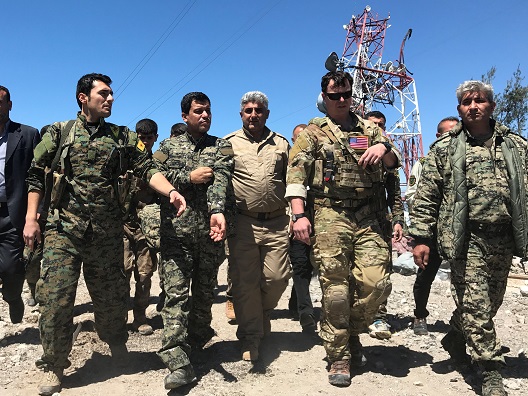 Photo: A U.S. military commander (2nd R) walks with Kurdish fighters from the People's Protection Units (YPG) at the YPG headquarters that was hit by Turkish airstrikes in Mount Karachok near Malikiya, Syria April 25, 2017. REUTERS/Rodi Said

The visit of Turkish President Recep Tayyip Erdogan to the White House offers an opportunity for two NATO allies to get to “Yes” on Syria. It is important that they do so. Yet as matters now stand it is doubtful that they will, and each side bears responsibility for a bilateral split that is entirely gratuitous and needlessly damaging. Yet Presidents Trump and Erdogan have it in their power to elevate their alliance over lesser considerations that divide them.

At issue are the war against ISIS (ISIL, Daesh, Islamic State) in eastern Syria and the broader question of Syria’s political future. Donald Trump inherited from his predecessor an approach to Syria rich in cynicism and abundant in incompetence.

In western Syria, there was no Obama administration operational response to the extremism-abetting, mass civilian homicide of the Bashar al-Assad regime: a multi-layered policy disaster radiating far beyond Syria and mitigated only in part by the Trump administration’s April 6-7, 2017 armed retaliation for a regime chemical assault on civilians.

In eastern Syria, the Obama administration commissioned a slow-motion war against a bogus “caliphate,” a collection of Iraqi Baathist and multi-national Islamist criminals using Syrian territory to mount terrorist operations against American allies: France, Belgium, and Turkey. Critically, the ground force selected by Washington to prosecute this desultory exercise was (and is) the Kurdish People’s Protection Units (YPG), the Syrian affiliate of the Kurdistan Worker’s Party (PKK). The PKK is a Turkey-and-Iraq-based organization designated as a terrorist group by both the United States and NATO.

On the Assad side of Syria’s violent meltdown, Presidents Trump and Erdogan have common ground on which to build. Gone from the White House is the self-defeating, ally-endangering belief that Syrian civilians would simply have to pay the price for keeping Iran on board for the sake of nuclear deal. President Obama correctly calculated the importance to Tehran of keeping Bashar al-Assad in power in at least part of Syria. He feared losing the nuclear deal––the foreign policy legacy jewel in the crown––if he were to complicate and frustrate Assad’s free ride for mass slaughter. The Trump administration demonstrated, on April 6-7, that which many officials in the preceding administration knew: Iran was quite capable of both watching its Syrian client absorb punishment for mass murder while adhering to an agreement manifestly in its interests to uphold.

That which Erdogan and Trump should commission in their Oval Office meeting is an intense bilateral engagement to craft a common strategy to promote the joint objective of Syrian political transition consistent with the Action Group on Syria’s Final Communique of June 30, 2012. The Obama administration resisted such an effort because it had no Syria strategy of its own, beyond subordinating a humanitarian abomination with grave, multi-continental political consequences, to appease Iranian sensitivities. The Trump administration is not so burdened. In the wake of the chemical attack it has no illusions about Bashar al-Assad or about a Russia that knew of the horrific assault in advance and did nothing to stop it. Neither does the administration see any value in subordinating the confrontation of Iran and Hezbollah to a nuclear agreement that Tehran has every reason to observe in any event.

Unfortunately, the prospect of getting to “Yes” on the military defeat of ISIS is not as promising as a common effort to neutralize the extremist-abetting behavior of Assad and his entourage. Ankara claims to be prepared to offer an attractive alternative to what it describes as “using terrorists to fight terrorists.” That such an alternative was not offered two years ago, before the United States Central Command (CENTCOM) became fixed in its affection for the YPG, is beyond regrettable. Turkish officials say they are being told––as they claim to have been told for months on end––that the capture of Raqqa (the ISIS “Syrian capital”) is imminent, and it is therefore too late to switch ground force horses.

One may respect the comradely bonds that have developed between American advisers and YPG fighters in eastern Syria and acknowledge the effectiveness of the YPG-dominated Syrian Democratic Forces (SDF) in their campaign to isolate Raqqa. One may accept at face-value a proclaimed sense of urgency in taking Raqqa now, long after ISIS atrocities were executed in Paris, Brussels, and multiple locations in Turkey. One may feel sympathetic to CENTCOM’s preference for an anti-ISIS campaign that has elevated militiamen over assembling a professional ground force coalition-of-the-willing to beat ISIS decisively and maximize the protection of civilians in the process. It is all understandable. But is it right?

The view here is that it is not right. President Trump should hear out his Turkish counterpart. If President Erdogan has a timely alternative to offer––Turkish ground forces, featuring soldiers trained in urban conflict––surely acceptance of that alternative would make sense, both in the prosecution of the battle and the preservation of an alliance relationship. If the President of Turkey has no such alternative to offer he should accede gracefully to the YPG role, acknowledging that ISIS will not be defeated from the air alone. And Washington will have to take steps to insure that the introduction of militiamen into Raqqa does not create yet another humanitarian disaster.

The alliance with a NATO partner is more important than a CENTCOM relationship with militiamen linked both to the PKK and, on occasion, to the Assad regime. Tampa’s preference for continuing the present course is understandable, if unacceptable. It is up to the two Presidents to put the alliance first. They should make every effort to get to “Yes” on Syria: all of it.