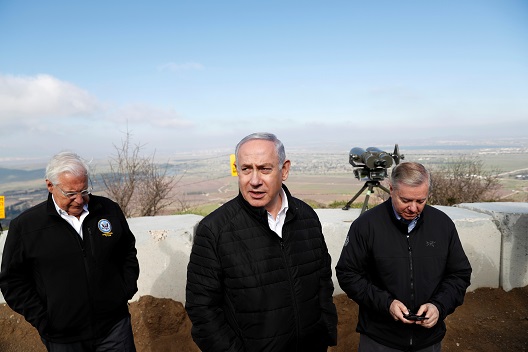 A new flurry of reports suggesting Israel may formally annex the occupied Golan Heights is music to the ears of Bashar al-Assad, a mass murderer who would welcome a decisive change of subject from his own criminality to what he will characterize as Israel’s theft of Syrian land. Among the delighted will be Iran and Hezbollah, whose resistance pretentions will be gratuitously elevated above their sewer of transnational terror, drug running, and money laundering. As there is nothing substantive to be gained by Israel through formal annexation and much to be potentially lost, one wonders why its proponents are so eager to do it.

The answer, of course, is local politics. Contestants for Israel’s premiership—locked in a close and bitter contest—are trying to outdo one another in appealing to an electorate that, for understandable and defensible reasons, would like to see a beautiful and relatively open piece of elevated terrain become part of Israel forever. Anyone who has ever experienced the contrast between the busy congestion of Israel-proper and the relaxing serenity of the occupied Golan would understand and even sympathize with this sentiment.

Indeed, for Benjamin Netanyahu and Benny Gantz there is no practical political alternative to catering to Golan-related public opinion during the electoral campaign. One hopes, however, that whoever wins will refrain from making Assad’s day. Formal annexation will do precisely nothing positive for Israel: it would improve neither the security of the Heights nor of Israel generally; there are no economic or social benefits to be reaped; there will be scant applause for the gesture anywhere in the world, and much scolding. The only parties standing to gain from the gesture are Assad, Iran, and Hezbollah.

For American politicians inclined to support annexation, caution is in order. President Trump’s desire to please a part of his political base and perhaps indicate his personal preference for the Israeli incumbent are not hanging offenses. But no American leader should jeopardize Israel’s security by inadvertently helping Assad, Iran’s Khamenei, and Hezbollah’s Nasrallah make the case to Syrians, Iranians, and Lebanese that anti-Israeli terror has a supposedly renewed basis in legitimacy. Surely it does not under any circumstances. But why hand these criminals new talking points for propaganda and proselytizing?

Sadly, Senator Lindsey Graham’s recent endorsement of annexation may prove to be decisively damaging. Graham has been solid on Syria. The last thing he would want to do is alienate patriotic, anti-Assad Syrians by permitting their oppressor to change the subject and their oppressor’s allies to reinvigorate their ‘resistance’ agenda. To permit him and them to do so would be to add to the endless chain of injustices inflicted on Syrians. No doubt Senator Graham thought he had good reason to speak as he did. Unfortunately, he seems not to have considered the potential consequences for Israelis and Syrians.

The betting here is that the Golan Heights will never revert to Syria. In 1967 the bottomless military incompetence of Defense Minister Hafiz al-Assad—a man adept at purging capable officers deemed politically unreliable but inept at defending a strong, high ground position—lost the Golan in the first place. In 2011 his son, Bashar, traded a promising peace mediation (one that might have recovered the lost territory) for war on peaceful protestors, the loss of political legitimacy, and the destruction of Syria. The Assad betrayal of Syria is indeed multifaceted. The Golan Heights will merit a long chapter when the full story of that betrayal is written down.

For the moment, however, there is nothing for Israel to gain from an empty, legalistic gesture that would provide aid and comfort to the Jewish State’s most determined enemies. Keeping hope alive that peace might someday be achieved with a post-Assad Syria enjoying legitimate, inclusive, and decent governance will strike some as naïve. Yet Israel’s record of humanitarian assistance for desperate Syrians and its opposition to Iranian dominance of Syria have indeed kept that hope alive, and by so doing have changed for the better the attitudes toward Israel of millions of Syrians.

It would be a shame to throw it all away for precisely nothing; nothing beyond helping Iran and Hezbollah renew their ‘resistance’ racket while making Assad’s day.

Ambassador Frederic C. Hof is Bard College’s Diplomat in Residence and a nonresident distinguished senior fellow of the Hariri Center.