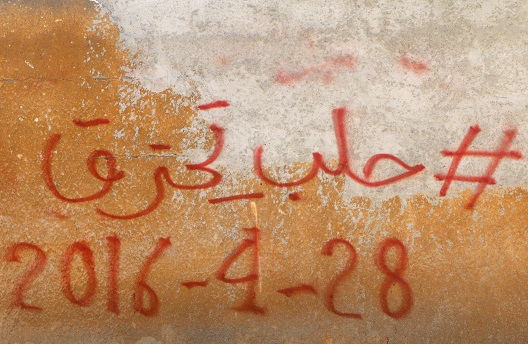 Ambulances are again wailing across Syria, most recently to care for the bombing victims of a hospital in Aleppo and the al-Zof camps in the Idlib countryside. The Civil Defense moved quickly to transport the injured, while regime helicopters dropped barrel bombs containing poisonous chlorine gas on Jisr al-Shughur city in the Kalasah, Bustan al-Qasr, and al-Sakhour neighborhoods. Aleppo also endured several air strikes which resulted in dozens of civilian casualties and brought an indefinite halt to all humanitarian and school activities.

Aleppo is witnessing a new round of bombings. On Wednesday, the Syrian regime bombed al-Quds hospital in Aleppo, killing at least 20 people, including children and doctors. On Friday, activists reported that the regime is continuing to strike civilian targets, including a clinic in the al-Marj district of Aleppo. The city of Maarat al-Numan in Idlib witnessed a massacre that took the lives of more than fifty civilians while shopping in a vegetable market.

In recent weeks, these areas all experienced a truce that restored a semblance of a normal life, quieting the Civil Defense and ambulance sirens. But the attacks are now taking place more frequently than in the past, according to humanitarian relief activist Samar Hijazi from Aleppo.

Hijazi confirmed the truce is now over, “The smell of blood has filled Aleppo and the remains of women and children are everywhere. The Syrian regime has begun attacking Salah al-Din and Seif al-Dawla, and twenty-five people were killed on the first day. In recent hours, three thermobaric missiles were fired in eastern Aleppo neighborhoods, causing major damage and targeting areas near hospitals and schools. Warplanes conduct air raids day and night in the Aleppo suburbs, which are under opposition control. The bombings cover the eastern, western, and central countryside of Aleppo, and the regime may target the suburbs with mortars in the future.”

“The first massacre resulted in seven civilian deaths and twenty injuries; a second massacre took place in Salah Al-Din on April 20. It was essentially a repeat of the first, with more than 21 dead and 56 injured. In Halwaneya last Saturday, air raids took another 25 lives and large numbers of civilians were maimed as a result of the extensive damage. In the al-Sakhour massacre, 15 individuals died and the count is rising. This campaign against Aleppo continues to expand despite a UN delegation visiting the city in mid-April,” she added.

“People are living a nightmare, and the UN visit has become a tragedy.” The activist believes that “the regime wants to evacuate the city and storm Aleppo on several fronts. The Kurds are targeting Castello road, which is the city’s only outlet,” said Hijazi.

People are again living in a state of desolation. Summer has begun, with temperatures sometimes reaching 45°C, with no place of refuge from the sun or the missiles. Many have fled the al-Zof camps and disbursed on the roads pleading with passing cars to transport them to safe places with tears streaming down their faces. One woman said: “In the name of God, take me away from here.” Ambulances rush to bring the wounded to area hospitals.

Omar from the Intellectual Youth Association in Maarat al-Numan reported, “On Tuesday April 19, 2016, at 12:20 PM a regime warplane bombed Maarat al-Numan with thirty rockets during its third pass. During the first two passes, the plane flew overhead to more accurately determine its target. Two missiles made direct hits on a vegetable market at peak shopping time, causing a horrific massacre.”

“A third rocket attack struck close to the market, resulting in only light damage and injuries. The massacre left more than 50 dead, 54 of whom were identified by name, and including six children and three women. Among the children killed was Amr Idliby, who won an award in a marathon race held for the city’s children a short while ago. The women included two schoolteachers.” Regarding the ceasefire, Omar said, “In light of the massacres committed by the regime, no reasonable person would say that there is a ceasefire.”

A state of anticipation and fear pervades after Turkey completely closed its border with Syria. Schools in Aleppo and Maarat al-Numan were shuttered, and all markets suspended their activities in light of the crowding that followed the truce. The agreement granted those residing in Syria a certain degree of freedom thanks to a relative state of safety and tranquility. But after the massacre, the crowds disappeared. According to Hijazi, people will become anxious and afraid once more and seek out safe havens, which will lead to a large wave of displacement along the Turkish border.

In the city of Idlib, people turn their eyes toward the sky when someone spots a plane overhead, hurrying away from each other and temporarily exiting the city until the plane leaves. Idlib is teeming with more than half a million civilians, most displaced from the northern and southern Aleppo countryside due to Russian raids according to Ahmed, an internally displaced person. “God is closest to us—no one cares or asks about us. There are no safe areas or no-fly zones.” Opinions on this truce are unanimous: residents and activists insist that Assad has gone to war against his own people once more.