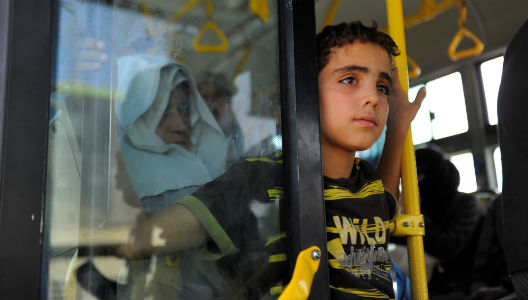 Photo: Civilians ride a bus to be evacuated from the besieged Damascus suburb of Daraya, after an agreement reached on Thursday between rebels and Syria's army. REUTERS/Omar Sanadiki

A few days after the Syrian regime forcibly evicted residents of Darayya, it began bombing areas around the capital of Damascus, despite the long-term truce between regime forces and opposition factions in these towns that had been in effect since 2014. According to the truce, the regime would not target residential areas and displaced persons if opposition forces stopped their attacks on the regime’s military sites.

Since the 2014 truce, these areas had experienced relative peace over the past several years, until the regime restarted its aerial campaign, bombing civilians in their homes. The regime demanded that combatants and their families be evicted and relocated to northern Syria and stated that it would only stop its aerial and artillery bombardment if its forces were allowed to enter the area.

The regime’s opponents consider this breach of the truce to be an extension of its tactics to eliminate the opposition. These recent moves come in the context of Russia’s firm support of Assad and at a time when the regime had recently tried to storm Darayya and had secured important military victories around Damascus and Aleppo.

The long-term truce—which the regime calls a “reconciliation” —is based on the idea of pausing the fighting in these areas, while each side maintains its position, and allowing civilians to move between areas under both sides’ control. Such agreements are common in several areas in Damascus; they began in the neighborhood of Barzeh in February 2014 and were followed by those in neighborhoods of al-Qabun and Tishreen and villages of Beit Sahem, Yalda, and Babbila later that year.

The opposition believes the regime used these agreements politically to promote itself to the international community before the June 2014 presidential elections (which Bashar al-Assad won, but the opposition and much of the international community considered illegitimate) to show it was ready for a political solution. Assad also benefitted from these agreements militarily by imposing a tight security cordon around Damascus to free his military for other fronts further afield, like Aleppo and Idlib.

Meanwhile, Assad has refused to implement similar “reconciliation” agreements in areas he considers unimportant, like the Old City of Homs. He has also continued to break other truces at opportune moments, taking advantage of the dire humanitarian conditions in many regions of the country.

For example, the city of Qudsaya is militarily important due to its location near Mount Qasioun, which overlooks Damascus, and proximity to important military sites for the regime, such as the 4th Armored Division and the Republican Guard. Thousands of displaced persons who fled from other areas of conflict have sought refuge in the city. According to the local council’s statistics, Qudsaya hosts more than 200,000 displaced persons.  Qudsaya was liberated from regime control in 2012 and there were many demonstrations against Assad’s regime, in which numerous defectors from the Syrian Army participated.

In December 2013, after a month-long siege, residents of the city arrived at a truce with the regime. According to the agreement, the siege would end, civilians would be permitted to enter and exit the city, and residents of Qudsaya who had been detained would be freed in exchange for stopping all demonstrations against Assad’s regime.

The agreement had remained in force for the past three years, until a few weeks ago, when the regime suddenly began bombing Qudsaya. It demanded that the city’s residents abide by new conditions in exchange for a cease to the bombing—most importantly, that they surrender and expel opposition combatants and their families to northern Syria. To the opposition, this looks like a new phase of forced displacement.

According to Moaz al-Shami, an activist and reporter from Qudsaya, the regime has paid no regard to the thousands of civilians in the region, killing and injuring dozens of people in its shelling. Al-Shami believes that Assad suddenly broke the agreement because “he’s trying to make use of time and achieve a military victory, taking advantage of international tolerance of his crimes and Russian support.” With this support, the regime now “wants to retake all areas outside of its control after being unable to do so for years when it signed the truces.”

The regime’s willingness to break truces and retake these areas shows how it has been able—with Russia’s constant assistance—to thwart the international community. It also shows the West’s, particularly the United States’, minimal desire to take any action against regime policy. Instead, the regime made these reconciliation agreements while it regained its strength. Meanwhile, Russia has taken an increasingly firm position, recently warning America not to interfere militarily in Syria against forces loyal to the regime and threatening to shoot down any aircraft attempting to launch strikes on these forces.

In January 2013, civilians in the city of Moadamiya, west of Damascus, could not find food to feed their children as a result of the crushing siege the regime’s forces had imposed on the city. As a result, they were forced to sign an agreement to surrender their weapons and not engage in demonstrations against the regime. In exchange, the regime would stop its daily shelling of the city and allow in food.

Although residents carried out their part of the agreement, the regime’s checkpoints remained in place, limiting the amount of food entering the city. The regime also began shelling the city again and recently demanded that all members of the opposition leave the city under threat of invasion.

A few days ago, a video was posted on Facebook showing a checkpoint manned by the 4th Armored Division—led by the President’s brother, Maher Assad—that illustrated how regime forces handled UN aid trucks on their way to the city. Troops in the division were shown smashing bags of food and returning them haphazardly, intentionally destroying them so that the food would be unfit for human consumption.

Even though the city poses no military threat to Assad’s forces, the regime is trying to forcibly displace the residents, using a siege to take advantage of the dire humanitarian situation. This is similar to what it did in Darayya—eventually, the regime managed to displace residents from the city and enable sectarian militias fighting on its side to settle in their place.

The situation has been repeated in other areas throughout Syria. In early August 2014, residents of the city of Kafr Nabuda, north of Hama, came to an agreement with the regime’s forces that it would stop targeting and shelling the city. In exchange, residents agreed not to allow the city to be a military base for opposition forces—fighters were to cease all military activities.

As a result, most residents who had been displaced, about 150,000 of them, were able to return to Kafr Nabuda after repairing their houses that had been destroyed in the fighting. After fourteen months of peace, however, the regime broke the truce. It gave residents a choice—their city could be turned into a hub for the regime’s ground forces on their way to towns and villages in the countryside south of Idlib, or the regime would go back to bombing the city. The second option was chosen, and residents were displaced once again as their city reverted into a battleground.

Years after the popular uprising against Assad’s rule began, it can be argued that the Syrian regime has managed to exploit civilians’ humanitarian needs and their desire for safety to persuade them to sign truce agreements. The regime has abided by these truces when they serve its interests, but broken them in attempts to reestablish authority over areas outside of its control.

The regime has made no secret of its desire to retake these areas; since the revolution began, Russia has not strayed from its official position that Assad is fighting terrorists, not moderate opposition, and will not step down. Most surprising is that the United States has accommodated both Syria and Russia—it believes that Russia wants to find a political solution to the crisis, even though the facts indicate otherwise, and it has repeatedly backed down from its red lines. Perhaps the United States thinks the regime will learn the old Arabic proverb, “In war, there are no true winners or losers.” In reality, the regime has learned that it will be rewarded for making truces and then breaking them and that there are no repercussions for shelling, besieging, or displacing civilians.