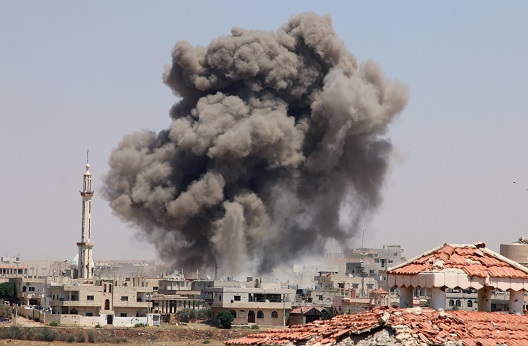 De-escalation and decentralization may soon disappoint those who see such programs as possible solutions for Syria. To be sure, Syrians will welcome any reprieve from violence. And American and European officials may acquiesce to political proposals that they have long since lost the leverage to shape. Even so, neither de-escalation nor decentralization will work unless Western officials do what they have spent six years not doing: craft a coherent and comprehensive strategy to guarantee security in, and promote the viability of, autonomous areas in Syria.

While Western states have adopted disjointed initiatives and Syrian rebels have squandered opportunities to secure success, the Assad regime has waged war as part of a comprehensive campaign for control. Although it has lost the complete control it enjoyed before the war, the Assad regime has created and consolidated a “Strategic Syria.” Along with its allies, the regime controls Damascus, most Syrian cities, and most of densely populated western Syria. Besides controlling these areas, the Assad regime has increased its influence in—by intensifying its intertwinement within—the Syrian state. In turn, it has used state institutions to perpetuate power and keep most Syrians “dependent on its rule.” Through the state, the Assad regime controls, regulates, and operates most industrial and commercial facilities—and pivotal land, sea, air, and telecom connections—in Syria. It secures, patrols, and resolves disputes in areas that are home to two-thirds of Syrians still in the country. It employs at least one million, and maybe as many as 1.5 million, Syrians in state institutions. And it provides millions more people with bread, water, wheat, and rice; electricity and fuel; transportation and telecommunications; and other services.

Using the destructive and productive tools of the Syrian state together, the Assad regime has built Strategic Syria through three types of tactical campaigns: consolidation/concentration, compromise, and destruction.

Second, because the Assad regime has lost control of resources and facilities required to deliver many services and subsidies, it has compromised with the self-styled Islamic State (ISIS, ISIL, Daesh) and the Kurdish faction known as the YPG, which dominates the US-cultivated coalition Syrian Democratic Forces (SDF). ISIS and the YPG/SDF control most of Syria’s resource-rich provinces—and the bulk of its domestically-sourced foods and fuels. The Assad regime has purchased goods from ISIS and the YPG, while providing them with services—electricity, water, refined petroleum products, and the like—that they cannot produce as effectively. Although the Assad regime has clashed with these entities to shore up Strategic Syria or protect key facilities, it has mostly focused on opposition areas—especially those that have tried to develop independent institutions.

Over time, the Assad regime has thus reduced the opposition’s ability to govern, cast a cloud of terror over non-regime areas, and presented Strategic Syria as a functioning, stable home for Syrians—including those opposed to, but still dependent on, its rule. Faced with yet another false choice, millions have moved to areas under Assad’s thumb. On the whole, by consolidating Strategic Syria and its control over state institutions, the Assad regime has positioned itself as an indispensable provider for Syrians and partner of the international community—thereby increasing its leverage in negotiations over Syria’s future.

The Assad regime will not abandon its strategy. It will work to ensure that de-escalation and decentralization do not undermine its control.

The regime and its allies will not allow de-escalation zones to evolve into the sort of safe zones that Western officials have been proposing since the war began. Nor will they allow their scheme to serve as some sort of experiment in decentralization. Instead, using de-escalation to redeploy and regroup, they will again engage in the sort of selective conflict that allowed the Assad regime to consolidate Strategic Syria in the first place. Three of four zones are disasters waiting to happen. Zone 1, in Idlib province, has become a “dumping ground” for Syrians still opposed to Assad—and may soon be the scene of this sordid struggle’s “bloodiest battle.” Zones 2 and 3 are zoos. In a patch of land between Hama and Homs and a strip east of Damascus, the Assad regime and its allies are caging up Syrians that still reject its rule. If and when the Assad regime begins its next phase of consolidation, it will blockade and bombard these areas as it has done before.

Western officials have acquiesced to the Astana Agreement because they lack the leverage to do much else—and because it will, despite its problems, save lives. Unless they adopt a more aggressive approach, however, they will allow the regime and the Russians do more damage in the long term—as they have, for instance, by putting in place and manipulating innumerable ceasefires and conferences over the past six years.

Decentralization will not work in the existing environment, either. Yes, the Assad regime has acquiesced to de facto decentralization in parts of Syria that it does not see as necessary for its strategic survival—or can’t hope to control now anyway. Yes, it may not be able to prevent or undercut Syrians’ independent initiatives or small-scale international programs. And, yes, Syrians will produce fuel from plastic, power homes through single-unit solar panels, access the internet through satellite links, teach their children in bunkers, and meet in the shadows to govern the bits of land they still hold.

But while Syrians have been resilient and ingenious, their solutions are not sustainable or scalable. Syria’s struggle began as a battle for a better future—not a quest to symbolize the survival imperative. Syrians were demanding for better schools, not bunkers; transparent governance, not secret societies; and dignity, not depravity. They were questing to be free of the false choices—bread or freedom, repression or terror, majorities or minorities, or liberty or life—that still shape their country today.

If they see de-escalation and decentralization as solutions in Syria, then American and European officials must make the programs viable. Above all, they must protect people and infrastructure—so that the Syrian state cannot, as it has through years of Western humanitarian and stabilization assistance, prevent or undo progress with the drop of a barrel-bomb. They must also provide financial and in-kind assistance directly to people in autonomous areas. By circumventing the Syrian state, officials would ensure that Assad does not use Western assistance to undermine Western strategic and moral interests. Once they do what is necessary, officials can worry about what is sufficient to develop autonomous areas.

American and European officials must craft a comprehensive strategy in Syria, using the opportunities afforded by nascent de-escalation and decentralization plans to protect people, invest in infrastructure, and reduce the Syrian state’s power over people. Otherwise, Syrians will suffer more while the West spends billions of dollars—taxpayer dollars—to achieve the opposite of what it has set out to do. Otherwise, Assad will win the war he has been waging—and we have been watching—all along.

Anthony Elghossain is a lawyer and writer based in Beirut. Follow him @aelghossain.

Image: Photo: Smoke rises after airstrikes on a rebel-held part of the southern city of Deraa, Syria, June 15, 2017. REUTERS/Alaa Al-Faqir