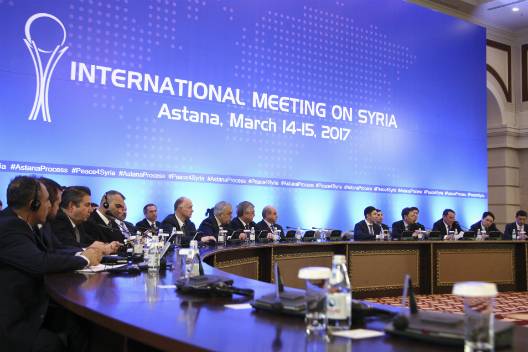 As representatives from Russia, Turkey, and Iran gather in Astana to pen a solution for Syria, the war’s end that appears within reach is yet further away than ever. Although Astana has enough participation from superpowers immediately involved in the conflict to offer a narrow window for peace, the involvement of only a limited spectrum of actors undermines the chances for a peaceful resolution.

Through a series of agreements in London and Zurich made in 1960, three outside states worked to bring independence to Cyprus by acting as peace guarantors. The fact that the states involved in Cyprus reached any kind of agreement at first gave observers hope that international stakeholders had found enough common ground to stabilize Cyprus and support its development. However, these agreements suffered from three main problems.

First, the Cyprus agreements included only a narrow spectrum of actors, ensuring that some stakeholders would act as spoilers if they felt it in their political interests. The agreements even largely excluded the will of Cyprus’ inhabitants, ensuring there was no public buy in and leaving simmering inter-communal tensions unaddressed, providing kindling for future conflict.

Second, the agreements did not delineate roles and powers between the guarantors, much less for the Cyprus state, leading to the guarantors competing against one each other amid a state of ambiguity. Each guarantor jockeyed for greater leverage over Cyprus in subsequent decades, undermining the durability of the agreement and purported neutrality of its guarantors. The agreements largely lacked any built-in enforcement or arbitration mechanisms, ensuring that when a dispute arose it would run the risk of spinning out of control.

For example, a Greek military coup in 1967 threatened the agreements as the junta reconsidered Cyprus’ status, and a following Turkish invasion further challenged the ability of the guarantor powers to abide by it. These events led to further displacement of Cypriots, hindered economic development, and further ethnically polarized Cypriot society. Although the agreements banned secession or partition, by 1983 the island was split in two as Turkish Cypriots declared their own republic in the island’s north.

Ultimately, outside guarantors failed to keep Cyprus independent and intact, instead sowing seeds for future conflict and division. Astana removes Syrian buy-in from any peace agreement by failing to account for Syrian needs and assigning three nations as guarantors while also failing to find common ground amongst a broader spectrum of international actors, including the Arab states, European states, and the United States. The fundamental Syrian contours of the war—from opposition demands to civilian concerns—must also be addressed if any lasting peace is to be achieved.

Without legitimacy from Syrians, Astana risks putting Syria on a course for renewed conflict. Syrians—both from the regime and opposition—are not represented. The opposition has little faith in any settlement made without greater inclusion of civil society and opposition voices.

Simply outsourcing peace enforcement to external states will not suffice if there is no buy in from Syrians and mechanisms are not built for resolving national and subnational conflicts.

The regime does not have much incentive to go along with the talks. Until now, Assad has violated all previous international agreements, and each time with support from Russia and Iran. The fact that two of Astana’s main participants are Russia and Iran should give hope that they will make Assad comply. However, there are two risks. First, any agreement is likely to be heavily biased in favor of Iran and Russia, and hence the regime as well, since these two parties will not harm their own interests in Syria, and so the opposition is likely to resist it. Second, if there is an agreement that shows a conflict of interests between the regime and its backers, the regime might still be able to violate it and get away with it. Assad’s backers need him as much as he needs them, and upsetting his gains will upset their own, leaving them with little choice but to continue to back him.

Astana’s possible enforcement mechanism remains opaque for keeping a ceasefire intact. While the three powers will, in theory, jointly monitor any ceasefire through a Russian-brokered “tri-lateral truce monitoring agreement,” the opposition does not find it credible given Russia and Iran’s role as belligerents, and the Syrian regime has already said it will not accept international forces to monitor the ‘de-escalation zones,’ only Russian ones. Even basic details on how this monitoring agreement is supposed to work remain unknown. It is unclear what would happen should one actor accuse another of violating the truce, suggesting that the “monitoring agreement” is more for appearances than on-the-ground durability.

Astana’s participants have shown little interest in stabilizing Syria, which would require developing an inclusive government that enjoys public legitimacy and ensuring an equitable reconstruction of development. Instead, they seem more interested in using Syria to guarantee their military and political presence in the region. For example, Russia’s obstructionism at the United Nations over the Idlib chemical attacks and its continued participation in the regime’s indiscriminate bombing campaign shows it is not interested in developing an inclusive government.

Moreover, two of the three Astana participants, and the two most heavily involved in Syria, are considered regime backers, putting the opposition clearly at a disadvantage in any agreement. As reconstruction efforts pick up speed, Russia and Iran have an incentive to reach an agreement that will allow reconstruction grants and loans to flow to them. This will allow them to further entrench themselves in the country and more broadly in the region, and turn their ‘investment’ in Syria into profit. By accepting Astana, the international community is in effect handing over what should be an international effort to rebuilding Syria to a small and empowered clique.

An important cog in the background of the Astana agreement is a strategy to divide Syria’s natural resource wealth between the regime, Russia, and Iran. The three have already cemented a plan to divvy up future revenue from the Khunayfis phosphate mines, currently held by the Islamic State, with Russia and Iran equally splitting an 80 percent stake in the mine’s output. Much of Syria’s oil and gas is in the east, around Deir Ezzor. The regime likely hopes that by retaking these areas (currently controlled by the Islamic State) it can hand off investment opportunities in its east to Russia and Iran in exchange for profits that will keep the government solvent and offset its crippling imports deficit. By focusing primarily on the economic dividends of Syria’s east, the regime and its allies are ignoring the humanitarian and political concerns on the ground. In addition to leading to more unrest, extremists will use the public’s disfranchisement to attract recruits.

Geneva can provide stronger enforcement mechanisms and greater transparency than Astana, but it requires full engagement from the international community and Syrians. Particularly, the United States has been unwilling to enforce any agreement or impose repercussions on violators, be they regime or opposition. The Astana process, though, pushes the international community and Syrians aside, essentially letting three powers divvy up Syria. With little involvement of the Syrian people and the greater world community, Astana will set up Syria not for peace and transition, but for a return to war.