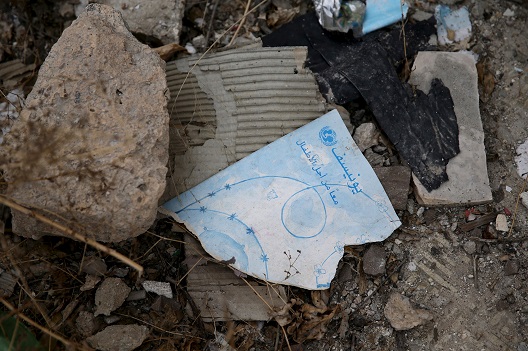 For several weeks, the cessation of hostilities (COH) in Syria led to a significant and widespread decline in violence. This gave the impression that parties to the Syrian conflict and their foreign sponsors had somehow reached a lasting ceasefire, against all odds. In truth, however, and quite apart from the expected sporadic violations, serious fighting in key geographies never ceased. The COH has steadily degraded over several weeks, and the most recent escalations in Aleppo, Idlib, Damascus, and elsewhere begs two questions. Whether the COH’s international backers including the United States should declare it officially void, and when to pursue a different strategy that avoids its inherent shortcomings.

Some of the recent increase in violence has consisted of regime attacks on parties excluded from the COH, such as the Nusra Front. These attacks would not violate the agreement, but other regime aggressions and outbreaks of fighting fall in a grey area, where the regime targets the Nusra Front, civilians, and opposition groups party to the COH at once. This highlights a key shortcoming in the COH, which either ignores the Nusra Front or allows the regime to target COH signatories and the Nusra Front simultaneously. However, the regime’s clear targeting of civilians and opposition signatories to the COH—as well as its continued blocking of humanitarian aid to multiple besieged areas—indicate it is no longer meaningful in the military or political sense.

From the start of the COH, Syrian monitoring groups have reported violations across Syria. They are mainly regime-instigated and include areas such as western Homs where the Nusra Front has no presence, and the Damascus suburbs which are dominated by Jaysh al-Islam. Even though the COH did reduce overall violence, local activists complain that it allowed international media outlets to ignore Syria, as though the war were over—which it clearly is not. Meanwhile, armed groups in Aleppo say things have continued as though the COH did not exist. Many Syrians rightly observe that the COH has enabled and publicly highlighted regime offensives against ISIS that inevitably were well-received by some in the West. In summary, while the initial relative calm was a welcome relief for Syrians, continuing violations, reactivated front lines, and unfavorable international implications are not.

As the reality of ongoing violence becomes unavoidable to Syrians, it poses grave political risks. Insisting on building a political process on a COH that is no such thing alienates important Syrian opposition actors from the internationally-backed political process. It also cements new military ‘facts on the ground’ while fruitless negotiations continue, hastening a de facto partition of Syria along current front lines. As that happens and fighting continues, the conflict further bolsters the positions of the regime and jihadists, at the expense of other local actors.

The US position on the COH’s unraveling is still unclear, but it will come under increasing pressure to act. This week, a group of ten armed groups in Syria, none of them on the COH’s excluded list, formed a new operation center to launch Operation Radd al-Nizam (Countering the Regime), citing the need to respond to continued regime violations on civilian targets. Interestingly, the signatories include Jaysh al-Ezza and First Coastal Division, both of which receive US support and fall under the COH terms. It is unclear whether they joined this group with US blessing or in violation of the near-obsessive US focus on the COH-based political track. If the former, that would indicate a US recognition that the COH track, depending as it does on meaningful regime compliance, was no longer a useful standalone strategy, and greater military pressure was required. If US-backed rebel groups are ‘defecting’ from the COH, then the United States will find itself trying to catch up to local military realities.

On April 19, Riyadh Hijab, head of the opposition’s Supreme Negotiations Committee and someone working closely with the United States in the negotiating process, said “There is no ceasefire on the ground.…We call on the fighters to not stop fighting Assad.” His first statement is an objective truth, his second a recognition that he could not as a high-profile opposition figure continue to hold to the COH fiction without undermining his own standing and legitimacy. It is worth noting that he did not say the ceasefire was void, indicating that the opposition would be willing to adhere to it if the regime adhered to it.

When the International Syria Support Group (ISSG) agreed to the COH, it was with the intention of providing “their strongest support to end the Syrian conflict and establish conditions for a successful Syrian-led political transition process.” However, as the violence increases, the COH is becoming a political window dressing, showing once again how disparate the international community’s perspective is from reality of the situation. Bringing these two in line requires that the ISSG review the terms of the COH and consider ways of revising it, enforcing it, or, if it is beyond repair, doing away with it and finding a solution that addresses the reality of the problem.

This crisis presents an opportunity to reevaluate the assumptions of the current Syria policy. Firstly, the COH and (initial) decrease in regime and Russian air attacks benefited the rebel signatories, and restrained the regime from capitalizing on its favorable military position. It also hurt ISIS by allowing its regime and rebel opponents to redirect their resources from fighting one another to fighting the jihadist group. The Nusra Front was also placed on the defensive, having been made irrelevant in the context of peace. Finally, it likely saved hundreds of innocent Syrian lives. All these outcomes served US interests. Unfortunately, it has proven impossible to sustain them, for the obvious reason that, predictably, the forces that stand to lose from the COH are willing and able to destroy it.

The Nusra Front helped unravel the COH in Aleppo, but only by capitalizing on relentless regime violations against civilians and rebel signatories to the agreement. The core of the problem remains, as ever, the regime’s unwillingness to make any meaningful political concessions in a negotiation process that requires the COH to hold. Its strategy has been two-fold: to transparently refuse any discussion of substantive political change; and to work to undermine the COH on the ground, improving its military position while making negotiations a welcome but empty distraction from local reality. In other words, the regime has continued its successful-enough strategy of the past five years.

US diplomats have invested almost exclusively in the COH and negotiations partly because US policy limited their other options. Yet at least some US officials also seemed to believe that, with Russia as a partner, the COH would enable meaningful negotiations between the regime and opposition. Without some form of military pressure on the regime, whether direct or by proxy, there is simply no way that will happen. Russia is either unwilling to force the regime to respect the COH and negotiate (seeing as the military situation does not compel it) or unable to do so. The policy implication is the same. A ceasefire agreement in which one side feels free to continue fighting, and which contains no mechanisms for enforcement and punishment, becomes a cover for business as usual in Syria.

Faysal Itani is a Senior Resident Fellow with the Atlantic Council’s Rafik Hariri Center for the Middle East. Hossam Abouzahr is the editor of SyriaSource.

Image: Photo: A ripped cover with the UNICEF logo is seen inside a damaged school that was run by UNICEF in the rebel-controlled area of Jobar, a suburb of Damascus, Syria March 2, 2016. REUTERS/Bassam Khabieh