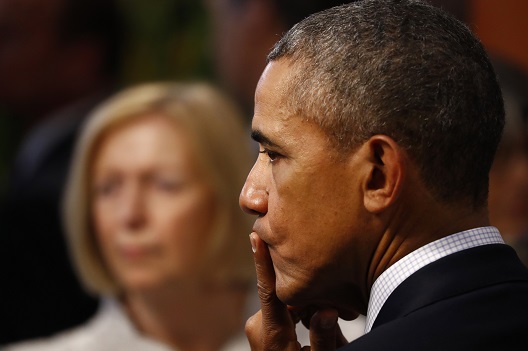 Ben Rhodes, President Barack Obama’s deputy national security advisor for strategic communications, is the subject of David Samuels’ piece in the New York Times Magazine: “The Aspiring Novelist Who Became Obama’s Foreign Policy Guru”. If Jeffrey Goldberg’s March 2016 on the “Obama doctrine” was not a sufficient foreign policy Rosetta Stone to decode an administration absolutely without precedent, the Samuels piece supplies the missing hieroglyphs. The Oval Office, it seems, circumvented the “American foreign policy establishment” (“the Blob”) to pursue a nuclear deal with Iran that “would create the space for America to disentangle itself from its established system of alliances with countries like Saudi Arabia, Egypt, Israel, and Turkey.”

The Samuels piece is not a hatchet job. It is a very sympathetic portrayal of a highly intelligent, disciplined, dedicated, and loyal official: someone who has faithfully and accurately channeled, transmitted, and explained the foreign policy desires of Barack Obama. The attitude of the author toward the subject makes the substance all the more extraordinary.

For those who believe that the bungled occupation of Iraq in 2003 sums up the past, present, and future of American behavior and capabilities in the Middle East, this article is cause for celebratory confirmation. For those who think that disaster in Iraq had specific causes and effects of its own (centering on the absence of stabilization planning) not universally applicable to all things at all times, this article will annoy. Regardless of the reactions it inspires, David Samuels and his subject deserve credit for explaining to the reading public what in the world has been going on for the past several years.

In terms of the administration’s public information rationale for that which it has done and failed to do in the Middle East, it really does all boil down to Iraq: a foreign policy catastrophe that, for Barack Obama and Ben Rhodes, sums up America abroad and typifies the handiwork of the American foreign policy establishment: “the Blob.” Per Samuels, “According to Rhodes, the Blob includes Hillary Clinton, Robert Gates, and other Iraq war promoters from both parties who now whine incessantly about the collapse of the American security order in Europe and the Middle East.” One could substitute the name “Trump” for “Rhodes” in the foregoing sentence without changing the meaning. Given the nature of campaign 2016 to date, Rhodes’ characterization of the presumptive Democratic Party candidate hardly quickens the pulse.

Indeed, the personal attacks do not matter. Leave aside the fact that neither Gates nor Clinton was on the ground floor of what passed for war planning in 2002 and 2003: the expectation of a splendid little campaign that would culminate with the capture of Baghdad; what one wit described at the time as “Grenada with Goats.” Leave aside that the Obama-Rhodes notion of the “Blob” probably includes the serving vice president and secretary of state in addition to at least one other former defense secretary (Leon Panetta) who served the Obama administration with great distinction. What is key here is the seeming belief that “Iraq 2003” epitomizes the sum total of what America stands for and what it brings to the table in the Middle East.

There is nothing at all remarkable about ‘John Q. Citizen’ looking back on invasion, occupation, and insurgency in Iraq and saying, in effect, “Don’t touch it with a ten-foot pole; let the natives have at it and sort it out on their own.” It is something else, however, for an official channeling the president of the United States to say, “I profoundly do not believe that the United States could make things better in Syria by being there. And we have an evidentiary record of what happens when we’re there—nearly a decade in Iraq.” This is the official alibi for not having protected, over the course of five years, one single Syrian civilian from the murderous assaults of Bashar al-Assad.

Yet the official alibi lacks one critical ingredient: the truth. A “decade in Iraq” did not dissuade the Obama administration from protecting Syrian Kurds from a massacre by the Islamic State (ISIS, ISIL, Daesh) in Kobani. Disaster in Iraq did not deter American military forces from protecting Yazidis in Iraq itself. The Iraqi fiasco has not stopped the Obama administration from establishing an anti-ISIS American military presence in both Iraq and Syria: yes, boots on the ground. No: the Rhodes-Obama fear and dismissal of making things better in Syria “by being there” applies only to those parts of Syria experiencing mass murder and massive displacement at the hands of Bashar al-Assad. Why? Iran.

For an American president and his principal subordinates to avert their gazes from mass homicide and from doing anything at all to mitigate or complicate it is far from unprecedented. In this day and age, however, knowing what we know about twentieth century failures to protect civilians thanks to the research and writings of Samantha Power and others, it is stunningly remarkable and regrettable. For a man of Barack Obama’s evident humanity and values, surely there has been something of transcendent importance that has stayed his hand from protecting Syrian civilians; something of paramount national security significance that has stopped him from acting in support of American friends and allies trying desperately to deal with the hemorrhage of humanity from Syria. Thanks to Ben Rhodes and his chronicler we know now what it has been: pursuit of a nuclear agreement with Assad’s premier long-term enabler and partner in mass murder: Iran.

The following passage from the Samuels piece clarifies why it was important for President Obama to protect no one in Syria, to risk his own reputation in the red-line climb down, and even to assure Iran’s Supreme Leader in writing that the Ayatollah’s murderous Syrian subordinate would not be touched by (anti-ISIS) American military intervention in Syria:

“By eliminating the fuss about Iran’s nuclear program, the administration hoped to eliminate a source of structural tension between the two countries, which would create the space for America to disentangle itself from its established system of alliances with countries like Saudi Arabia, Egypt, Israel, and Turkey. With one bold move, the administration would effectively begin the process of large-scale disentanglement from the Middle East.”

To complicate the ability of Iran’s man in Syria to commit war crimes and crimes against humanity would have placed at risk nuclear negotiations aimed ultimately at dissolving American relationships of trust and confidence with key regional powers. Yes, the Blob—the foreign policy establishment—would have had a problem with this. Hence an information operation headed by Rhodes aimed at avoiding head-on debates with the Blob or, for that matter, the representatives of the American people in Congress.

Were it not for their enormous suffering, millions of Syrian civilians might find humor in the reason for their abandonment: a desire by the American president to disentangle the United States from long-term cooperative regional relationships. Were it not for the tens of thousands of rockets and missiles pointed at them by Iran’s Lebanese militia, Israelis might enjoy the irony of it all. The only players in this drama who need neither humor nor irony to appreciate the importance and value of what is being undertaken are Iran and Russia.

President Obama and his assistant get high marks for, in the end, spelling it all out. They probably sincerely believe that Iraq 2003 sums up the wisdom and contribution of what they politely call “the foreign policy establishment.” The view here is that their successors will need thoughtful (if fallible) and experienced (if imperfect) foreign policy practitioners—yes, the thoroughly disrespected “Blob”—to undo the damage they have done.