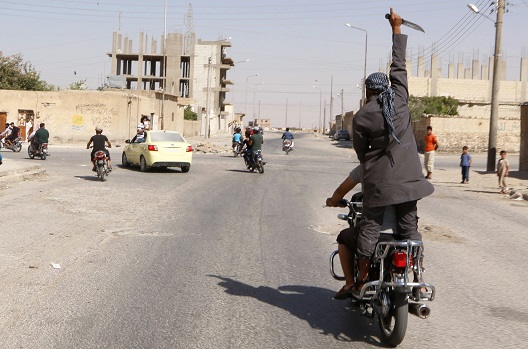 Ever since the Hollywood-style execution of US journalist James Foley, the Islamic State (ISIS) continues to surprise those that analyze the group with its criminal propaganda throughout the world. On close scrutiny, the Hollywood-style executions by the Islamic State are not just a way to humiliate and celebrate the pain of its enemies, but are the forefront of a mentality that targets local and international publics. To begin to understand and analyze these phenomena, we should revert back to the original source from which the Islamic State sprang.

ISIS was first known as the Islamic State of Iraq, an offshoot of the Jama’at al-Tawhid wal-Jihad, founded by Ahmad Fadeel al-Nazal al-Khalayleh, better known as Abu Musab al-Zarqawi, who at one point embodied the state of global jihad. To manage this new entity, al-Zarqawi relied on fatwas of Abu Abdullah al-Muhajir in his book The Jurisprudence of Blood and the theories of Abu Bakr Naji in his book The Management of Savagery, which are both considered key references taught within the Islamic State. At the time, Abu Musab al-Zarqawi’s policy fully supported the traditional policy of global jihad as articulated by al-Qaeda. However, his approach has focused on the ‘identity’ dimension of the conflict, by declaring Shiites to be infidels and prioritizing the fighting of “infidel” Arab regimes. Therefore, al-Zarqawi’s approach came to be seen as extremist, even in the eyes of global Salafi ideologues.

Zarqawi was the first to behead foreign hostages, since his beheading of Eugene Armstrong, an American hostage in Iraq, with a knife in a video published online by the Jama’at al-Tawhid wal-Jihad. Thus al-Zarqawi was a role model and example for the Islamic State’s leaders when they decided to adopt this terror-inducing policy aimed at sending messages to Western governments.

In the early days of its formation, when it was still a small group, the Islamic State had no more than forty members, and it focused its activities on missionary work, by promoting the version of Islam embraced by its members, trying to advise young people to join this small group, and urging them to return to its ‘abandoned obligations’ and jihad. After its rise, the Islamic State resorted to the tactic of kidnapping and assassination, in particular targeting prominent activists in Raqqa. ISIS kidnapped prominent figures, either killing or disappearing them to deliver a message to all its opponents: either remain silent about our practices or face a fate similar to your friends.

According to several sources, this series of public executions began in the Syrian city of Tabqa. At the time, the Islamic State was still known as the Islamic State in Iraq and the Levant, and a number of its members executed Dib Alliwi on March 17, 2013 on charges of spying and working as a regime agent. Thus, we see how the Islamic State relies on pretexts and justifications advanced by its members in the context of their hostility to the regime and of their alleged war against it.

Islamic State executions, then, should be understood as a means or tool—not an objective in and of itself—for terrorizing the public, regardless of the execution method.

In early 2014, the Islamic State was able to undermine the authorities of its local rivals and drive out militias operating in Raqqa, by confronting the Ahfad al-Rasul Brigade, bombing of the train station, and driving out the battalions of the Free Syrian Army (FSA), Ahrar al-Sham, and the Nusra Front. As the Islamic State extended its control over the region, it began applying the group’s main jurisprudential text, which is based on theories advanced in the book The Management of Savagery by Abu Bakr Naji.

Naji writes: “The great ‘power’ and that which causes the enemy to reflect one thousand times are a result of the ‘powers’ of the groups, whether they are groups of ‘vexation’ or groups of administration in the regions of savagery. The tie of religious loyalty between all of these groups is embodied in a covenant written in blood. The most important clause of this covenant is: “Blood for blood and destruction for destruction”. Attaining great ‘power’ makes the enemy unable to oppose it.” This passage explains how the Islamic State responds to any attack by treating it as an attack against a unified group and body.

This idea means, at the local level, that the Islamic State wants to show residents of the regions under its control that any opposition goes against the Islamic State as a political entity, not merely an individual or member. Executions are the Islamic State’s attempt to prove its existence as a state in the minds of locals by terrorizing them and applying punishments on their bodies, sending a message that nothing is sacred and everything is owned by the Islamic State. For this reason, the organization holds collective execution “celebrations” for violators or rogue elements in public squares, such as al-Naiim square in Raqqa and elsewhere. It has also crucified offenders, including children, as a spectacle aimed at people living under the organization. This also explains why sanctions such as flogging and hand amputations are imposed: as an application of Islamic State law on the bodies of its citizens.

Just as there was a coup and break with al-Qaeda’s policies on the operational and identity levels, the globalization of jihad experienced a similar fate. The Islamic State advances the methods to carry out and publicize executions, as we see in the work of Junaid Hussain, known as Abu Hussain al-Britani, the technological mastermind of the Islamic State, who was part of “Team Poison,” which claimed to have hacked around 1,400 accounts of businessmen, companies, international institutions, and humanitarian agencies around the world, and who was killed in a coalition air strike. Addressing youth, Hussain tweeted: “You can sit at home and play Call of Duty or you can come here and respond to the real call of duty… the choice is yours.” Islamic State videos are marked by technical proficiency and quality comparable to the latest movies. In addition, an English-speaking foreign jihadist carries out the executions, in order to direct messages to Western governments.

The videos clearly aim to terrorize and deter foreign governments and terrorize from fighting the Islamic State and terrorize their citizens, as demonstrated by the videos of journalist James Foley, British aid worker David Haines, and others. However, the use of these tactics carries the same message, i.e. that of transnational terrorism and pressure on governments, which seeks to encourage victims and their sympathizers to dissuade their countries from taking any steps against the Islamic State, in hopes of sparing the remaining hostages in the organization’s prisons. The Islamic State also benefits from harsh reactions of the target countries against foreigners, Muslims, and Islam. This rhetoric alienates foreigners in Europe and the United States and discourages their integration into Western countries, which the Islamic State exploits to attract new recruits—especially young ones—who feel alienated and isolated, and are thus captured by the Islamic State’s fantasy.

The Islamic State’s message directed to the Arab public differs from that addressed to the international public in one aspect. Following the formation of the international coalition against the Islamic State in August 2014, and particularly after the fall of Mosul, with its proximity to the Kurdistan region and Baghdad, US fighter jets began strikes in Iraq on 8 August to protect Erbil from falling into the hands of the Islamic State. Later, many Western and Arab countries joined the coalition, whether through direct participation or logistical support. On the morning of Wednesday December 24, 2014, a Jordanian fighter jet, piloted by Muath al-Kasasbeh, crashed, alleged by many to have been downed by the Islamic State. Al-Kasasbeh landed in the Euphrates River by parachute and was captured by the Islamic State.

Al-Kasasbeh’s identity as an Arab Muslim from a country fighting the Islamic State, gave the latter a new opportunity, so it invented a new method, different from previous executions, and prepared a video titled “Healing the Believers’ Chests.” The video shows al-Kasasbeh wearing an orange suit and talking about the countries participating in the military operations, the nature of these operations, and the weapons used. The symbols shown in the video are also important: al-Kasasbeh is kept in an iron cage set ablaze while he was still alive. The scene ends with the arrival of a bulldozer that throws soil over him, and the fire stops without showing any trace of his body. This unprecedented savagery delivers retaliatory and warning messages to the Arab and Muslim neighboring countries seeking to fight the Islamic State, with the group warning that punishment will be multiplied for Muslims and Arabs who dare to fight it.

The Islamic State’s criminal mentality did not stop here. The organization has proven keen to devise new methods to kill its captives. Its members have employed varied methods of execution, such as drowning, placing an explosive detonator around the neck of the victim, and throwing from high places, which is a method reserved for cases of homosexuality, in addition to the usual methods such as bullets to the head and beheading.

The latest ‘innovative execution’ took place in Raqqa, which has seen all types of death at the hands of the Islamic State and as well as from the international coalition air strikes. In recent pictures of an execution, the organization’s fighters, masked as usual, are shown holding the blindfolded victim, then one takes a knife and digs it coldly right in the middle of the heart, as if death were a medical operation by which the Islamic State cleanses its property: the people living under its control and Syrian viewers. As local and international forces continue to advance against ISIS, the group is likely to continue to assert its authority through public executions, to keep the local population under control.

Raqqa Is Being Slaughtered Silently is a campaign launched by a group of non-violent activists in Raqqa to shed light on the Assad regime’s and Islamic State’s atrocities. Follow them on their website raqqa-sl.com/en/, on Twitter @Raqqa_SL, and on Facebook at https://www.facebook.com/Raqqa.Sl

Image: Photo: A man holds up a knife as he rides on the back of a motorcycle touring the streets of Tabqa city with others in celebration after Islamic State militants took over Tabqa air base, in nearby Raqqa city August 24, 2014. Islamic State militants stormed the air base in northeast Syria on Sunday, capturing most of it from government forces after days of fighting over the strategic location, a witness and a monitoring group said. Fighting raged inside the walls of the Tabqa air base, the Syrian army's last foothold in an area otherwise controlled by IS, which has seized large areas of Syria and Iraq.