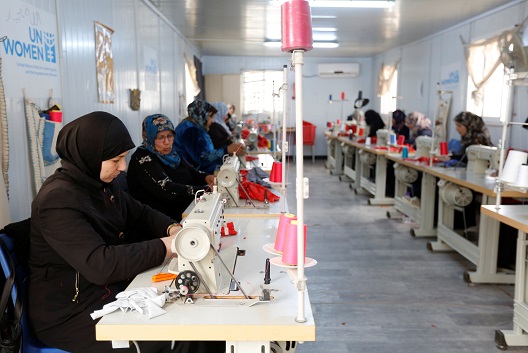 There are currently 656,000 Syrians registered with the UNHCR in Jordan, and the Jordanian government estimates the total number of Syrians in Jordan at 1.26 million. These estimates make Jordan one of the most refugee-dense host states per capita in the world.

As much as 13 percent of the Jordanian population is made up of Syrians. While the refugee crisis is putting extreme pressure on Jordan, many Western countries took steps to block refugees from seeking asylum there, as illustrated in several recent policies in the United States and Europe. As resettlement to a third country becomes increasingly less likely for refugees living in regional host states, the United Nations and Western countries turned to local integration as a means to serve refugees and the host countries. The goals of local integration are to address the immediate humanitarian crises, help stabilize the current host states, and reduce the incentive for refugees to seek asylum in third, usually Western, countries.

In February 2016, donor countries reached an unprecedented deal at the London Donors’ Conference. The deal, now known as the Jordan Compact, pledged over $1.8 billion USD to Jordan in grants and loans at concessionary rates, as well as favorable terms of trade with the EU, if Jordan provided 200,000 formal employment opportunities (in the form of work permits) and expanded education for Syrian refugees within its borders. The goal is to improve the welfare of Syrian refugees while developing the host economy, with benefits for native Jordanians as well.

Refugee host countries, particularly low and middle-income countries, typically do not grant refugees the right to work. Host countries fear competition over jobs with the local community and in countries with rising rates of already high unemployment. Until the Jordan Compact, Jordan was no exception. On average, the Jordanian government distributed only 3,000 work permits per year to Syrian refugees. Upon adopting the deal, King Abdullah II promised that for every one of the 200,000 work opportunities for Syrians, five would be created for Jordanians.  After the first year of the work permit initiative, revised initial goals of 200,000 work permits instead became 50,000 for 2016. This goal was not met. By the end of the year, the Jordanian government distributed just over 35,000 work permits.

The challenges Jordan experienced in implementing this first-of-its-kind initiative, providing refugees with the legal means to support their own livelihoods, and their implications, bear careful consideration as the West turns increasingly towards policies of local settlement and integration for refugees. Although before the Jordan Compact, Syrian refugees almost entirely worked in the informal sector. Formalization of informal workers did not take place at the pace or scale hoped for by humanitarian agencies, donor countries, and the Jordanian government itself. Issues of information dissemination, perceptions within the refugee community, and program targeting, all slowed the pace of the rollout for the work permit initiative. Nonetheless, the policy innovation of this program and the success of humanitarian agencies and the government in expanding work permit registrations as rapidly as they did following initial stumbles should be recognized and commended.

One key challenge for implementation of the program in March 2016 is confusion over policies and information dissemination. Tasked by the King with rapidly registering tens of thousands of Syrian refugees, who now fell under a different migrant worker category with unique policies, the Jordanian Ministry of Labor (MoL) struggled. MoL previously only registered an average of 3,000 Syrian work permits per year. The staff for Directorate of Labor experienced confusion across the country over health inspections, female migrant workers, and the exact stipulations of work permit eligibility. While information dissemination initiatives continued including humanitarian meetings, and workshops with MoL stakeholders and staff, policy confusion remains, particularly over renewal of work permits as the first begin to expire this year.

Another persistent issue is the perceptions within the refugee community about the costs and benefits of accessing a work permit. Many refugees fear loss of aid by formalizing work arrangements and registering income with the government and humanitarian agencies. Others do not perceive the benefits of the work permit to outweigh those of continuing to work informally, especially as wages are often higher in the informal sector, and work arrangements can be more flexible. Anecdotal evidence from the field also suggests that some Syrian refugees fear that work permits will actually decrease their ability to register complaints of employer abuse or renegotiate their contracts, as formalization ties them to a single employer and contract legally for the yearlong duration of the permit.

A final consideration is the approach to register different types of Syrian refugee workers. While initial efforts focused on registering refugees working informally, but regularly (with a single employer, regular hours, often even with an employment contract) with work permits, data on Jordan’s informal labor markets suggest that most informal work arrangements are more difficult to formalize. Syrian refugees work for more than one employer in temporary or flexible arrangements, many sectors, or informal businesses.

Efforts to formalize this population of refugee workers—estimated as the majority of Syrian refugees— requires initiatives to formalize and foster small and medium-sized enterprises and home-based businesses. Additionally, it is required for policy revisions to register refugees in atypical arrangements that do not meet the eligibility requirements of the work permit. For instance, a joint program between the International Labor Organization and the Jordanian MoL to register agricultural workers through cooperatives in the north led to a significant increase in agricultural worker registrations. Creative arrangements such as these allow more informal Syrian refugee workers to avail themselves of the benefits and protections of a work permit.

Another group, not widely registered is adult refugees who can work but do not, a group that is largely made up of female refugees. This group requires more than just formalization of informal businesses and policy shifts to encourage formalization of work. Formalization of home-based businesses is particularly important for female refugee to access work. They also require supportive infrastructure and shifts in cultural attitudes to facilitate access to formal work. Infrastructure like child and elder care, healthcare, education, and community centers are important. Vocational training and job matching programs can help to enable environments and encourage non-working adults to join the labor market.

Yet it remains clear that work permits alone cannot provide a sustainable means of supporting a family’s livelihood. More supportive economic infrastructure and targeted programming is necessary to realize the benefits of a formalized workforce. While the Jordan Compact agreement demonstrates that relative poverty is not the only feature that warrants international support, donors can do more to help Jordan meet the challenge of hosting a long-term, largely urban-based population of refugees. Meeting funding commitments and ensuring there is appropriate economic and technical support can help Jordan meet its promises to support refugees. Only 63 percent of UNHCR’s funding appeal for 2016 was met by donors, and only 45 percent of funds from the Jordan Compact have been dispersed thus far.

Given current levels of poverty within the Syrian refugee population as well as vulnerable host communities in Jordan, supporting livelihoods will be a years-long process and humanitarian initiatives themselves should pivot to these longer timelines.

Denis Sullivan is a professor of political science and international affairs at Northeastern University and is the founding Director of BCARS, the Boston Consortium for Arab Region Studies. His research focuses on political economy, civil society in the Arab region, the politics of foreign aid, and the Syrian refugee crisis.

To learn more about the work permit initiative for Syrian refugees in Jordan, see the joint research project of the Boston Consortium for Arab Region Studies and the UN High Commissioner for Refugees in Jordan, available online here.

Image: Photo: Syrian women working in a sewing workshop in the U.N. women center at Al Zaatari camp in Jordan, near the border with Syria, November 30, 2016. REUTERS/Muhammad Hamed