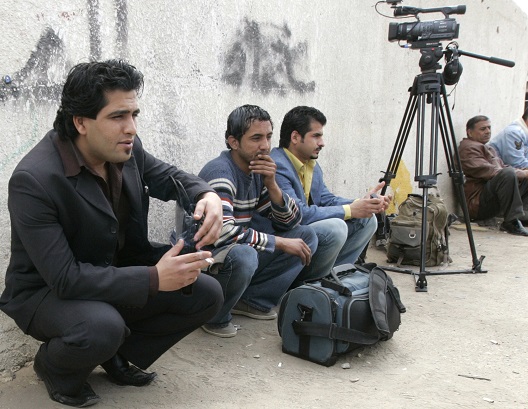 It is difficult to find a single professional Kurdish media outlet operating in Iraqi Kurdistan and Kurdish-controlled parts of Syria, or what in Kurdish is called Rojava. The situations in Iraq under Saddam Hussein and Syria under the Baathist regime led to a lack of independent media and institutions to nurture Kurdish media and language. In Syria, this led to Kurdish parties filling in the gaps left by absent ministries of culture and information. Kurdish parties—which have been banned in Syria since the establishment of the first one in 1957—secretly have published Kurdish newspapers and magazines both in Syria and abroad.

In Iraqi Kurdistan, there are dozens of newspapers, news agencies, satellite news channels and local channels, but they all operate according to the ideology of the Kurdish parties with which they are affiliated. These include, for example, the Kurdistan Democratic Party, based in Erbil, the capital of the Kurdistan region, and the Patriotic Union of Kurdistan, led by former Iraqi President Jalal Talabani in Sulaymaniyah. Additionally, there are news agencies and satellite channels affiliated with other parties but, due to alliances with Erbil or Sulaymaniyah, they are often biased in favor of one or the other of these parties.

Although the number of media outlets in Iraqi Kurdistan is greater than in the Syrian Kurdish regions, most owners of these media outlets have no relation to the press or the media. Instead, they obtained their operating permits because of their connections to the ruling authorities in Kurdistan. The situation is similar in Rojava, though the number of Kurdish media outlets is much smaller than in Iraqi Kurdistan. For example, Masrour Barzani refuses to acknowledge his ownership of the satellite channel Kurdistan24, despite the channel’s editorial policy being biased towards the Kurdistan Democratic Party, headed by his father, President Masoud Barzani. The channel defines itself as independent, though most journalist circles in Kurdistan deny this.

Kurdish media are reasonably professional in Iraqi Kurdistan, especially because the Kurdistan Regional Government (KRG) expanded the scope of the media after the 2003 U.S. invasion, and sent a number of residents abroad for specialized study. Syrian media —and not just in the Kurdish regions—was repressed for many decades, representing the voice of only one party: the Arab Socialist Baath Party. This is one reason that so few Kurdish professionals emerged in the media, though it should be noted that a number have proven themselves outside of Syria and, since the beginning of the popular protests, even in the Kurdish regions of Syria itself. In Kurdish media outlets and in their reporting from the front lines of the confrontation between ISIS and Kurdish fighters, women have become key partners alongside men. Some have even gone beyond being partners: in Amuda, Syria, the first Kurdish women’s community radio station was recently established.

Despite many attempts by Kurdish journalists in Rojava to establish impartial media organizations independent from party agendas, all outlets are under financial pressure. Such pressures have caused many of these organizations to discontinue their work, for example the website Welati Net, which followed current events in the Kurdish regions of Syria. The same applies to Kurdish journalist unions, which are often, in one way or another, politicized or affiliated with a Kurdish party. For example, the Kurdish Journalists Syndicate in Syria, formed in Erbil, is aligned with the Iraqi Kurdistan Democratic Party and the Syrian Kurdish National Council. On the other hand, the Democratic Union Party, whose influence extends over Rojava, had the same idea, founding the Union of Free Media in the Kurdish areas.

Although Iraqi Kurdistan and Kurdish territories of Syria are relatively safe spaces for various Kurdish and Arabic media outlets journalists, there are encroachments against them. For example, in areas controlled by the Democratic Union Party in the Kurdish regions of Syria, journalists authorities subject media workers to surveillance and arrest them because of their opinions or coverage. Furthermore, self-government authorities have banned various media outlets from working in areas under their control. Correspondents from the satellite channels Rûdaw and Orient News’s Kurdish service have been banned from working in Kobanî. Iraqi Kurdistan has also witnessed a decline in freedom of the press “because of the continued targeting of journalists critical of corruption in the region,” according to statements by parliamentary representatives in Iraqi Kurdistan.

It is no secret to those that follow media affairs that the lack of professionalism in Kurdish media is mainly due to the dominance of a political mentality. They are mouthpieces for whatever party is funding them, often a political party. If not a political party, they are funded by those close to one Kurdish party or another, who use media as a tool to boost the image of their parties as well as, in some cases, to cover up their corruption.

In practice, it is possible for a media outlet to be funded by a political party and be professional at the same time. Furthermore, because of the Kurds’ lack of a national state and cultural institutions and ministries, we cannot blame the Kurdish media for seeking party funding. Kurdish parties act as a proxy for these institutions. From another perspective, the lack of a single party dominating the Kurdish regions creates a form of competition that leads to freedom of a sort and an acceptance of difference and political pluralism, In contrast, the Syrian Baath Party, suppressed any critical media, supported loyal media outlets, and was not interested in developing professionalism in the media.

Kurdish media outlets are taking advantage of the latest European technologies for print and broadcast media; however, they mimic Arabic, Turkish, and even Persian language media in terms of editorial policy. This is the case with the program 2Ali, which broadcasts on Rûdaw out of Erbil and is considered a Kurdish version of the famous al-Jazeera program, The Opposite Direction (al-Itijah al-Mu’akis).

The paradox of Kurdish media is that all the necessary ingredients for the emergence of a professional media are present, but the narrow partisan mentality hampers efforts towards professionalization. This lowers the level of professionalism, forcing these enormous talents into the service of specific ideologies. Thus, the problem is not simply in the party funding but also in the partisan mentality that accompanies the funding. To professionalize and take on independent media’s watch dog role, Kurdish media has to rid itself of its partisan complex.

Jiwan Soz is a Syrian Kurdish reporter who has written for several newspapers and agencies, including al-Quds al-Arabi and al-Jazeera.

Image: Photo: Journalists sit outside a conference hall while waiting for a news conference in Baghdad February 23, 2009. A boom in local media since the U.S.-led invasion in 2003 has given Iraqis a choice between some 200 print outlets, 60 radio stations and 30 TV channels in Arabic, Turkmen, Syriac and two Kurdish dialects. Yet most media outlets remain dominated by sectarian and party patrons who use them for their own ends, and have yet to become commercially sustainable enterprises let alone watchdogs keeping government under scrutiny, the favoured Western model. Picture taken February 23, 2009. REUTERS/Mohammed Ameen