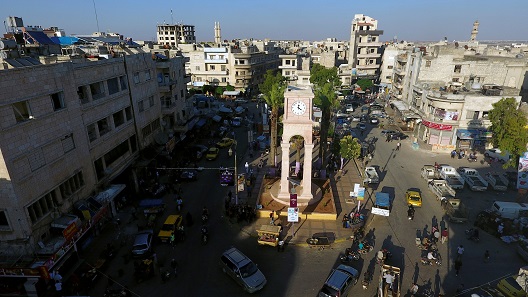 On August 21, 2018 the United States, France, and the United Kingdom issued a statement to commemorate the fifth anniversary of the Assad regime’s deadly chemical attack on civilians in the rebel-held Ghouta suburb of Damascus. According to the three powers, “we will respond appropriately to any further use of chemical weapons by the Syrian regime, which has had such devastating humanitarian consequences for the Syria people.” The unintended but inevitable message to Assad is clear: As your campaign of state terror and mass homicide moves to densely populated areas of northwestern Syria, we will limit ourselves to rhetorical outrage and finger-shaking provided you avoid the use of illegal chemicals.
No doubt the fifth anniversary of one of Assad’s more gruesome atrocities was worth noting. No doubt there is profound revulsion and legal sanction attached specifically to the use of chemical weapons, something particularly noteworthy as the centennial of the armistice ending the Great War approaches. No doubt Assad has a strong affection for the special terror-inducing qualities of nerve agents. But officials drafting statements of this type should avert gazing into the mirror long enough to consider how their words will be read by Assad, and what the unintended but deadly consequences might be.

Chemical weapons used by the Assad regime have, in fact, had “devastating humanitarian consequences” for a small handful of Syrians relative to those killed, maimed, and terrorized by the regime’s non-chemical munitions. Fewer than one percent of civilians killed by the Assad regime have been victimized by the chemical murder weapon. Artillery, conventional airstrikes, barrel bombs, rockets, missiles, mortars, tank rounds, machine guns, rifles, pistols, and knives account for the 99 percent, minus people tortured, starved, or denied urgent medical care while in detention or under siege. Yes: chemicals are specifically banned. But is there any doubt as to the full and multifaceted portfolio of Assad regime war crimes and crimes against humanity?

The statement’s clear implication, however, is that everything thrown at civilians by a murderous regime in Idlib will not provoke a retaliatory, protective military response so long as the assault is not chemical in nature. “Furthermore, the United States, the United Kingdom, and France are gravely concerned over reports of a military offensive by the Syrian regime against civilians and civilian infrastructure in Idlib, and the resulting humanitarian consequences . . . [And] we remain resolved to act if the Assad regime uses chemical weapons again.” We have seen the security and humanitarian consequences of “grave concern” over mass murder for more than seven years. And still, “resolved to act” is limited to the use of one specific murder weapon.

As the regime now considers the extent to which Idlib Province and its capital city will get the Aleppo and Eastern Ghouta treatment in terms of deliberately targeting hospitals, homes, schools, mosques, and marketplaces, a person of Bashar al-Assad’s bottomless cynicism will see the August 21, 2018 statement as a green light to do his worst to a population swollen with the displaced, so long as he refrains from using chemicals. Is it remotely possible that those who drafted the statement and authorized its release were unaware of how Assad, his entourage, and his Russian and Iranian supporters would process it?

Perhaps the statement was consciously intended to limit the liability of the West to protect civilians in case Assad goes “full Aleppo” (or beyond) in Idlib. Chemicals aside, the Trump administration is a model of foreign policy continuity when it comes to ignoring the policy and humanitarian implications of civilian-centric warfare in Syria. This was demonstrated in southwestern Syria very recently, as an American agreement to maintain a de-escalation zone was shredded by the regime, Russia, and Iran.

President Obama—eager not to offend Iran—claimed that lifting a finger to protect Syrian civilians would send the United States sliding down the slippery slope of Iraq-style invasion and occupation. President Trump has publicly signaled his desire to put Syria and its problems in his rear-view mirror: something Iran, Russia, and the regime count on. Given this history, and notwithstanding American military responses to regime chemical attacks in 2017 and 2018, Assad—banking on Western weakness—may not even be deterred by the new chemical warning. He already believes, after all, that weaponized chlorine gas is fully permissible.

There is nothing wrong and everything right with Western allies taking a principled stand against chemical warfare. President Obama did so but bluffed, and the bluff was called: with disastrous credibility and security consequences, far transcending Syria. President Trump has demonstrated twice he will not bluff on Assad regime chemical use. Yet he may well be tested again by a party whose contempt for the West is experience-based and absolute.

Yet passing the no-bluff test on chemicals will not be enough. As matters now stand a sarin gas attack killing twenty people may draw a military response, but the balance of the regime arsenal killing 20,000 and sending 200,000 fleeing for their lives would not. This is defensible neither on practical nor moral grounds. Better for the Western allies (ideally including Turkey, which stands to suffer greatly from Assad’s state terror in Idlib) to warn Moscow that the days of Assad impunity in slaughtering and terrorizing civilians are over, and that devasting military responses on high-value regime targets will be forthcoming if another abomination begins to unfold with or without chemicals. This too must not be a bluff.

Absent such a message, how would Assad not view the August 21, 2018 statement as a green light to do his non-chemical worst to civilians in Idlib Province? Presumably this is not the intent of the authors. But it may join a long list of disastrous, unintended consequences of bad thinking and careless rhetoric, one wreaking havoc on innocent civilians and piling even more discredit on the ruined reputation of the West in Syria.

Ambassador Fred Hof is Bard College’s Diplomat in Residence and a nonresident senior fellow of the Hariri Center.