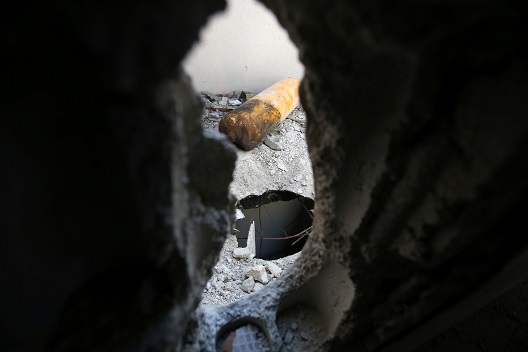 In northwest Syria a small, but growing collection of private firms are working to implement technology solutions to counteract the worst effects of an aggressive disinformation campaign which threatens the relative peace that currently prevails there.

On November 25, 2018, an alleged chemical attack occurred in regime-controlled areas of Aleppo, prompting Russian airstrikes against targets in the nearby towns of al-Rashdeen and Khan Tuman. The regime justified the attacks as retaliation against the rebel groups they claim perpetrated the chemical attack. Since this exchange occurred, a declassified US assessment of the attack states the initial chemical attack was perpetrated by pro-regime forces and most likely consisted of tear gas, not chlorine. The report suggests the attack was staged in order to undermine faith in the current ceasefire and prompt a new military offensive against opposition-held areas of Idlib and the surrounding governorates.

This is nothing new. Prior to the Sochi Agreement, both Russia and the Syrian regime indicated they had evidence of a false-flag chemical attack in the vicinity of Jisr ash-Shugur, prompting concerns that the statement was tantamount to a preemptive dismissal of the regime’s intent to use chemical weapons in the near future.

Regardless of belief or bias, the very existence of competing claims such as these demonstrates that at least one party believes they can get away with committing a war crime while dodging retribution.

To date, technology only seems to have aided undermining the truth. By its nature, social media is more conducive to the spread of disinformation than truth and Russia and the Syrian regime have successfully weaponized social media platforms.

A small number of companies are fighting back. They use emerging technologies including sensors, drones, cubesats, blockchain, and mobile applications to gather information about the war in Syria from multiple independent sources in order to preserve a verifiable record of violence and evidence regarding war crimes.

A few of these companies are discussed here:

TruePic provides a rapid and straightforward method for assuring the authenticity of images taken inside Syria. The technology is used within Syria to document the effects of the conflict on civilians. The Syrian American Medical Society (SAMS) uses TruePic to record visual evidence of injured civilians. In addition, citizen journalists in Syria are actively using TruePic today as a grassroots response to state-sponsored media outlets.

By affirming the timestamp and source of images, TruePic’s service directly addresses the practice of casting doubt on the veracity of incriminating images. In the aftermath of the April 7, 2018 chemical attack on Douma in Eastern Ghouta, a photo emerged of an empty chlorine canister in the area of the attack. Supporters of the regime claimed the photo was staged in the face of evidence to the contrary. As the quality of fabricated photographic evidence improves, the ability to trust sources of images will only become more important.

Planet is a company using low-cost cubesats and low-cost launch providers like SpaceX to dramatically reduce the cost of high-resolution, high-revisit satellite imagery. This technology clearly has numerous applications, among which is the ability to to rapidly document potential human rights abuses in areas where investigators cannot easily reach. Planet partnered with Human Rights Watch to examine areas where atrocities are alleged to have occurred.

On October 26, 2016, witnesses reported that an airstrike by an SU-24 destroyed a school complex in Haas, Idlib. According to these reports, dozens died in the attack, including many schoolchildren. Human Rights Watch used satellite imagery taken before and after the time of the attack, to confirm the destruction of the school and to corroborate videos of the attack taken as it happened. These videos, taken by local journalist organizations, show key landmarks, which also appear in the satellite imagery.

Hala Systems uses reports of combat aircraft overflights to warn civilians about impending airstrikes. Hala’s platform, Sentry Syria, uses data from human observers, sensors, and social media to predict threatened areas and then push warnings over Telegram, Facebook, radio, and air raid sirens. While the idea of civil air defense is not new, integrating the network of human observers into an end-to-end system allows for better coordination, and preserves a record of the air war as it happens.

It is this record that can be used to combat disinformation. An account of an airstrike from multiple independent sources is more readily verified than information from a single source. Hala uses this observation data to corroborate reports of airstrikes on social media by using natural language processing and machine learning to identify relevant posts. Hala’s data has been used as a source by media, governments, and the United Nations to both confirm and rule out details about airstrikes in Syria.

To date, Sentry Syria Hala provided corroborating evidence on the April 4, 2017 chemical attack on Khan Sheikhoun, Idlib; the November 13, 2018 airstrike on a crowded market in Atarib, Aleppo; the April 7, 2018 Chemical attack in Douma; and many others.

Blockchain technology is important to much of this work. While the hype around blockchain has caused the potential of this innovation to be overstated, its core value proposition—a means of establishing trust—ensures that once a datapoint of any kind has been written to the blockchain, it cannot be modified and the time it was logged cannot be questioned. This makes it difficult to falsify information after the fact. TruePic uses blockchain natively, and Hala Systems has worked with ConsenSys to integrate blockchain into its data pipeline to ensure aircraft tracks can be used as evidence for attributing war crimes.

Individually these accomplishments are useful. Taken together they have the potential to be revolutionary. Each of the technologies mentioned here, provides something that the others lack. A composite view using multiple sources yields a more complete picture than each taken separately.

On March 11, 2018, doctors in Eastern Ghouta reported treating symptoms of chlorine exposure. A witness recorded the treatment at 16:02 in the town of Arbin using TruePic’s app. Prior to that day, Hala Systems’ observers recorded a Hip-8 helicopter inbound to Arbin, followed by local media reports that a chlorine attack had occurred.

On November 13, 2017, multiple airstrikes struck a crowded market in Atarib, killing sixty-nine civilians. Bellingcat and the Syrian Archive collaboratively conducted an open source investigation on the attack, using a combination of video and photos taken from social media and the news; satellite imagery; and observer data to piece together the timeline leading up to the attack and its aftermath. The evidence gathered was sufficient for UN investigators to attribute the attack to Russian aircraft.

All of this is very impressive, but there is a key caveat: These are not new and only shadows of their modern defense industry brethren. State actors are often aware of all the information these provide, often in greater detail, but choose not to disclose because of classification concerns.

The importance of these technologies does not lie in their novelty, but in how they democratize the information and lay it out for the world to see. Knowledge is not the final goal behind all this effort; action is. As it becomes easier for citizens to hold leaders accountable with data, inaction becomes harder to justify.

Dan Henebery is the Director of Analytics at Hala Systems. He is formerly an officer in the US Army and a senior data scientist at Deloitte Consulting. Follow them @halasystems.

Image: Photo: A damaged house where Organisation for the Prohibition of Chemical Weapons (OPCW) inspectors are belived to have visited are seen during a media tour in Douma near Damascus, Syria April 23, 2018. REUTERS/Ali Hashisho