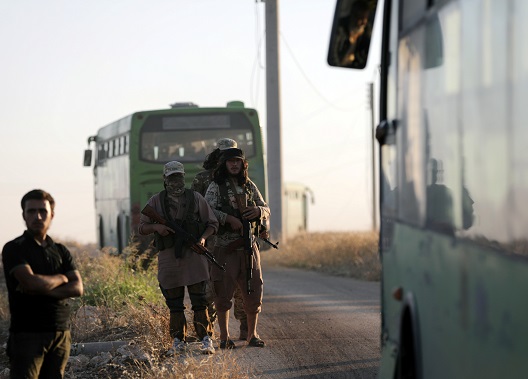 While the Trump administration’s flip-flops on Syria and the looming withdrawal of US personnel from the country’s northeast have rightly drawn a great deal of public attention, important developments have simultaneously unfolded without much notice in the northwest. Specifically, while all eyes have been on the territories held by the Kurds and their allies to the east, the Salafist Hay’at Tahrir al-Sham (HTS) militia has seized control of Idlib province and the adjacent opposition-held portions of western Aleppo and northern Hama, routing the Turkish-backed National Liberation Front (NLF). In short, the moderate opposition has collapsed on the ground inside Syria, except in areas directly controlled by Turkey. HTS and its affiliated “Salvation Government” are now in charge. Hard-line jihadists have won the northwest and the consequences could be dire.

The most obvious consequence of the HTS takeover is that it imperils the ceasefire agreement signed by Turkey and Russia last September in Sochi. Under that agreement, Turkey committed to removing heavy weapons from areas adjacent to regime lines and to reining in HTS. In turn, Russia agreed to restrain the Assad regime from launching an assault on Idlib. Despite periodic provocations, the agreement has brought a measure of calm to the northwest, even as internally displaced people (IDPs) have streamed into the area from former opposition enclaves in rural Damascus, Daraa and Homs. HTS ascendancy puts that fragile calm at risk.

It seems unlikely that the regime and its allies will turn a blind eye to HTS control of the northwest for long. Consultations between Moscow and Ankara are ongoing and the next few days could reveal the likely course of events. Both have agreed that HTS needs to be pushed back, but details are scant. The best case may be that Turkey intervenes directly in Idlib to put down the radicals and to secure its buffer zone. Another unsavory possibility may see Turkey reaching an accommodation with HTS and defending the current ceasefire lines, putting Turkey and Russia at increased risk of a direct confrontation. In the worst case, the regime and its allies would discard the ceasefire agreement and launch a full scale assault on Idlib and adjacent territory. Given the hundreds of thousands of IDPs from all over Syria concentrated in Idlib, including armed actors relocated from former opposition enclaves, a regime offensive would result in massive casualties and a new wave of refugees fleeing to Turkey and Europe.

The HTS victory also marks the final end of the revolution inside Syria, insomuch as the original revolutionaries were seeking a democratic transformation within a secular unitary state. Now, all Syrian territory outside regime control is either occupied by Turkey, controlled by the separatist YPG and its allies, or controlled by radical jihadis—principally HTS, although some territory remains in the hands of the Islamic State (ISIS). In the northwest, recent reports indicate that HTS is moving against activists associated with other factions, and especially targeting officials of the National Coalition-affiliated Syrian Interim Government (SIG).

The HTS victory raises a number of uncomfortable questions for Western policy-makers.

Should the United States and Europeans make an effort to reverse HTS gains, and if so how? They could resume support to moderate armed actors, essentially reversing the policy decisions to walk away from the northwest. It is entirely possible that the termination of security sector support in the northwest, which took final effect in 2018, contributed to the HTS takeover. Even if aid were to resume, there is no certainty that moderate armed actors would prevail. Further, relations between Turkey and the West are sufficiently poisoned that Turkey, which controls access to the northwest, may not even allow Western assistance to flow.

Is the internationally-recognized moderate Syrian opposition still relevant? When the moderate opposition controlled territory, its seat at the negotiating table made some sense. Now, it lacks any ability to influence events on the ground. Peace talks may still bear fruit, but they will be between international actors, with little meaningful input from non-regime Syrians.

The only potential silver lining in an otherwise very grim picture may be that the HTS debacle could represent an opportunity for the United States and Turkey to mend fences and perhaps develop a coordinated response to stabilize the northwest anew. The United States and Turkey share a common interest in seeing HTS eradicated or at least contained. It is hard to say, however, whether this is even possible given that US policy towards Syria seems to change by the week, and Turkey has shown very little confidence in US initiatives to date.

Phillip James Walker, Esq. is an international lawyer and stabilization consultant. He was until recently Senior Justice Adviser of a multilateral effort to support security and justice services in northwestern Syria. Contact him at www.phillipjameswalker.com for more information.

Image: Islamist rebels from Hayat Tahrir al-Sham are seen near buses outside the villages of al-Foua and Kefraya, Syria July 18, 2018. REUTERS/Khalil Ashawi