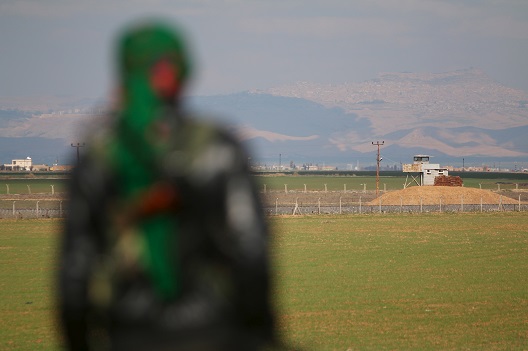 As the Syrian crisis enters what could be its final phase and the battle between the regime and the opposition appears to have frozen, discussion is growing around options for a political solution for the country, different parts of which are controlled by disparate forces. A federal regime, as proposed by Russia and welcomed by the Kurds, appears to be the model most likely to be adopted, despite objections from both the regime and the opposition.

On the ground, Syria has effectively been partitioned into multiple regions. The Kurds in the north have independently declared their own “federal” regime in areas under their forces’ control. The people of Suwaida, who belong to the Druze minority, have demanded a similar form of government in the south of Syria, while the whole of Idlib is under opposition control and the regime controls the west and center of the country.

During recent peace talks in Geneva, a source in the opposition delegation revealed that Russia had proposed a federal solution for the Syrian conflict. According to the source, Russia sees federalism as a way of keeping the Assad regime in control, at least, of Alawite-majority areas including the Tartous military port, which is of major strategic importance to Moscow.

The source also said the proposal had been endorsed by the United States and other western parties, who see federalism as the only realistic scenario for preventing Syria’s partition into multiple entities controlled by armed groups with conflicting ideologies.

Those who are optimistic about this solution, primarily the Kurds, say it would be difficult for a central government to govern the country given the multitude of disparate groups governing different regions. They argue that in a federal regime, security could be rapidly restored and the sectarian and ethnic problems that have been drowning the country for years could be brought to an end. They say it would be the model most likely to avoid the return of a dictatorial regime.

Serdar Khalil, a Kurdish media activist, points out that a recent deal reached between Russia and the United States on non-escalation zones stipulates that no party attempts to gain new territory, effectively meaning that current frontiers between different actors will remain in place. The current map of control in Syria is therefore likely to be a major factor in any formulation for resolving the conflict.

Khalil says the depth of hatred that has accumulated between the different parties after years of war makes it impossible to revive any semblance of national fabric.

He argues that federalism is the best system, incorporating different ethnicities and warring parties who could fear control by a particular faction over the reins of power. Further, he says the option of decentralized rule is the best way of keeping Syria together as a state.

That solution has been broadly supported by religious and ethnic minorities, but it has been rejected by neighboring states, particularly Turkey, which fears a repeat of the experience of the Kurds in Iraq and Syria, where Kurds have gained self-government, threatening Turkey’s security.

On the other hand, some believe that the idea of federalism in a situation like that of Syria or Libya is entirely different from its application in a developed state such as the United States or Canada. They cite a simple reason: if a federal system was created in Syria, it would clearly be implemented on religious and ethnic lines, not on the basis that should underpin such a regime, namely full citizenship and freedom, legally and culturally, with freedom of geographical movement and social mobility.

Those who reject federalism in Syria see Libya as a clear example of how such a system can fail, giving rise to multiple, feuding governments, each supported by foreign powers and taking conflicting decisions.

The problem with federalism in Syria lies in the fact that the map would be drawn out according to current ceasefire lines: that is to say, frontiers Syrians fear would be much the same as those drawn by warring parties to partition the country under the Sykes-Picot deal of 1916 which reshaped the Middle East.

Legal expert Arwa al-Sousi points out several ways in which Syria could be negatively impacted by such a system. Firstly, it would fragment the country and prolong the conflict, especially if foreign powers continued supporting the authorities of each region instead of the federal authorities, as the United States for example supports the Kurds, Turkey backs rebel groups and Russia props up the Assad regime.

On top of that, al-Sousi points out that the population will find it difficult to implement and understand such a regime after decades of life under a centralized, dictatorial authority. That could weaken its institutions and lead to contradictory legislation and work mechanisms.

The lawyer concludes that ethnic and religious differences in Syria could be managed under a system of provincial administrations enjoying extensive powers, with respect for the principle of justice by central authorities, rather than an immediate move to a federal system.

Given the political situation in Syria and how the Assad regime has clung to power for over fifty years using a strong security apparatus to bolster its rule, some believe it is impossible for Syria to be successfully partitioned into federal states. Each component would attempt to take exclusive control of its own decisions and would show little respect to the central government, with each state drawing strength from its sectarian and ethnic makeup.

As for the situation in the wider region and the extent to which neighboring states would support such a project, the likely independence of Iraqi Kurdistan at the end of the year and the mobilization of troops along Turkey’s southern border with Syrian Kurdistan are foreboding signs that such a project could prolong the war well into the future.

The issue of how to distribute the country’s wealth across all the states is another problem. Syria’s key agricultural and oil resources are concentrated in the north and east, while Assad loyalists control Syria’s main ports, meaning it would be necessary to reach a solid deal on how to share the country’s wealth before such a project could be adopted.

In conclusion, it can be said that any future political system in Syria will be hard to put in place unless Syrians themselves can agree on a new regime that guarantees all sides justice and a role in governing the country. Any system of government and leadership that is imposed from outside will prolong the civil war for many years; indeed, for as long Syrians do not receive the justice they rose up and demanded in 2011, and for which they have now paid the price of the destruction of their country, and thousands of dead, wounded and crippled.

Image: Photo: A Kurdish member of the Self-Defense Forces stands near the Syrian-Turkish border in the Syrian city of al-Derbasiyah during a protest against the operations launched in Turkey by government security forces against the Kurds, February 9, 2016. REUTERS/Rodi Said