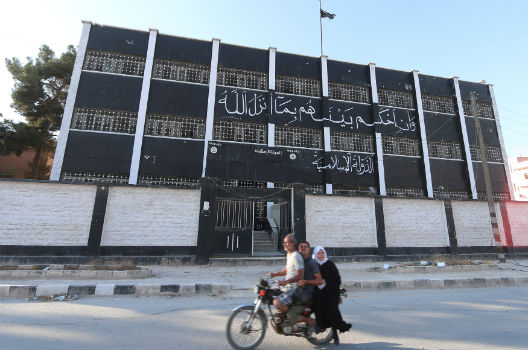 The Dar al-Qada (‘Abode of Judges’) serves as the de facto judicial branch of Jabhat Fatah al-Sham (previously known as Jabhat al-Nusra, Syria’s official al-Qa’ida wing), whatever claims might be made of its supposed independence. Though the Dar al-Qada operates in certain areas where it enjoys wider backing (e.g. Hureitan in north Aleppo countryside), it primarily exists in strongholds of Jabhat Fatah al-Sham like Salqin in north Idlib countryside, which is the branch that issued the statement under consideration here.

This statement from the Dar al-Qada in Salqin that I have obtained was distributed recently (around two weeks ago) in the villages of Jabal al-Summaq, which, as I have documented previously, is an originally Druze area whose inhabitants have been forced to declare conversion to Sunni Islam twice, first under pressure from the Islamic State in Iraq and al-Sham (ISIS) in late 2013 and then under Jabhat al-Nusra at the beginning of 2015.

The latest statement follows on from administrative decisions by the Jabhat Fatah al-Sham amir for Jabal al-Summaq– al-Hajj Baha’ al-Sharm- to prevent those living in regime-held areas from benefiting from renting out their properties in Jabal al-Summaq, while those in the army or regime’s security apparatus are barred entirely from their homes, unless they abandon their affiliation and return. These decisions have also been applied to agricultural lands in the area.

In short, the new statement as distributed for the original inhabitants of Jabal al-Summaq is intended to ensure that they ratify and organize all contracts of buying and selling of residential and agricultural property through the Dar al-Qada in Salqin, which appears to be the nearest functioning Jabhat Fatah al-Sham judicial body for the Jabal al-Summaq area. Note the language of the statement in speaking of “newly Muslim sects like what was known as the Druze,” referring to the conversion of the Druze in Jabal al-Summaq to Sunni Islam. This illustrates the continuity in policy towards the people of Jabal al-Summaq, in that the imposition of Sunni Islam remains in place despite the rebranding from Jabhat al-Nusra to Jabhat Fatah al-Sham.

There is of course also a degree of discrimination here in that the inhabitants of Jabal al-Summaq are treated on the same footing as “the must’amina sects like the Christians” rather than as the rest of the Muslims, despite being recognized as Muslims on account of the conversions. For context on the term must’amin, it is a category of person distinguished from the dhimmi (a Christian or Jew with permanent residence in Islamic lands under a dhimma pact and thus paying jizya tax to an Islamic government of some sort) and a mu’ahid (a disbeliever who has a non-aggression pact- ‘ahd- with the Muslims). A short posting explains here:

“As for the must’amin, it is the one who has neither a dhimma nor ‘ahd with us, but rather we have given him security in a defined time, like a man from Dar al-Harb [non-Muslim lands] who has come to us in security for business or the like..”

In other words, must’amin means a non-Muslim considered to be residing in Islamic lands on a temporary basis with security guarantee while not paying jizya. There is disagreement among the schools of jurisprudence about how long the security guarantee lasts, beyond which jizya may have to be paid. It is most likely that the Dar al-Qada is using the term must’amin for Christians because there is not yet a formal Islamic government/state in the form of an emirate or caliphate to set up a dhimmi pact and terms of permanent residence. One should also note that most if not all Christians have fled Idlib province anyway on account of the rebel conquests.

Below is the Dar al-Qada document translated.

“There is no deity but God, Muhammad is the Messenger of God.
Judiciary council
Dar al-Qada in Salqin

In the name of God, the Compassionate, the Merciful

It is absolutely forbidden for a contract of selling or buying for any agricultural or residential real estate to be ratified or organized by the newly Muslim sects like what was known as the Druze or the must’amina sects like the Christians, except through the Dar al-Qada in Salqin. And in the event of violating this statement for distribution, the person responsible for the violation will face Shari’i reckoning and the contract will be cancelled.

And God is the One behind the intention.

Head of the Dar al-Qada

Dar al-Qada in Salqin
Head of the Dar”

Aymenn Jawad al-Tamimi is a graduate from Brasenose College, Oxford University, and a Jihad-Intel Research Fellow at the Middle East Forum. You can follow him on Twitter @ajaltamimi

This article originally appeared on Aymenn Jawad al-Tamimi’s blog, and you can find the original here.