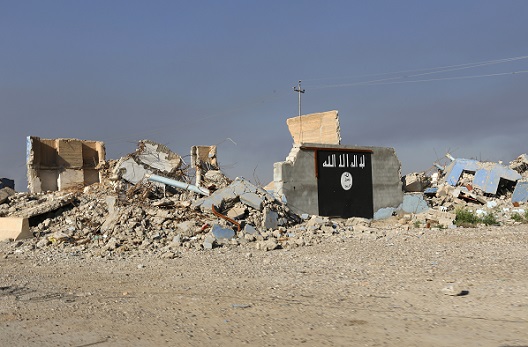 The Islamic State (ISIS) has for the last year besieged regime-controlled areas in Syria’s Deir Ezzor province. ISIS has completely surrounded the regime territory in Deir Ezzor and and has been able to fully blockade the passage of food and trade on the ground, making air transportation—at great cost to the regime—the only medium through which the regime can resupply the area. The fighting between the two sides is fierce, especially the fight for the Deir Ezzor airport, which ISIS most recently attempted to seize in September and October. The regime, in its turn, is defending the airport and neighboring areas, recently with support from Russian aircraft.

Deir Ezzor airport is a regime stronghold in Eastern Syria, an area where it has lost most of its territory to ISIS. The airport is the third largest in the country and is located six miles (ten kilometers) southeast of Deir Ezzor City. When the opposition forces began to try to force the regime out of Deir Ezzor, the airport was turned into a military installation, housing a large military arsenal and becoming the main hub for arms, ammunition, personnel, and food supplies for the regime-controlled neighborhoods in the city.

Geographically, the Deir Ezzor airport is in a strategic military location that gives it an advantage against attack. This is the reason why, since the beginning of 2015, ISIS, has dedicated many of its resources to draining and exhausting regime forces through a blockade. Currently, ISIS forces surround the airport, allowing them to enact the blockade and deny the entry of food supplies and trade to the area.

The regime-controlled areas in Deir Ezzor are key areas that ISIS seeks to control. Earlier in the year, ISIS and the regime had an implicit truce ensuring that the regime did not bomb the oil and gas fields in the eastern areas—one of the key sources of ISIS funding in the region—in return for the regime having access to al-Omar and al-Tayim oil fields. However, both the military and political situation changed after the direct Russian intervention in Syria to protect Assad. Russia’s intervention, as well as their declaration with the Syrian regime, Iran, and Iraq to fight terrorism, has only increased the strategic importance of the Deir Ezzor airport as a as a military installation for both military operations and for providing logistical support to regime forces in the heart of the ISIS-controlled territories. After this statement, the airport became a center for launching wide-ranged military operations against ISIS—pushing the latter to change its priorities and military plans. ISIS is well aware of the strategic danger posed by the Deir Ezzor airport to its areas of influence in Syria, and has made taking control of the airport a priority of utmost importance for the group.

The Assad regime’s need to protect the airport stems not only from its military potential, but also because it is a vital supply line for its forces in Deir Ezzor province. It is the regime’s first line of defense, and the guarantor for its control over the Western neighborhoods of the city. The airport is also strategically located near oil and gas fields, and the continued presence of Assad’s forces provide a key pressure point to ensure the continued supply of its share of oil and gas under threat of bombing the fields. Of these fields, the regime previously had access to the al-Omar and al-Taym oil fields as well as the and the Kunuku refinery, but recent fighting has limited its access to al-Tayim only. The airport’s central location also connects, by air, the areas under its control in Eastern Homs and Hasaka provinces. Overall, the Assad regime clings to this location as an advanced attack base to propagate itself as a key partner in any international coalition in the fight against terrorist.

In December 2014, ISIS launched its first attack on the Deir Ezzor, but regime forces repelled the attack. After this failed attempt, the battle front between ISIS and the regime remained relatively quiet except for occasional clashes and mutual artillery bombardment. In September 2015 ISIS launched another attack, followed by another in October, both of which failed and in which forty-eight and 133 ISIS fighters died, respectively. Following these attacks, the regime also began bombing, al-Tank, al-Melh, and al-Safaqa oil wells in response. The airport’s strategic value to ISIS means that it continues to be an important target. Taking the airport would repair its damaged image, boost the morale of its fighters, and enhance its recruitment efforts after its successive defeats in northern Syria in Ayn al-Arab, Tel Abyad, and Hasaka. The moral boost and safe access to the oil wells would also help diffuse the growing dissent threatening its stability among the populations under its control in eastern Syria.

Since the Russian intervention in Syria, fierce fighting has broken out between ISIS and the regime. In addition to regime air strikes, Russian aircraft have bombed ISIS strongholds in both the city and suburbs of Deir Ezzor, while on the other side, ISIS continues to shell the airport. For the regime, the airport is a crucial component in its attempt to increase the area under its control ahead of the negotiations scheduled for the new year, in an effort to showcase to the international community that it can both control the country and fight terrorism.

ISIS, on the other hand, lacks the capabilities to continuously provide military supplies needed for its war effort. The loss of fighters in Syria and Iraq and increasing difficulty in moving their military convoys as they are being targeted by the US-led coalition and Russian air strikes are putting increased pressure on ISIS. Alongside this, ISIS must also maintain control of the Deir Ezzor population, which has refused to swear fealty to it. Unless ISIS is able to gather significant reinforcements and resources in Deir Ezzor, it is unlikely that the group will be able to advance or continue to pressure the regime forces, and as a result may lose access to the oil wells under their control in Deir Ezzor.

Justice for Life Observatory in Deir Ezzor is a Syrian NGO that produces reports about and documents events in Deir Ezzor. It works through a network of civil society activists in the province of Deir Ezzor.