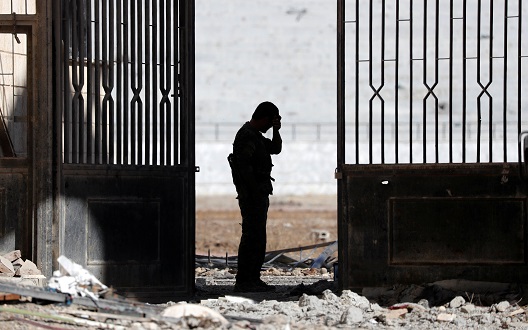 Deir Ezzor today is a complex variable in the Syrian equation, particularly since the opposition wrested control of the province from Syrian President Bashar al-Assad’s regime in 2013 followed by Islamic State (ISIS, ISIL, or Daesh) control in 2014. Deir Ezzor now contends with several forces trying to control it: Russia works to manage its conflict with the United States through Syria, legitimizing its presence through the Assad regime in cooperation with Iran and to some extent with Turkey; meanwhile the United States works to advance its agenda in the region by supporting the Syrian Democratic Forces (SDF). In addition to these geopolitical dynamics, on the domestic side ISIS enclaves continue to infiltrate and destabilize the area.

The two main competing forces—the Syrian regime and Russia from the south versus SDF forces backed by the United States from the north—have largely liberated the eastern Deir Ezzor province from ISIS control.

Many Deir Ezzor residents feel that the struggle over their province stems from the importance of its natural resources. Ward Murad (pseudonym), a civilian activist from Deir Ezzor, says, “Under-the-table international negotiations are under way to determine the fate of Deir Ezzor and who will control its oil-rich territory.” Jalal al-Hamd, director of the local human rights organization Justice for Life, points to Deir Ezzor’s strategic significance as a Sunni-dominated border area between Syria and Iraq, “in addition to its oil, gas, agricultural, and animal resources.” Activist Omar al-Deiri (pseudonym) also highlights the province’s large geographical scale that encompasses the Syrian desert.

Evidence suggests that Deir Ezzor is the stage where competition between the SDF and the Syrian regime will play out for control of the area. Al-Hamd ruled out competition escalating to the point of clashes between the parties. Riyad Darrar, the co-president of the Syrian Democratic Council (the political wing of the SDF), agrees with al-Hamd, but warns that the Assad regime has offered support to some factions in the province to attack the SDF. “We are working to avoid this by holding meetings with the Deir Ezzor clans to allow them administrative control over their area,” he said. In early February, the United States used air strikes to target an Assad-controlled base north of Raqqa (along the eastern Euphrates) after regime forces attacked the SDF headquarters in Deir Ezzor.

The militarization of the Syrian revolution led to the dominance of military forces, overshadowing the opinions of those in civil society and forcing civilian dependence on the security they provide. This pattern highlights the failure of the democratic transition that peaceful protesters had demanded at the start of the revolution. Riad Darrar believes it is too early to talk about the fate of Deir Ezzor. “The battle for liberation is not over and ISIS can still carry out reprisal attacks. The city is completely destroyed, and there is a desperate need for reconstruction. The SDF and Assad’s forces could possibly take joint control of the area—while preserving the separation boundary—and come to an agreement on movement between the two zones,” he said.

Most Deir Ezzor residents agree that SDF-controlled areas are relatively safer than those under the regime. Darrar notes that villages and towns controlled by the SDF have seen returnees. Services are provided by coalition forces and humanitarian organizations under the direction of the local Civil and Legislative Councils whose members were elected in February 2018. Al-Hamd also believes the SDF areas to be the safest, while the areas of the regime lack security for fear of bombardment and the return of ISIS, in addition to the fear of retaliation by Syrian forces after the return of mandatory conscription to the area. On the other hand, Omar al-Dayri points out that the people of Deir Ezzor are worried that Kurdish-dominance in the SDF will lead to a new national conflict.

So far, no forces have identified a vision for Deir Ezzor, but associates close to SDF forces hinted at the possibility of annexing Raqqa and Deir Ezzor into one region of control.

Deir Ezzor lives in a constant state of instability, which led to mass displacement of its population. According to al-Dayri, their return will not be easy without guarantees that ISIS has left the region. Displacement from Deir Ezzor is an important point: al-Dayri notes the large wave of displacement during the war against ISIS. The Center for Justice and Accountability estimates the number of displaced from Deir Ezzor at about 200,000 people; after the return of the Assad regime. Most are distributed in the SDF-controlled province of Hasaka and areas controlled by the Euphrates Shield forces in the Aleppo and Idlib countryside with a few returns from IDP camps. Al-Hamd says the return to Deir Ezzor is the hope of all the people of the province, but this also requires the provision of security and services, job opportunities, and removing the threat of ISIS reprisals against the civilian population. This outcome necessitates a radical political solution and a transitional phase that will help people return and resettle.

Al-Dayri also believes that Deir Ezzor needs a local authority to lead the next phase. It needs a new social contract after ISIS destroyed the social fabric in the province when it mobilized tribes to support its militancy against other tribes, in addition to committing massacres against the Shuaitat residents who stood against it. Salma Saleh, another activist from Deir Ezzor, says there is no clear understanding of the future of Deir Ezzor. The battle is not over, and it is between three parties (the regime, the internationally-backed SDF, and ISIS pockets). “The picture is still incomplete,” she said.

Murad warned against underestimating ISIS, noting that the organization is regrouping on the outskirts of the city. “This could facilitate its ability to launch attacks on the province, which will negatively affect stability,” he said. Al-Dayri agrees with the assessment that ISIS pockets will likely carry out suicide bombings and sabotage operations that threaten civilians.

The situation in Deir Ezzor remains unpredictable, and the transition to full civilian control unsure. Recent reports suggest that the regime and its allies staged their February 7 attack, which the United States pushed back with air strikes, hoping that Kurdish elements of the SDF would pull back to defend Afrin from Turkey. As long as the situation remains tense, the conflict will overshadow any civil authority. “No one can predict what will happen to civilians or their desire to choose their own ruler because there is no democratic atmosphere,” Saleh said. “If the people of Deir Ezzor had their choice,” she says, “they would choose people from the area who are keen to have a positive impact.”

Sardar Mlla Drwish is a Kurdish journalist from Syria who specializes in visual, audio, and print media. Follow him on here @serdar_melah.