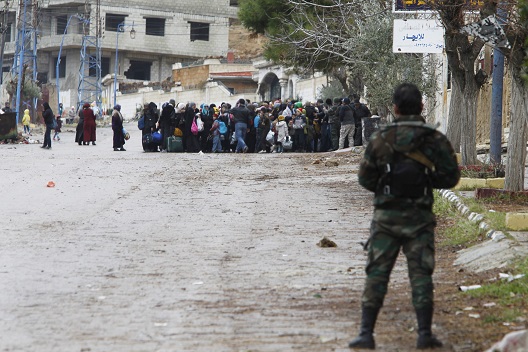 Photo: Syrian Army soldiers monitor residents who said they have received permission from the Syrian government to leave the besieged town as they wait with their belongings after an aid convoy entered Madaya, Syria, January 14, 2016. Aid was sent on Thursday to the Syrian town blockaded by pro-government forces and two villages besieged by rebels for the second time this week, and a U.N. official said he hoped to make more deliveries to areas where people are starving. Dozens of trucks left Damascus for the town of Madaya at the Lebanese border, and the two villages of Kefraya and al-Foua in rebel-held Idlib province. Tens of thousands of people have been trapped in the areas for months. REUTERS/Omar Sanadiki

The Syrian regime is working to secure the Damascus areas, starting with al-Zabadani at the Lebanese borders towards Homs and the suburbs bordering al-Asi (Orontes) river, which Hezbollah has entrenched itself it. The regime is also working to strengthen its grip on the coastal cities Tartous and Latakia, which are the stronghold of the Alawite sect, up to the Turkish border. These areas make up what the regime has called “useful Syria.” This is in line with the regime’s plan B of building an Alawite quasi-state, in case regime forces are not enough to regain control for all of Syria.

The regime pursues demographic change to build a support base for itself and regain popular legitimacy. The regime uses practices including shelling residential complexes and infrastructure, committing violent massacres to terrorize civilians, and sieges. The goal is not simply to displace local residents from their neighborhoods, but rather to then replace them with loyalists and strengthen the presence of pro-regime foreign fighters in regime-held territory.

This plan springs from the inability of the regime to control the main urban centers. It is displacing disloyal residents from these areas to strengthen the regime to build support bases, especially ahead of elections.

Following the pattern of battles in Syria shows that the Syrian regime is fighting in the areas that fall within the borders of its Alawite quasi-state, even during the ceasefire. In contrast, it does not fight as fiercely in the eastern territories, the eastern desert, or al-Jazira. For instance, the regime lost control over the provinces of Deir Ezzor and Raqqa more than three years ago, yet its forces did not launch any significant assaults to regain these areas. Only recently the regime advanced on Palmyra and al-Qariyatain, but it is not clear whether it will continue to expend its forces further east.

According to Siege Watch (a PAX and Syria Institute run project), the Syrian regime has about 54 cities under siege, which it uses to change the demographics of these areas. The regime displaces the local residents and negotiates with the opposition to exchange the non-loyalist residents for loyalists. For example, Ahrar al-Sham and the regime forces together with Iranian and Hezbollah fighters agreed, under UN sponsorship, to move a number of families from the city of al-Zabadani to Idlib. Meanwhile, a number of families were moved from Kafreya and al-Foua in northern Idlib, which the opposition had under siege, to pro-regime areas. In another agreement, a number of Syrian opposition members were moved together with their families from Old Homs and al-Wa’r neighborhood to rebel-held Homs countryside.

The regime also uses sieges to displace residents that are not pro-regime. Abu al-Joud is an al-Zabadani resident whom the siege forced, along with his family, to relocate to Turkey. According to him, only a few of the original residents of al-Zabadani were left in the city, after more than 40,000 were displaced and moved to the nearby towns of Madaya and Bloudan.

Al-Zabadani and the surrounding areas are strategically important to the Syrian regime and Hezbollah. They want to secure the area because of the nearby weapons warehouses, to fortify the loyalist cities along the Syrian-Lebanese border, and to maintain the roads connecting the area to Damascus.

In January 2016, Hezbollah built a new base in Marj al-Tel, close to al-Zabadani. It forced all residents on the road from al-Zabadani to Madaya to evacuate their houses. Hezbollah destroyed some the houses and left the others empty, and then built the base. According to some state army fighters, who spoke with local activists, the base is under the control of Hezbollah and regime fighters are not allowed into the base, despite the base flying the Syrian flag.

In enforcing its policy of demographic change, the regime also uses legal tools. Legislation No. 66 of the year 2012 specifies the reconstruction of Eastern Mezzeh neighborhood after designating it as being slums in violation of residential codes in Damascus. However, the Mezzeh residents say that the project in fact aims at redrawing the neighborhood demographics. The neighborhood, especially Mezzeh Basateen, is strategically and politically important because it is the southwestern gateway to Damascus. It also houses the buildings of government ministries. However, most of the area residents support the opposition. In contrast, the project excludes the western area, called Mezzeh 86, which is predominately Alwaite, even though it is also a slum and not compliant with residential codes.

In late 2015, the regime started to send eviction warrants to Mezzeh residents so it could start demolishing buildings. The regime promised each family a monthly allowance of 30,000 Syrian Liras ($158) for five years until the area is rebuilt. However, the residents say they never received any payments and that the stipend does not cover rent in Damascus.

Maha Hadidi, a Mezzeh resident who recently moved from Damascus to Turkey, said that government bulldozers, supported by security forces, demolished a number of houses in Mezzeh Basateen, to force the other residents to leave. The project threatens to displace more than 200,000 residents, she added.

The regime relies on members of its Alawite sect and the families of foreign fighters to secure its quasi-state. Pro-regime foreigners are increasingly visible in Damascus. The regime recruited them from Iran, Afghanistan, Lebanon, and Iraq to fight in Syria. “Damascus is no longer what it used to be. It is now buzzing with several dialects and languages including the Iraqi dialect, Persian, and Afghani. New religious practices are also introduced, which shows the Shi’a transformation of Damascus, enforced by the regime and the Iranian embassy. Old Damascus has become a destination for religious pilgrimages,” said Hadidi.

To justify the presence of foreign fighters and the demographic shift underway, Bashar al-Assad said in speech on July 26, 2015, “Syria is for those who defend it,” and that, “All of my supporters, regardless of their nationalities, are Syrians, whether they are Iranian, Lebanese, or Afghani,” he said.

The regime employs other legal tools to make the demographic change without the use of force. It introduced new laws making military service obligatory for youth and reduced the age threshold. Because of this, the regime-controlled areas are devoid of the youth who preferred to flee and seek refuge outside of Syria rather than serve in the military.

Hossam al-Khaled, a 25-year old Damascus resident, says he fled to Lebanon two months ago, in fear of being drafted, in spite of being medically exempt due to an illness that prevents him from doing intensive combat training. He says that the regime recently began implementing a campaign to draft youth by setting security checks everywhere, even at the bakeries.

The Syrian regime employs several practices to introduce demographic change and is taking advantage of the displacement of Syrians to secure areas within “useful Syria.” The aim is to build a safe haven to launch a support base for Assad. Without this support base, Assad will not have the legitimacy and popularity needed to govern Syria, even if he is able to retake the country with the aid of Russia, Iran, Hezbollah, and foreign fighters.