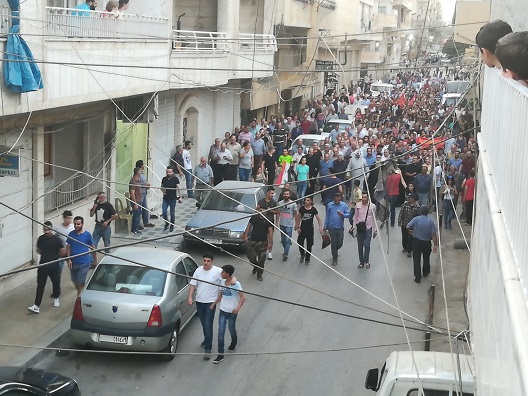 Prominent Assyrian Christian writer and dissident Souleman Yusph was in his home in northeastern Syria’s Qamishli last Sunday night when local security personnel reportedly burst in, arrested him, and carried off his laptop and cell phones with them.

By the following Thursday night, sixty-one year old Yusph—a vocal critic of the majority-Kurdish Self-Administration that controls the vast majority of Hasakah province, as well as parts of neighboring Raqqa and Deir e-Zor provinces—had been released, later seen reuniting at home with tearful family members in photos shared via social media.

Assyrian community news pages and family members blamed Sutoro, an ethnically Assyrian police force associated with the Self-Administration that controls this relatively calm corner of Syria. A statement by Sutoro just one day after Yusph’s disappearance denounced citizens who “overstepped” their rights to free speech “in our society and on social media,” but did not name the writer or explicitly mention his arrest. The charges against him are still unknown.

The detention, however brief, ignited a flurry of angry social media posts, and was highlighted by the US-based Committee to Protect Journalists advocacy group. Local residents and minority rights activists called for Yusph’s release, criticizing what they described as a politically motivated imprisonment.

The Assyrian Policy Institute, a rights advocacy organization, meanwhile denounced Yusph’s arrest as “yet another attempt to quell…understanding of how the Kurdish Self-Administration’s draconian policies are harming those living under its self-imposed authority.”

Yusph is a member of Syria’s Assyrian Christian minority, an ancient ethno-religious community estimated to number in the hundreds of thousands. A sizeable number of the religious group’s members live in areas of northeastern Syria now under Self-Administration control, where several Assyrian figures—including Yusph—say they are increasingly denied certain political freedoms.

Assyrians and other Christian minorities have long enjoyed at least nominal religious freedoms under the rule of Bashar al-Assad and, now in the country’s northeast, under the Self-Administration—though often at the expense of any real political standing, local activists and members of the religious group tell Syria Direct.

“In Syria, there are always religious freedoms coupled with political restrictions,” says Yusph, who spoke again with Syria Direct following his release and interview last Sunday prior to his arrest.

Education is a Red Line

The Self-Administration is a Kurdish-led governing body in charge of Syria’s autonomous northeast. Its constitution, adopted in 2014, establishes no official religion, and enshrines residents’ rights to practice their faiths “without persecution.”

Since late August however, northeastern areas of Syria have seen a simmering dispute between Kurdish-run authorities and local Christian minority communities. The Self-Administration announced a decision that month to shut down more than a dozen private schools run by the Assyrian church and other Christian denominations across Syria’s northeast that had yet to adopt the Kurdish-led authority’s newly established curriculum.

At least one hundred Assyrian demonstrators and local residents soon took to the streets in Qamishli in protest against the decision, arguing that enforcement of the allegedly pro-Kurdish curriculum was a thinly veiled attempt to limit their minority community’s political rights.

By late September, Isa Rashid, another local Assyrian figure who directs church-run schools in Qamishli, was reportedly beaten outside his home and hospitalized. Photos shared via social media showed a bloodied sidewalk where the incident occurred.

And though majority-Kurdish authorities later walked back the decision to shut down schools, multiple Assyrian activists tell Syria Direct that such restrictions have them worried about the longevity of the historic community within Syria.

“There are many question marks surrounding the future of the Assyrians,” Yusph said in his interview with Syria Direct last week.

According to Syria’s constitution, which was adopted in 2012, Syria has no official state religion. However, the previous constitution in place from 1973 until 2012 stipulated that the president be Muslim and that legislation be drawn from Islamic jurisprudence.

In practice, Syrian Christian minorities have long had some freedoms to worship and observe holidays as they please—religious freedoms that Assyrian community leaders in the northeast admit they still enjoy under Self-Administration rule.

“As Assyrians and as Christians, we practice our holidays and other activities as normal, without any disturbances,” Marwan Shukri, who oversaw northeastern Hasakah province’s system of Assyrian church-run schools before the war, tells Syria Direct.

But at the same time, he argues, Christian groups—and particularly non-Arab minorities that include Assyrians, Armenians, and others—have been “deprived of their national and political rights” in Syria.

According to Yusph and local minority rights activists, chief among those political rights is a school system tailored to their community’s unique cultural and historical background—a right that is vital to their identity.

“I studied in Assyrian schools,” one twenty-five year old Assyrian Qamishli resident, who requested anonymity for fear of reprisals by Self-Administration-affiliated authorities, told Syria Direct. “The Assyrian schools are what formed my identity and brought me closer [to my community].”

“People here have dealt with water and electricity shortages, but they won’t accept interference in the education system,” the resident added. “Education is a red line.”

For many Assyrians and other non-Arab Christians in northeastern Syria, proper education means maintaining a longstanding system of private, church-run schools that still adhere to the Syrian government’s state-mandated curriculum from before the war. The old system, multiple community figures argue, is both internationally recognized and grants freedoms such as teaching of historic and liturgical languages including Syriac and Armenian.

Though the Self-Administration officially recognizes the Syriac language historically spoken by Assyrians as an official language to be allowed in Christian school curriculums, Assyrian activists who spoke to Syria Direct say concerns over imposition of the Kurdish-run local authorities’ recognized curriculum makes them worried for their community’s future viability in northeastern Syria.

“This is just one of the ways that Christians who still remain in Hasakah province are being restricted,” says Jamil Diarbakerli, director of the Sweden-based Assyrian Monitor for Human Rights.

Elizabeth Kouria, who helps run a local Self-Administration-affiliated Syriac language foundation in Hasakah province, defended the newly imposed curriculum, saying it would include instruction in Syriac and that it was an improvement on the old, state-run system.

“The curriculum that was forced on our schools since the end of the 1960s imposed the nationalist Baathist Arab model,” Kouria tells Syria Direct, describing a “model of exclusion and distortion of history.” An official from the Self-Administration-affiliated Syriac Union Party did not respond for comment.

Minority groups’ opposition to the Self-Administration is not necessarily new. In 2015, nearly a dozen churches and Assyrian organizations in Hasakah province released a statement warning that new property laws and compulsory military conscription introduced by local authorities would lead to “sectarian strife.”

That same year, gunmen aligned with the Kurdish Democratic Union party reportedly assassinated Dawoud Jundo, a commander in the loosely pro-Baathist Assyrian Khabour Guards militia, which runs a number of checkpoints in Assyrian-majority areas and villages.

Then, in January 2016, local Kurdish-led security forces attacked a series of checkpoints in central Qamishli that belonged to a Syrian government-affiliated branch of the Assyrian Sutoro police force, local media reported at the time.

“It’s as if what happened, and is still happening, is focused on areas with a majority-Assyrian and Armenian Christian population as a form of ‘punishment’,” Yusph tells Syria Direct.

Shukri, the former director of Hasakah’s Assyrian church-run schools, concedes that the clashes and recent tensions don’t reveal any underlying racism on the part of Self-Administration authorities. “In general, things are good,” Shukri says. “We can’t say that there is discrimination between Christians, Assyrians, Arabs, Muslims or Kurds.”

But he and other Assyrian figures do tell Syria Direct they fear that continued political restrictions on the area’s Christian minorities could spell the loss of ethno-religious minority groups as more and more families choose to emigrate. “People should stay to preserve this land and its ancient heritage, which makes the area rich with coexistence,” Shukri suggests. “However, conditions on the ground are making things difficult, and people are leaving for the sake of their children.”

Christian minorities have long emigrated from Syria over the past century, Yusph says, although ongoing conflict in Syria and a lack of stability in the northeast means “opportunities [for return] are currently limited.”

“How are people expected to return to an unstable country, to uncertain futures?” he adds.

Ammar Hammou is from Douma city in outer Damascus. He studied journalism at Damascus University and left Syria in 2011.

Madeline Edwards graduated from the College of Charleston in 2016 and previously reported for The Daily Star in Beirut.
This article originally appeared on Syria Direct. Read the original here and follow Syria Direct on Twitter.