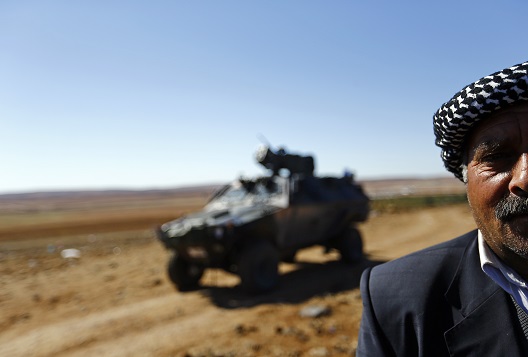 Over the summer the Kurdish-led Autonomous Administration (AA) focused on strengthening its hand in talks with the Syrian government, in an attempt to win concessions on self-rule before a potential withdrawal of US support. Among other escalatory actions, the AA inserted itself into service provision initiatives previously left to the state, and arrested dozens of candidates for local elections organized by Damascus.

But starting in October, Turkey’s bombardment of AA territory in northeast Syria, combined with Erdogan’s renewed threats of invasion, could prompt Kurdish leadership to stop the escalations and consider an unfavorable deal with the regime. The AA has previously given Damascus territory to avoid a Turkish assault, and the American response to Ankara’s recent attacks has not reassured AA officials their interests are secure. What Kurdish officials decide to do depends largely on the following question: as the Islamic State (ISIS) loses the last of its Syrian territory and the war heads towards a political settlement, how will the US position its support for its anti-ISIS partner relative to NATO ally Turkey, and American policy goals—including a lasting ISIS defeat and reducing Iranian influence?

The Complicated Relationship Between Damascus and the Kurds

The Kurdish Democratic Union Party (PYD), which makes up the core of the AA, has enjoyed an informal non-aggression pact with the Syrian regime dating back to the beginning of the conflict. The government ceded much of its northern territory to the PYD in 2012. The two sides carried out independent campaigns against ISIS and rebels, but view each other with hostility and have clashed on several occasions due to competing interests.

Throughout the war, Damascus has projected power far beyond its physical control in Kurdish-held areas, in large part via centralized service provision initiatives. It is the sole issuer of internationally-recognized civil records; continues to nominally pay public sector salaries; and repairs water and electricity infrastructure.

These policies convince some residents of the regime’s strength and inevitable return. Syrian state media regularly reports on the success of the al-Hasakah governor, a regime figurehead, in improving services for the province without ever mentioning the major impact of the AA. Additionally, loyalist elements are present within the AA’s military wing, and the regime’s favorability among certain Arab tribes remains steady.

Buoyed by rapid victories in the Damascus suburbs and Daraa, Assad turned to his self-described “final problem” in May and offered the Kurds a choice: sit down for talks or “be liberated by force.” Hasakah-based journalist Ivan Hasib likened the regime’s offer to “reconciliation agreements in opposition areas,” less a negotiation than a forced surrender. AA officials agreed to negotiate. Delegations traveled back and forth between Damascus and Qamishli; one of the unofficial centers of the Kurdish movement.

Time is not on the Kurds’ side when it comes to inking a deal. In October, Syrian officials had indicated that they planned to wait out an American military presence and then dictate terms to the northeast’s administration, with force if necessary. They would be well positioned to do so in the event of a US withdrawal, as the AA would lack allies and be threatened by imminent Turkish invasion—as well as ISIS cells, and a local population and military allies that are not universally supportive of their rule. The ongoing presence of US troops in northeastern Syria is a bulwark against all of these dangers.

US President Donald Trump said in March that he planned to pull troops out of Syria “very soon.” But indications of US support continued over the summer: convoys of military aid poured into AA territory for the Syrian Democratic Forces in July, while an estimated 2,000 American troops built up military bases. Additionally, diplomats visited Manbij and Kobani—a target of Turkey’s recent bombing campaign. Statements by US officials in September suggested the president agrees to a longer presence in northeastern Syria for now.

This summer’s boost in American aid does not guarantee a lasting US footprint, but it did give the AA confidence to push back against rigid Syrian posturing during negotiations. Syrian officials were openly dismissive of their negotiating counterpart’s position. Damascus’s delegation seemed to view the Kurdish request for talks as “coming from a place of weakness” and “refused all details of self-administration,” according to an anonymous Kurdish journalist in al-Raqqa province. Hasakah based journalist Hasib noted that the regime delegation refused to entertain the AA’s core demand: a federalist self-administration.

In response, the AA carried out an escalatory campaign to pressure Damascus to take talks seriously, by asserting control over local services starting with education. The AA imposed its own curricula in primary and lower secondary schools across its territory in 2015; with the exception of Assyrian Christian schools, which were allowed to continue teaching official government curricula. This policy permitted the regime to retain a foothold in educational initiatives in AA areas. Recently in August, the AA threatened this foothold by closing Assyrian Christian schools under the pretext they were unlicensed. Two months later Kurdish security forces took over government health clinics in al-Hasakah city, one of the few symbols of state power left outside of the small regime-held security square.

In addition to reclaiming control of certain educational services, in September the AA reasserted its local political authority by arresting dozens of candidates for municipal elections organized by Damascus in al-Hasakah province. These elections were held in accordance with Law 107, which the regime passed at the conflict’s beginning to give nominal autonomy to local councils, particularly in service provision and economic development. Syrian officials had stressed that the AA could be incorporated under the state’s existing structure via Law 107.

During negotiations, the regime suggested the AA participate in the September municipal elections as this would have been a step towards political integration as the regime envisions it. While not objecting to Law 107 in principle, Kurdish leadership recognized the current implementation strips it of any meaning. So AA officials refused to take part in the government-organized elections, and also arrested candidates running.

As a final blow, the AA announced a “new Autonomous Administration” in September, which includes the Arab-majority contested areas of Tabqa city and parts of Deir Ezzor province. Control over the Tabqa Dam and Deir Ezzor’s oil fields are among the AA’s strongest bargaining chips. The “new AA” announcement implies a threat to retain control of these important resources; resources the Syrian government needs to improve its dire economic fortunes after the war.

These actions by the AA push the regime to negotiate in good faith by progressively weakening its narrative of expansive state power and influence in the northeast, as well as the rest of the country as it seeks to reassert authority. The longer the regime waits to strike a deal, the more control the AA will take over remaining government institutions, effectively undercutting Assad’s leverage in negotiations.

In the aftermath of Turkey’s recent bombardment, the US has tried to placate both its NATO ally and local SDF partner against ISIS. American troops continued running patrols near border areas to deter further Turkish attacks, while the State Department offered millions of dollars for information on top PKK leaders. This mixed response unnerved the AA. Parties affiliated with the PYD described the State Department bounty as “unjust” and “criminal.”

If Kurdish leadership feels US support is inadequate to protect their interests as the fight against ISIS winds down, they will be inclined to stop escalating against the regime and instead move into its orbit, as one AA official suggested. They might even offer Assad a deal tilted heavily in his favor: the PYD previously gave the government territory near Manbij to avoid a Turkish assault, and made a similar offer during Ankara’s Afrin offensive.

However, based on American activity over the summer, it is likely that the Trump administration will continue to tie a military footprint to goals that extend at least into 2019: combating Iranian influence, a lasting ISIS defeat, and facilitating a political transition. Pursuing the latter two goals could involve ongoing support for the AA, for example sending convoys of military aid or further base construction.

In this case, the AA is likely to continue its escalatory tactics, undercutting Assad’s authority and leverage as he is deprived access to crucial economic resources. This might make the government more willing to offer concessions beyond the implementation of Law 107 and recognition of Kurdish cultural rights. Alternatively, Damascus might opt to wait out even a long term American presence, and in the meantime retaliate against the AA by cutting state salaries, scaling back service provision, restricting access to humanitarian aid, or through covert military action.

The future of the Autonomous Administration has been in the hands of the United States for four years. As ISIS loses the last of its Syrian territory, the Trump administration will have to decide where the AA fits into its policy goals, and Kurdish officials will react accordingly to secure their administration’s future.

Dan Wilkofsky is a Syria analyst and former editor at Syria Direct. He’s on Twitter as @Dwilkofsky1.

Image: Photo: A Turkish Kurd watches the Syrian town of Kobani as a Turkish army vehicle passes on a hill near the Mursitpinar border crossing, on the Turkish-Syrian border in the southeastern town of Suruc in Sanliurfa province October 21, 2014. REUTERS/Kai Pfaffenbach