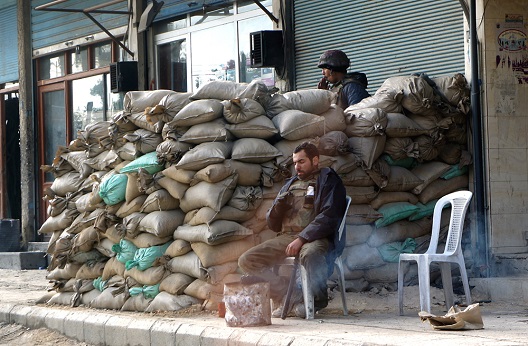 Since 2011, the Syrian regime has kept thousands of Syrian men in its military service as emergency forces—serving for an unspecified period—and refusing to discharge successive batches of army conscripts; some of whom have served for eight years in compulsory service. If they do not comply, they can be charged with a criminal offense and imprisoned for up to three years. In order to avoid fighting in the regime’s forces, Syrian youth have resorted to fleeing their country and the compulsory military service. Those who flee are considered military deserters according to Syrian law, and arrested if they return.

However, in October of last year, Bashar al-Assad issued a legislative decree that grants a year of amnesty to defectors from the regime army and from compulsory and emergency service. It declares that the punishments for 800,000 violators of military service are dropped; including those who refused to fight in the regime’s ranks. The decree’s text reads that the general amnesty covers “the full punishment of those guilty of desertion within the country and outside of it.” However, to benefit from this decree a condition must be met: they must surrender themselves to the regime within a specified time period. The regime specified that the maximum grace period is four months for those who fled within Syria, and six months for those who fled outside the country. Otherwise, the criminal charges are not dismissed.

Thousands of Syrian youth in the country welcomed this decree wholeheartedly, especially many whose lives had come to a complete stop after they were forced into hiding. However, their joy was brought short after the regime created a loophole in the decision and issued new lists of those summoned for emergency military service. These new lists—which contained 400,000 names of individuals who were called for emergency military service—included a large number of youths whose names had just been cleared under the amnesty.

This issue garnered angry reactions on social media, especially from Syrian youth who were recalled for emergency service. Many felt mislead by the regime who seemed more intent on improving its international image; without actually changing how its administration operates domestically.

Ra’id, a 35-year-old from al-Kiswah city in Damascus countryside who fled to avoid his military service, told SyriaSource, “News of the amnesty reached me, and for the first time in four years I came out of hiding and went out to the streets to get my life in order. I got my life back and could live near my children normally.”

However, that relief was short lived for Ra’id and many others as he found himself back on conscription lists. “The situation did not last more than just seven days, after which I was re-enlisted for emergency service. I don’t want to serve in the regime army, and I don’t want to be a tool in a war I don’t believe in. I just want to live peacefully with my family.”

A local activist in Zakiya, Damascus countryside, said to SyriaSource that the police station and mayor sent immediate mobilization cards to 506 residents aged between 28 and 38. They were to report to the local conscription office to serve their emergency military service within the regime forces’ ranks. He added that most of the names on the new list had not reported for emergency service for several months, and that the general amnesty decree canceled their summons. This measure violates the reconciliation agreement that was reached with the towns in Damascus countryside. Hundreds of youth were summoned to serve in the regime forces outside of their areas; even though the regime had previously promised that they would serve within their areas only.

We Want to Be Discharged

The regime stopped discharging drafted men for compulsory military service since the start of the conflict in 2011; including officers along with rank and file members. This despite the fact that the required term of service before the conflict was for no more than two years. As a result of this policy, all of the soldiers have served continuously until now—some of them for more than eight years.

On social media, voices from within the regime’s forces have called for discharging those whose service has gone on ceaselessly. This campaign has met with widespread popular support and has its own Facebook page titled “We Want to Be discharged” and the hashtag “Discharge Us!” The campaign revealed deep anger within the Syrian army’s ranks. A group of regime soldiers, who have been serving since 2010, launched the campaign. They are asking to be discharged and to return to civilian life as large numbers of them have been killed in the war.

This campaign also launched another hashtag under the title: “It is my right to live, it is my right to be discharged, Group 102.” This is in reference to the oldest group of conscripts, who started their service in 2010 and have still not been discharged. One of the soldiers wrote: “Discharge us. Seven years is more than enough. By God we’re tired. Discharge us.” Meanwhile, one of the soldiers’ mothers commented: “My sons’ future is lost, they scarified their lives for the sake of the country. It’s their right to return to their homes.”

The general amnesty sparked anger among other regime fighters, who felt that the amnesty stole their right and gave it to those who have not defended the nation. They feel that they have defended the country for years, whereas those who fled will take advantage of the amnesty. Attempting to calm the regime ranks, Minister of Defense Ali Abdallah Ayyub said, while attending the People’s Assembly, “The Ministry is looking into discharging all the emergency-conscripted groups and not keeping any soldier after today.”

The decision to grant general amnesty for those who have failed to complete their military service comes in the context of Assad’s efforts to: quickly improve his external image, break his international isolation, and rebuild his international and regional relations; because doing so will reinforce his military victory. This also comes in light of Arab nations beginning to normalize relations such as the United Arab Emirates, reopening its embassies in Syria, Tunisia urging members to re-admit Syria back to the Arab League, and other nations discussing the possibility of reestablishing relations with Assad. The regime is striving to appear reformed, tolerant of its people and opposition, in order to gain international legitimacy. This, in turn, will enable Assad to manage the reconstruction process and control the funds contributed to it.